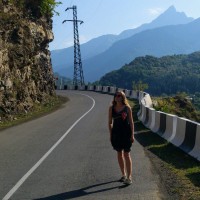 Georgia was born more than 2,5 thousand years ago, the first capital for a long time was Mtskheta strategically located between the hills with access for ships. Today it is a small, but very charming village, with sightseeing reminding visitors that once it was a magnificent city, the birthplace of Georgian Christianity and Georgian language.

During our excursion we will visit beautiful and very romantic parts of Mtskheta - the oldest temple of the country Svetitshoveli. You will taste the real Georgian sweets churchhella (the best I found during years of living in Georgia) and will learn legends about Saint Nino and wonderful temple of Cross called Jvari. City is located quite close to Tbilisi, surrounded by beautiful countryside and green mountains. The trip will take around 3-4 hours, after visiting the city you can have a traditional dinner in restaurant near the Mtkvari river.

When we are back in Tbilisi, lets stroll down the old town. My city is very ancient, and still young in its life. Tbilisi is very unique in the way that it’s kind of “stucked” between Asia and Europe, between Islam and Christianity, and to add even more complexity it was part of the Soviet Union for almost half of the century.

I will show you some secret places of Tbilisi, we will walk along the narrow chaotic streets and climb to the top of the fortress, visit the old temples or walk along rather modern boulevards sometimes full of street arts. Afterwards you can discover the pleasure of sulfur baths or the atmosphere of small wine cellars, everything is up to you.

The city of contrasts, the city of history. It’s Tbilisi.

And you are welcome any time!

Group size: 1-3 by car, 4+ by minibus or other transport can be organized according to your needs + different price

Lunch: we will stop by traditional restaurants