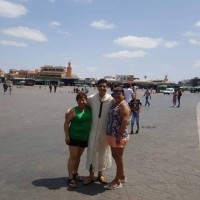 Discover the city of Marrakech in this enlightening full day tour. Immerse yourself into the history, art and culture of this magnificent walled pink city. Photograph the magnificent Koutoubia mosque with its great square tower and shining copper globes. Stroll along the bustling alleyways and see the mosques, traditional bakeries, old lodging houses and fountains carved of wood. Visit the Medrassa ben Yousef as one of the largest theological college in north Africa. Walk through the alleys of the Medina and visit the most interesting handicrafts quarters , see an enchanting display of arts and crafts in the colorful souks before you relive the atmosphere of a glorious age in the exquisite rooms. By the way Marrakech is an ideal starting points of many marrakech excursions and sahara desert tours.

Menara Gardens: (pic 4)Covering an area of 250 acres, they are full of olive trees surrounding a large central lake that dates back from the 12th century and is fed by a network of irrigation channels. At the water’s edge is a small Saadian pavilion. With the snow covered peaks behind it, this is a breathtaking sight in the evening when it catches the golden rays of the setting sun.

Koutoubia mosque (pic 1) is one of the largest, most beautiful mosques in the western Muslim world. The tower is 69 m (221 ft) in height is a Hispano-Moresque masterpiece that is very similar to the Giralda of Seville, and has a lateral length of 12.8 m (41 ft). Six rooms (one above the other) constitute the interior; leading around them is a ramp by way of which the muezzin could ride up to the balcony. It is built in a traditional Almohad style and the tower is adorned with four copper globes.

El Bahia Palace (pic 2) is a beautiful building and an excellent example of Eastern Architecture from the 19th century that represents trends and standards of the wealthy who lived at that time. It was built for Ahmed Ibn Moussa (or Ba Ahmed) between 1894 and 1900 in the Alawi style that was popular at the time.For seven years around a thousand craftsmen from the Fez region worked on the palace. The only sections open to the public are the apartments of the sultan’s favorite concubine, the council chamber (with tiled walls and illuminated cedar wood ceiling) and the great central courtyard (paved with marble and decorated with zelliges and fountains).

The Saadian Tombs: (pic 3) in Marrakech date back from the time of the sultan Ahmad al-Mansur (1578-1603). The tombs were only recently discovered (in 1917) and were restored by the Beaux-arts service. The tombs have, because of the beauty of their decoration, been a major attraction for visitors of Marrakechwith their delicate decorations and pure architectural lines are considered by many to be a beautiful feat of architecture. They were first built to house the tombs of the Saadian Sultan, Ahmed el Mansour. In 1591 the first “koubba” of this burial ground was built south of the Kasbahs.

The Majorelle Garden (pic 5) is filled with colorful walkways, ponds, cactus and plants as well as a beautiful shop with hand-made goods. The Majorelle Gardens are a lush, garden estate designed by Jacque Majorelle and maintained by Yves Saint Laurent. The Majorelle Garden, previously the Jardin Bou Saf, bears its name from its original creator, Jacques Majorelle, the French expatriate artist who was born in Nancy France in 1886.

(pic 6) A traditional meeting place for peasants and merchants from the Sous region, the High atlas and the South has become the heart of Marrakech. In the mornings this large square is crowded with fruit and spice sellers, guerrab with their leather water bottles and metal drinking cups, basket sellers, ironmongers and Barbers. In the afternoons come the Gnaoua dancers descended from former Guinean slaves, musicians, story tellers, snake charmers and entertainers with performing monkeys!

the price is defferent between person to other.