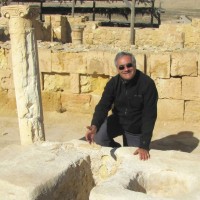 We’ll start from visiting Tzipori, one of the most exciting national parks in Israel. We’ll walk through the well-preserved Roman streets to visit houses and villas of Jewish nobility lived here 18 hundreds years ago.

We’ll stroll down the Roman Main Street to the Nile House, where gorgeous mosaic depicts the Nile River Festival. And just nearby – the Amazonas – full of fierce energy and ready to fight. Another highlight is the “Mona Lisa of Galilee” with her enigmatic smile, created with hundreds of small stones in dozens of natural shades she peers out from the distant past. We’ll visit the sixteen hundred years old Synagogue which mosaics, still full of life, tell us the Biblical story in dynamical pictures flourishing with color and life.

And, finally, we’ll explore the gigantic Water Supply Tunnel that brought water to the city for hundreds of years from the surrounding mountains.

We’ll continue trip through the Galilee Mountains to the town of Zefat (Safed), which has played a major role in the history of the Jewish religion and is as the city of Kabbalah and its tradition. Today the small mountaintop town is, once again, a center of Jewish spirituality but also of the modern life as well.

Walking through the Historical Trail of Zefat to visit is most famous synagogues, some dating from the 16th Century, among them – Ha Ari, Abuhav and Yosef Caro Synagogues. We’ll visit on our way large and vibrant Artists’ Colony, where some of Israel's best known artists and artisans make their homes.

And finally we should not miss visiting the famous Tzfat' Cemetery. People come here from all over the world, to sit, pray, simply be in the company of the great rabbis who are buried there. The most famous of these rabbis is Rabbi Isaac Luria, also known as the ARI, one of the most famous Kabbalists of all times. Below the ARI's grave is that of Rabbi Yosef Caro, who is best known for writing the Shulhan Aruch, the Code of Jewish Law. In the same area near the ARI is Rabbi Moshe Alsheich, best known for leading the movement to reaccept Jews who had been forcibly converted to Christianity, and who pledged reentering the Jewish World. Also next to these great Rabbis is Rabbi Shlomo Alkabetz, who is best known for composing the Lecha Dodi song which is sung by the Jews worldwide every Friday night to welcome in the Sabbath.

We shall continue travelling towards the Sea of Galilee to visit Capernaum, a remnant of the once thriving Jewish community This is one of just few places where the remnants of the Jewish population had managed to survive almost total destroy of the Land of Israel by the Romans, and to continue their thriving communal life alongside with the growing Christian influence. The Synagogue dating the 5th Century, and well preserved, is just one of many examples of that continuous Jewish tradition.