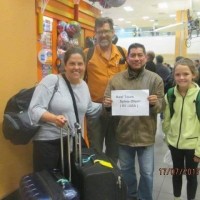 Sunday May 27th: Guayaquil - Baltra Rancho Primicias & Twin Craters Upon arrival in Baltra Airport transfer to Santa Cruz, a guide will be waiting for You to take to the hotel, where You can leave your luggage. We will seize the morning to visit the Rancho Primicias in the island’s highlands where we will be able to see Giant Turtles in their habitat

Then we go on to Lava Tunnels “ There are eight lava tubes on Isla Santa Cruz “ The largest lava tubes in the Galapagos are on Santa Cruz Island, it’s estimated that the last eruptions occurred around a million and a half years ago. There is a gigantic lava tunnel that is over 2000 meters long on the Island that many tourist visit and walk through

Los Gemelos ( Twin Craters ) are located in the highlands of Santa Cruz Island. They are not actual craters caused by impact, but are sink holes that were created when the volcanic roof of empty magma chambers collapsed from tectonic shifts and erosion over time. This area has very different climate from other parts of the island and are surrounded by scalesia ( scalesia pedunculata ) forests, which our tour guide kept calling “broccoli trees.” It is the habitat for bromeliads, orchids, mosses, lichens and many birds. Here, you are able to find the famous vermillion flycatcher, 8 species of Charles Darwin finches, and every so often short - eared owls.

Afternoom Grietas & Tortuga Bay we will Hike through a forest of enormous cacti and over rugged lava rock formations to one of the most unique swimming holes in the Galapagos Islands. Las Grietas, which translates literally to mean " The Cracks, " is a series of volcanic crevices that were formed during the cooling of molten lava. The porous lava stone of the island allows water to filter down from the highlands into Las Grietas where it mixes with sea water filtering in from the ocean. The resulting azure waters are crystalline and refreshing Las Grietas is a popular swimming destination for locals and visitors alike. Float blissfully in the cool water -- or get your adrenaline pumping by jumping from the new wooden platform. A Naturalist Guide is not required to visit as the trail has been improved, but it is not recommended to travel alone as the jagged lava rocks en route can be tricky.

After Lunch we will walk to Tortuga Bay It’s located on the Santa Cruz Island, about a 20 minutes walk from the main water taxi dock in Puerto Ayora, The walking path is 1.55 miles ( 2,490 m ) and is open from 06.00 to 18.00 p.m evening, we must sing in and out at the start of the path with The Galapagos Park Service Office, Tortuga Bay has a gigantic, perfectly preserved beach, that is forbidden to swimmers and is preserved for the wildlife where many Marine Iguanas, Galapagos Crabsand Birds are seen dotted along the Volcanic Rocks. There is a separate cove where You can swim and where it’s common to view White Tip Reef Sharks swimming in groups & on occasion Tiger Shark The Genus, Galeocerdo, is divided from the Greek galeos, which mean Shark and The Latin Cerdus, The Word for the hard hairs of Pigs. It is often colloquially called the Man – Eater Shark. The Galapagos Shark a top other species of Shark that are found in The Galapagos Islands, There are always a large variety of small fish and Birds Meals: Lunch & Dinner

Monday May 28th: San Bartolome Island from 06.00 a.m. to 17.00 p.m. Bartolome Island ( Spanish: Isla Bartolomé ) is a volcanic islet in the Galapagos Island group. It is a volcanic islet just off the east coast of Santiago Island. It is one of the " younger " islands in the Galapagos archipelago. This island, and Sulivan Bay on Santiago island, are named after naturalist and lifelong friend of Charles Darwin, Sir Bartolome James Sulivan, who was a lieutenant aboard HMS Beagle. With a total land area of just 1.2 square kilometres ( 0.5 square miles ), this island offers some of the most beautiful landscapes in the archipelago. The island consists of an extinct volcano and a variety of red, orange, green, and glistening black volcanic formations. Bartolomé has a volcanic cone that is easy to climb and provides great views of the other islands. Bartolomé is famous for its Pinnacle Rock, which is the distinctive characteristic of this island, and the most representative landmark of the Galápagos. It has two visitor sites. At the first one, one may swim and snorkel around Pinnacle Rock; the underwater world there is really impressive. Snorkelers are in the water with the penguins, marine turtles, white-tipped reef sharks, and other tropical fish. The bay is also an excellent place to go swimming. The twin bays are separated by a narrow isthmus. Galapagos penguins are frequently seen, and a small cave behind Pinnacle Rock houses a breeding colony. Seasonally, Bartolomé is the mating and nesting site for the green turtles. With herons, they make use of the gentler beaches. The Galápagos lava cacticolonize the new lava fields. Meals: Brakfast, Lunch & Dinner Tuesday May 29th: Santa Cruz Island to Isabela Island ( Flamingos Lagoon & Sea Kayaking with Pinguins ) a.m. Transfer to The Pier to catch the speed Boat to Isabela Island, It’s the largest Island of The Galapagos with an area of 4,640 square kilometers (1,790 sq mi ), and length of 100 kilometers ( 62 mi ) almost four times larger than Santa Cruz, the second largest of the archipelago. It was named after Queen Isabela of Spain. It was originally named Albemarle after the Duke of Albemarle. The island strides the Equator. Isabela is also interesting for its flora and fauna. The young island does not follow the vegetation zones of the other islands. The relatively new lava fields and surrounding soils have not developed the sufficient nutrients required to support the varied life zones found on other islands. Another obvious difference occurs on Volcan Wolf and Cerro Azul; these volcanoes loft above the cloud cover and are arid on top.Isabela’s rich animal, Bird and Marine life is beyond compare. Isabela is home to more wild Tortoise than all the other islands. Isabela's large size and notable topography created barriers for the slow - moving tortoises; apparently the creatures were unable to cross lava flows and other obstacles, causing several different sub - species of Tortoise to develop. Today, Tortoises roam free in the calderas of Alcedo, Wolf, Cerro Azul, Darwin and Sierra Negra

In the afternoon we take our ocean kayaks and paddle out to the pier of Isabela, a set of small islets within Isabela Bay. The islets are filled with wildlife and are home to the Galapagos penguin, the only penguin that lives in equatorial region. We will also see sharks, marine turtles, sea lions, Blue Footed Bobies and much more wildlife as we explore its many small coves and beaches. Meals: Breakfast, Lunch & Dinner

Wednesday May 30th: Tunnels & Wall of Tears After breakfast we will go to the pier for a 45 minute fibra ( a small boat ) ride to a place where Lava flow impacted with the oceans waves to form the stunning tubes and bridges of Los Tunnels. Los Tunneles is a marine paradise for the White tipped Reef Shark, Manta Rays, Parrot Fish, Yellowtail Surgeon Fish, Galápagos Green Sea Turtle and the Galápagos Sea Lion. This site is one of the most is one of the most spectacular places for snorkeling in Isabela as the water is shallow, clear and calm. This marine sanctuary is characterized by its unique geologic formations. A series of lava flows have produced a number of arches and tunnels both under and above water, where you find a number of animal species that have taken up residence in these magnificent formations. As soon as you get to the intertidal starting point you will be released to snorkel through astoundingly beautiful site.

The Wall of Tears ( Spanish: El Muro de las Lágrimas ) is a historical site 5 km west of Puerto Villamil on Isabela Island in the Galapagos Islands, Ecuador. It was constructed between the years of 1945 and 1959 by prisoners in the Penal Colony on the island, which had been established by President Jose Maria Velasco Ibarra in 1944, using infrastructure left by the US military after World War II. The wall is about 25 m ( 65 ft ) tall and is said to have been the cause of thousands of deaths during its construction. Locals call it the wall of tears because it is said to emanate eerie cries and have a heavy energy surrounding it. Meals: Breakfast, Lunch & Dinner

Thursday May 31rst: Isabela Island – San Cristobal Island This morning take a short flight to one of the oldest of the islands in the Galapagos archipelago, San Cristobal. Land in Puerto Baquerizo Moreno, a coastal town and the administrative capital of the islands. After trying some of the local cuisine we drive to a beach called La Lobería. We will be able to see the sea lions sunning, playing and competing for our attention. If you can not wait to get in the water, this is his first opportunity. As the sun sets, we will return to the city where they will prepare for a welcome dinner at a small local restaurant, we recommend You seat next to The Pilot for nice pictures on air Meals: Breakfast, Lunch & Dinner

Friday June 01rst: Leon Dormido ( Kicker Rock ) This day we will get a glimpse of the underwater world of the Galapagos. First we are going on a walk along the coast in the pot to identify shorebirds, as the largest frigate and the famous blue-footed booby. Then we will anchor in a channel called Isla Lobos or near Sea Lion Island where we get our wings and go in search of damsel fish, puffer fish, and, hopefully, curious sea lion pups. From there we continued to Kicker Kicker Rock or as it is known by locals to explore the final remnants of a tuff cone 148 meters high. Along the edge and through this channel compact ashing, we'll be on the lookout for sea turtles, eagle rays, starfish, and, with a little luck, Galapagos sharks, blacktip sharks, White tip sharks, hammerhead sharks. Puerto Grande, a beautiful beach accessible only by boat, is our second stop of the day. After lunch on board, feel free to spend your time swimming in the turquoise waters or taking pictures of rock in the distance kicker. We went back a second time to Kicker Rock for our second snorkel Meals: Breakfast, Lunch & Dinner

• All breakfasts and meals as described in the programme

• All transfers and land transportation

• All bilingual guided tours ( English - Spanish ) as described in the itinerary