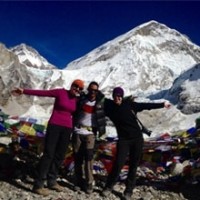 Upper Mustang Trekking is an exotic tour and one of the most mysterious and popular trek in Nepal. It has been described as desert in Nepalese Himalayas. ’’Mustang’ is a Tibetan derived word meaning ‘fertile plain’ in Nepali. Geographically, It is located in north of Annapurna at an average altitude of 4,000m and culturally the part of Tibetan plateau. The landscape of Mustang is dry, naturally carved sandstone pillars and discontinuous moraine terraces, these all present naturally a colorful variety made up of red, yellow and brown together. The trekking to Mustang is through an almost treeless landscape and infertile landscape. You experience the strong wind blowing across the area as it is a rain shadow area of Nepal.

The most convenient way to get to upper Mustang is to fly from Pokhara to Jomsom and start the trek from here. The flight is an attraction in itself, flying through the deepest gorge in the world. The Upper Mustang Trekking is a perfect destination for visiting oldest Buddhist monasteries and many historical caves and Himalayas beauty. This semi-autonomous is a heavily Tibetan influenced region. This trek brings you into the hidden world of the old Buddhist kingdom of Mustang, also called Lo.The trek to Lo-Manthang (walled capital)is almost through treeless barren landscape ,a steep rocky trial and downhill, panoramic view of Nilgiri,Annapurna,Dhaulagiri and several others peak make your trek memorable. Upper Mustang is also known as “the last forbidden” kingdom of Nepal”. Landscape here is extremely beautiful. Lifestyle of people, who have been residing calmly, even in such harsh environment, has its own charm. Lo-manthang, Choser Cave and Ghar Gompa is the major attraction of upper mustang trekking. Tiji is greatest festival in Mustang region. It will be unique privilege to witness the same color, costume, dancing and rituals that were displayed by these people in this place more than 600 years ago.

Before 1991 upper mustang was a restricted area for foreigners to enter. Nepal department of immigration started a small number of special trekking permits since 1991.Nowadays foreigners are allowed and upper mustang has become the best attraction for tourist around the world. You can do camping trek and tea house trek. Tea house trek is comparatively least costly however; nowadays lodge to lodge stay is also available. So get ready to explore this exotic trekking route with Trekking Planner to make it more convenient and memorable.