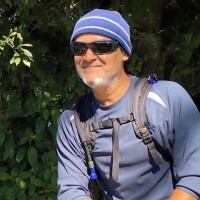 The locals say is a meteorite embedded on one side of the hill. No matter the origin La Peña (Spanish for crag) de Cayaguanca is a great way to know one of the most scenic regions of El Salvador: Alotepeque-Metapán Mountain Range, right on the limits with Honduras, straight North San Salvador.

Start the hike from the colorful and traditional mountain village of San Ignacio. Walk through fincas, communities, milpas (corn fields) and see how real countryside is. Greet the friendly and tireless peasants while ascending on the sides of the hill towards this massive hump outlined on the landscape.

Once on top -on a clear day- you see distant towns, villages and valleys, lakes, plantations and volcanos. After the hike visit the town of La Palma, well known for their beautiful and colorful handcrafts many of them inspired on the style created by artist Fernando Llort.

La Palma also had a role in El Salvador recent history when in 1984 the town’s church hosted the first round of negotiations between Salvadoran government and the Guerrillas on 1984, during Civil War.

It was on early 70s when a young painter, Fernando Llort, moved to La Palma.

Some time later he funded a handcraft workshop to teach skills to locals and help their families economy  and development. This workshop was named The Seed of God, a seed that grew to turn into The Tree of God, a cultural center and school for artisans.

With the pass of the years the colorful, modernist and childish style Llort created became a symbol of national identity for Salvadorans.

Llort's art work has been awarded and displayed in  prestigious museums and galleries around the world.

In La Palma you can always get a nice replica for a reasonable price.