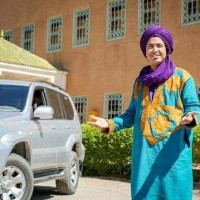 Upon arrival, we’ll collect you and drive to Casablanca where you’ll visit the Hassan II Mosque, the largest outside Mecca and experience the coastal Cornish seaside. Afterwards, we’ll leave for Rabat, the capital of Morocco. Here, you’ll see the Hassan Tower, the Oudaya Kasbah before checking in to your Riad at the heart of the Medina. Overnight in our Hotel/Riad.

After breakfast in your hotel you can start the raod to Chefcahouen, for to get there in the mid day for  exploring the medina of  Chefcahouen. A beautiful unique city with its white washed walls and its blue doors and windows. Unlike many part of Morocco, this city was occupied by Spain and the influences of Spanish civilisation and architecture are all around. You’ll also have the opportunity to meet locals and walk in this beautiful Medina. Overnight in your Riad.

After breakfast We will then depart via Volubilis, the Roman ruins and Moulay Idriss, the holy town. Then Meknas we will take a tour of the Medina including El Hdim square, Bab El Mansour, the massive gate which is the entrance to the old city and the Jewish quarter, the Royal Granaries & the city rampart. Night in your accommodation.

After breakfast in your Riad, you’ll start exploring the oldest city in Morocco browsing its alleys and small streets. Our visit starts by visiting the Royal Palace gate, the Jewish headquarter and the first Mellah ever built in Morocco. We will ensure that you visit all the sites with cultural and historical interest including the famous Al Qaraouine University – the oldest in the region, the Tanneries and the Attarine museum. After lunch, you’ll see the ceramic factory and experience a wonderful panoramic view over the whole Medina of Fes. In the afternoon, we’ll visit the new city” La Ville nouvelle” for a drink. Overnight in our Hotel/Riad.

After breakfast we’ll leave Fes travelling towards Ifrane, a beautiful mountain village, referred to as “the Switzerland of Morocco”. During this journey you’ll experience glimpses of the Middle Atlas and Higher Atlas mountains.  Stopping at Azrou – a Berber village in the middle of the famous cedar forest (the largest in Morocco, you may well have the chance to see some Barbary apes. Afterwards we’ll travel through the Tizi Ntalghamt Pass to Midelt and along the magnificent Ziz Gorges carved through volcanic rock.

After  lunch in your hotel you’ll travel to Merzouga via Errachidia and Erfoud. You’ll be travelling via the Ziz Gorge, taking in views of the High Atlas plateau, noting how the scenery changes to reveal hints of the desert as you approach the city of Errachidia. Afterwards, you’ll travel along the luxuriant Ziz Valley, stopping for panoramic views along the way to Erfoud and Rissani.  Arriving at Merzouga in the afternoon, you’ll be welcomed with a glass of mint tea before checking in to your Riad.

After breakfast in the Hotel you can start exploring the area. You’ll visit the Gnawa people, originally slaves brought from Sudan, to experience their music and lifestyle, whilst not far away there’s the lake of Merzouga with its bird populations. You may also want to visit the nomad wire house where many Berber handicrafts are priced lower than in the big cities. In the afternoon it’s time for your camel trek, guided by an experienced camel man as you set off to explore within the sand sea of Merzouga. Dinner is in front of the tent where you will spend the night (the camp in equipped with flash-toilets and shower).

Your camelman will wake you up early in the morning to watch what well may be the best sunrise of your life after which you’ll camel-trek back to the village of Merzouga admiring the unique beauty of the spectacular Erg Chebbi sand dunes – changing with the light as the day progresses. After breakfast in the Riad, you’ll leave for Rissani, Tinghir and Todra gorges – the highest, narrowest gorges in Morocco. Lunch in the heart of the gorge precedes a drive through the Dades Valley towards Kalaa M’gouna and Ouarzazate. The route through Dades Valley is the way of the thousand Kasbahs – providing numerous opportunities to take some of your best photographic shots of the trip. We’ll stop at Kalaa Mgouna, “the rose city”, to purchase the rosewater, which will make your linen smell good a long time after your trip is over. Overnight in our Hotel/Riad.

After breakfast in the hotel we’ll drive through high Atlas  On your way to Marrakesh you will stop in co-operative of Argan oil and Overnight accommodation will be in a local Riad.

Breakfast is in your Riad, before a tour of the town. You’ll visit the Skala Fortress, the port, the souks and see Thuya wood carved by artisans, walking through the alleys of the medina and past the hundreds of handicrafts. Essaouira is known for its strong winds most of the year so it is known as the “City of the wind” thus it attracts surfers from all over the world. Essaouira knew many civilisations – including the Portuguese occupation, which affects much of its architecture – however, it remains a small village with much history. Because of its size and its characteristic blue doors and washed walls, it is also regarded as Morocco’s “Jewel of the Atlantics. Our visit includes the Mellah – the Jewish headquarter, and the beach. There is an annual festival of “Gnawa music”, where many musical groups come from different parts of Africa and the world. Usually it starts in the third week of June, so if your trip coincides with this, you have the option to extend your stay for an extra day. Today you will have lunch in a Moroccan way, bought fishes ‘cooked to order’. The afternoon’s free to walk and explore by yourself then road to Marrakech. Overnight accommodation is in Riad in the Medina.

We will spend the morning at leisure for shopping or relaxing in Marrakech before leaving mid afternoon to arrive in Casablanca by 4pm (or if you have a departing flight or want to spend time in Casablanca we can leave Marrakech at your convenience). End of the trip...

● Pick up and drop off in Casablanca airport

● 10 days private and exclusive services of vehicle with AC

● Local guide in Fes and Marrakech

● Sand-boarding in the dunes

For any questions, please don't hesitate to contact us. We are waiting forward to hear from you.