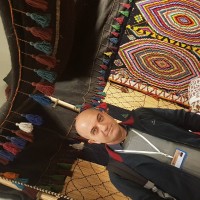 Lalish is a small mountain valley situated in the Shekhan District of Nineveh Province north of Iraq. It is the location of the tomb of Sheikh Adi ibn Musafir, main figure of the Yezidi faith – pilgrimage site of the Yezidis – one of the most mysterious people in the world. The ancient rituals of this people are fascinating and they are considered by many to be the remnant of the original religion of Kurdistan.