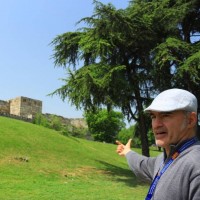 The city of Ohrid is situated in south-western part of Republic of Macedonia and its the largest city on Lake Ohrid.

Ohrid is the 8th largest city in the Republic of Macedonia with around 50,000 inhabitants andit is notable for once having had 365 churches, one for each day of the year, and has been referred to as a "Jerusalem of the Balkans".

The city is rich in picturesque houses and monuments, and tourism is predominant.