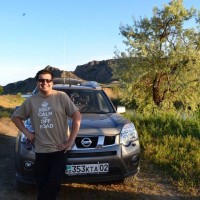 Kok Tobe Tower - An aerial tramway line connects downtown Almaty with a popular recreation area at the top of Kök Töbe (Kazakh: Көк-төбе, which means 'Blue Hill'), a mountain just to the southeast. The city television tower, Almaty Tower, is located on the hill. It has a variety of tourist attractions, such as a zoo, amusement-park-style rides and restaurants.

The Medeu is an outdoor speed skating and bandy rink. It is located in a mountain valley (Medeu Valley, or the valley of Malaya Alma-Atinka River) on the south-eastern outskirts of Almaty, Kazakhstan. Medeu sits 1,691 metres above sea level, making it one of the highest skating rinks in the world.

Shymbulak is a ski resort near Almaty, located in the upper part of the Medeu Valley in the Zaiilisky Alatau mountain range, at the elevation of 2,200 metres (7,200 ft) above sea level. The resort area is about 25 kilometres (16 mi) south of Almaty city by the Medeo road. It is popular for its mild climate, a large quantity of sunny days and a great amount of snow through the winter (from November till May).

Big Almaty Lake is a natural lake located in Trans-Ili Alatau mountains on 2511 above the sea level near Almaty (15 km South from Almaty). Like a majority of lakes in Trans-Ili Alatau, this lake formed as the result of an earthquake. The lake is a major source of drinking water for the region.

Entrance fees (Medeo\Shymbulak\Kok-Tobe) are not included.