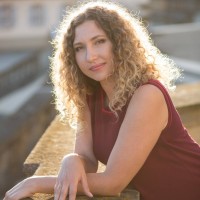 @The house of the “weeping widow” (sometimes called “Arshavsky House”) is a building in Kyiv, an architectural monument of local importance, situated at Liuteranska Street, 23 (the corner with Bankova Street).

The building was constructed in the style of early modernism by the architect Eduard-Ferdinand Bradtman at the expense of the merchant Sergei Arshavsky in the summer of 1908.

@Chocolate House is one of the most mysterious mansions in our city. The building has been colored in the unusual way. The predominance of brown color gives the possibility to name the mansion as Chocolate House. Its story is similar to the story about the Gorodetsky’s House with Chimeras. No common people had been allowed to visit Chocolate House for fifteen years. In Soviet times the Central Civil Registration Office was situated there.

@The Polish architect Władysław Horodecki originally constructed the House with Chimaeras for use as his own upmarket apartment building during the period of 1901–1902. The name does not refer to the chimaera of mythology, but to an architectural style known as chimaera decoration in which animal figures are applied as decorative elements to a building. Horodecki unique architectural style earned him praise as the Antoni Gaudí of Kiev.

@The Kyiv office of the State Commercial Bank was founded half a century ago, in 1839. Later a large one-storey house built in Empire style in Institutskaya street was purchased for the Bank.

Such architects as O.Kobelyev, P.Holandskyi and V.Gorodetskyi (the famous designer and owner of the Fancy House (1901-1903)) participated at the tender for the best design. The Kobelev's design was ackowledged as the best one and the work started. Later, architekt Verbytskyi, who designed the main facade, joined the group.