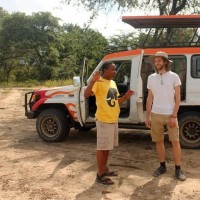 Pick you up from your hotel and drive to Lake Tarangire National Park. Lunch and game drive in Tarangire National Park. The Park derived its name from the Tarangire River that rises in the highlands of Central Tanzania and winds its way through the game sanctuary. The animals come by thousands from as far north as the shores of Lake Natron to the bank of this river, significantly swelling the resident population with wildebeest, zebra and eland, elephant, hartebeest, buffalo and fringe-eared Oryx. During the dry season, the Tarangire pools are clotted with thirsty migrants, and the elephants begin to dig for underground streams in the dry riverbed. Tarangire National Park is said to have the highest recorded number of breeding bird species for any habitat in the world. Dinner and overnight at Panorama Safari Camp Meal Plan; Lunch, Dinner.

After breakfast you’re off to the famous Serengeti National Park, home of the Great Migration. Your drive today is spectacular as you drive up the crater highlands, stopping at the rim for a birds-eye view of the spectacular Ngorongoro Crater. Continuing on, as you crest the hillside, spread out before you, as far as the eyes can see, is the vast Serengeti. Serengeti mean “endless plains” in Maasai language. Large predators including lions, cheetahs, and hyenas are drawn to the area by this abundance of prey which migrates throughout the park. On the way into the Serengeti you will stop at the famous Olduvai Gorge, where Dr. Louis and Mary Leakey made their discovery of the first man that walked the earth. After enjoying lunch, evening game drive in the Seronera. Dinner and overnight at Seronera Public Camp. Meals plan; breakfast, Lunch and Dinner.

Enjoy early morning game viewing in the vast Serengeti plains where you may encounter the migration consisting of over 2 million animals. They also attract the attention of predators like cheetah and hyena and you may be able to see a band of lion’s gang up for a hunt. Drive back to the Camp for breakfast then leave with your lunch box and depart to Ngorongoro crater Rim with game on route Dinner and overnight at Simba Public Camp. Meals Plan; Breakfast, Lunch Dinner.

After breakfast, descend to the Crater floor for game drive. Ngorongoro Crater is the largest collapsed volcanic crater in the world and fourteen kilometers of isolated natural beauty. Ngorongoro Crater is surrounded by a ring of extinct volcanoes and the floor, dotted with watering holes, shelters some 30,000 animals. You can expect to see lions, elephants, Zebras, Hippos, Flamingos, Jackals, Rhinos Antelopes and many birds. The birds seen here include eagle, vulture, and flamingos in the Crater Lake, stork, bats, giant vulture, sacred ibis, kori bustard, blacksmith plover, long necked heron and the cattle eagle. Picnic lunch will take place at hippo pool. Ascend to the rim and departure for Arusha where the tour will end. Meals Plan; Breakfast, Lunch.

• Pick /drop hotel before and after the trip

• The services of our knowledgeable English speaking driver/guide,

• Drinking water, Safari transport by 4 x 4 (6 seat) with a roof hatch that pop up to enable easy game viewing and photography,

Not included in the cost:-

• Soft drinks, alcoholic and other beverages,

• Optional activities not outlined on the itinerary.

• Items of a personal nature e.g. laundry, tips and etc,