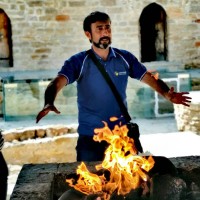 On this trip I will take you to an old village hidden in the bosom of the Caucasian mountains.To Lahij village!

Meeting in loby of your hotel.

Faster your seat belts.Let us move!😊

We will move to the north part of Azerbaijan.

Our first stop will be next to Diri-Baba mausaleum.This amazing structure is one of the wonders of Azerbaijani architecture.The mausoleum is built into rocks on the side of a hill and has an anciet cemetery nearby.The surounding area is rich in caves.The two-storey sepulcher was built in 1402.

Next stop will be in Shamakhi district.We will visit the oldest mosque in Azerbaijan: Juma Mosque which was constructed in 8th century.

Hope you are interested to get more information about Shamakhi so let us visit Seven Domes on the hill next to city: The graves of last rulers(khans) and their family members.

Then possible to stop in local cafe for a cup of tea.😊

After this part of our road crosses from forested mountains.

Do you wish about adrenaline.🔥😊

Lahij, a village 190 km away from Baku, is one of the most beautiful mountain village visited by foreign and local tourists.

This village is located on the southern slope of the Greater Caucasus, 1,505 m above sea level. It’s located in Ismailli region of Azerbaijan. Turn off at the big signpost, which gives clues to the support and travel up the 19km dirt road which winds up the Girdimanchai river gorge. In a winter time ice and snow cut off Lahij for weeks.

The mountain village reminds a small medieval city with mosaic streets and streets with white river stones, with improved sewerage and water supply. Here you can see two or three storeyed houses, and public baths.

The name of Lahij came from the legend. Many years ago there was a place people called La. One day there was a very big earthquake and La was flattened. It became nothing, and so was called La-hec. Hec means “nothing” in Azerbaijani. From time to time people came to live in the settlement again, and so it could no longer be called "nothing". The village developed its own building techniques due to frequent earthquakes. Houses have layers of wood built into the walls to act as shock absorbers.

We can spend a few interesting hours in Lahij. Walk along the cobblestone streets, visit the History Museum and the Mosque, browse the shops, have a look the copper workshop or try to visit the carpets cooperative. We can meet there unique hand-made items from copper, adorned with carving in the form of national ornaments, knitted and weaved goods, wood and leather ware, souvenir knives and many other.

Lunch we can have in Lahij village or in cafe which is next to waterfall.

After lunch we will drive back to Baku city.

🔊 Price of this tour is 40$ per person if there are 5 people in group.

🔊 For more details contact me by whatsapp or mail.

See you on tour 🤝