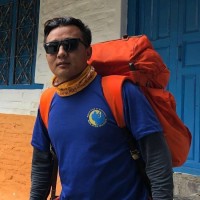 Ama Dablam Base Camp Trek has been designed to take you to some of the prettiest Sherpa villages within easy walking distance of the Namche Bazaar, with the ultimate objective of standing at the foot of the region’s most beautiful mountain. This fascinating Ama Dablam Base Camp Trek to the world’s most beautiful mountain Ama Dablam Base Camp offers superb views of Mount Everest, Nuptse, Lhotse, Ama Dablam, Kangtega, and unforgettable scenery of the Ama Dablam Base Camp. An opportunity to know about Sherpa lifestyle, culture, and religion in Khumbu valley, this trekking route passes through the lovely forest to the world-renowned and sacred monastery of Tengboche. The trail weaves through the famous Buddhist villages and monasteries of the Sherpa people while affording unparalleled views of some of the world’s highest peaks. We explore the region using colorful village inns, maximizing our contact with the Sherpa people. Following trails used by many Everest expeditions, we walk to the famous monastery at Tengboche, one of the finest mountain viewpoints in the world as well as Pangboche, one of the highest inhabited villages on earth. Set at the foot of Ama Dablam, one of the most beautiful peaks on the earth, and home to many famous Sherpa Everest summiteers, where we do a days excursion to Ama Dablam Base Camp (4,576m/15,013ft).

Arrive at Kathmandu International Airport where you will be warmly welcomed by our representative and check in to the hotel. The rest of the day is free to explore this historic and vibrant city. Meals: NO

After breakfast, we depart the hotel for a full-day sightseeing tour of Kathmandu, the “city of glory.” We visit Durbar (Palace) Square, the epicenter of religious and cultural life, an area filled with old temples and historical significance with old glorious Newari architecture. Some of the sights include Kal Bhairav, Hanuman Dhoka, Taleju Temple, Kasthamandap, and Kumari Ghar; home to the Living Goddess. Afterward, we visit Swoyambhunath Stupa, said to be one of the oldest Buddhist stupas in the world, which is majestically set high on a hill overlooking Kathmandu Valley. We proceed towards Pashupatinath Temple, a Hindu temple dedicated to Lord Shiva. This massive temple complex sits alongside the banks of the holy Bagmati River. Only Hindus are allowed to enter the courtyard of the temple, whereas tourists can see the temple from the eastern side of the Bagmati River. Later we visit Boudhanath, a Buddhist Stupa said to be one of the largest in the world. This massive structure stands tall with four pairs of eyes each facing the four cardinal directions, watching for the righteous behavior of mankind and for human prosperity. Meals: Breakfast, Welcome Dinner

Heading for the Namche Bazar, we cross through the hamlet of Zamphute and Tok Tok to see dazzling Thamserku glistening in the sun that stays all the way with us in most of our trek. Passing through the scenic Sherpa villages of Benkar, Chumoa, and Monjo, we reach Utche Choling Gompa on a bluff abutting the Dudhkoshi river and further we make our way between the bluff to the entrance of Sagarmatha National Park, a UNESCO declared world heritage site. Completing halfway to Namche Bazar, we head for the second half of the march that would likely take more time due to the steep climb at the end. Crossing through the last village of Jorsale, a steep stepped path leads us to an amazing high bridge over the Dudhkoshi River gorge, and just before this bridge, the Dudhkoshi is met by its tributary, the Bhote Koshi. Beginning the final steps uphill slowly we reach the heights of Namche from where we can have a first look at Mt. Everest, peering over the Lhotse-Nuptse ridge, and finally after about 1.5km/0.9mile) we reach Namche Bazar. Meals: Breakfast, Lunch, Dinner

It is an ideal place to spend a rest day for acclimatization to the high altitude before heading any further. It is the biggest market for the Everest region’s people and trekkers, situated on the lap of Khumbu Himal range at an altitude of 3420 meters, and is the major regional trading center accommodating the headquarters of the Everest National Park. This place is the home of legendary Sherpas. Being in Namche gives us an imaginary feeling as if we are climbing into the top story full of anticipation about the Himalayas. We can have a fine walk around the valley to adjust to thin air. Namche Bazaar is known as the gateway of Everest. We can go to a museum on the same where we can see the traditional custom of Sherpa people. Besides, a fine view of Everest and other mountains can be overviewed from this place. Meals: Breakfast, Lunch, Dinner

A good acclimatization walk from Namche Bazaar goes to Everest View Hotel, which is at an altitude of 3800m/12540ft. As the name suggests, the hotel gives good views of Everest (when it is not enveloped in the cloud) and this is generally considered the best view in the surrounding area. This is the highest located hotel in the world so it adds an extra treat to the trip. After this, we go on over the hill and reach Khumjung (3970 m) a much more traditional village to the touristy Namche. Sitting at the base of the holy mountain, Khumbila it has many Mani Stones and the old and new Stupas. It also hosts a well known Gumba or monastery that houses what is said to be a yeti scalp. Meals: Breakfast, Lunch, Dinner

We descend gradually to the village of Teshinga, after which the trail drops more steeply to the river, crossing it at the little settlement of Phunki Thangkha (3250m). Climbing steeply we enter the forest and continue with a more gradual ascent, passing a number of mani stones. At the saddle of a hill, we come to Thyangboche at 3867m, from where we have a fantastic panorama of the surrounding mountains including Everest, Lhotse, and Ama Dablam. Thyangboche has long been a sacred spot. The Lama Sange Dorje, who first brought Buddhism to the region, is said to have flown from his monastery in Tibet over the Himalaya, landing here at Pangboche. Visitors should be careful to respect the spirit of this special place. From Thyangboche we descend through rhododendron forests to a small bridge crossing the rushing icy waters of the Dudh Kosi. The trail then climbs slowly to Pangboche (3900m) with stunning views of Ama Dablam ahead. Meals: Breakfast, Lunch, Dinner

Trek back through Kyanjuma to Monzo. Meals: Breakfast, Lunch, Dinner

We descend back down to the river and climb up to Tengboche for one of our last panoramic views of Everest, Nuptse, and Lhotse. The trail then drops down to Phunki Tenga and then climbs through Teshinda to Kyanjuma. The walk back from here to Namche Bazaar is along a beautiful undulating trail high above the Dudh Kosi. Descending through Namche Bazaar, we follow the Dudh Kosi south through rhododendron and pine forests, past Jorsale, Monzo, and Benkar to Chaunrikhara. Here we leave the main trail and climb the short distance to Lukla. Meals: Breakfast, Lunch, Dinner

Flyback from Lukla to Kathmandu and drop at the hotel. This is a leisure day which can be utilized by buying gifts and souvenirs for your friends and family. In the evening you will be invited to join FAREWELL reviewing great photos and share experiences of the trip. Meals: Breakfast, Farewell Dinner

Day 12: Fly back HOME or extend your HOLIDAYS

If you prefer to stay longer, you can consult us for short tours such as game drive at National parks, rafting, mountain biking, Tibet, India or Bhutan tours, etc. Meals: Breakfast

All airport/hotel pick up and drop in private car/van

3 Nights in Hotel Peak Point in Kathmandu including breakfast

8 Nights stay in Lodge/Guest House during the trek.

An experienced English speaking Trekking Guide and a Porter during the trek.

During the Trek, we will have Breakfast, Lunch, Dinner and Tea/Coffee each time only.

Welcome and Farewell Meals and Breakfasts while in Kathmandu.

Airfare from Kathmandu to Lukla and return flight to Kathmandu and domestic flight departure taxes.

Down Jacket and Sleeping Bag that needs to be returned to office after trek completion.

ACH Kitbag and T- shirt for you

Bar bills, laundry, and other expenses of personal nature.