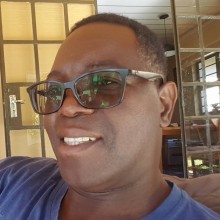 My name is Dulang. I am a Motswana which means citizen of Botswana. A small country in Southern Africa. I am passionate about safari and very determined to develop itineraries that appeals to the current traveller.

I grew up in Maun, herding cattle every school vacations at our cattle post (farm) which was located at the fringes of The Okavango delta. That meant having to deal with all sorts of dangerous animals from big to small; elephants to scorpion. Survival in the bush was a way of life and my grandfather played a mentorship role. He would say for example, ‘ don’t walk nosily you will upset the sleeping lion pride, always scan the area, stop from time to time look around, listen, in this way you will notice for example an upset squirrel, because there is a leopard up in his tree’.

Maun became a tourist hot spot in the 80s and as our homestead was not far from the airport, I would often disappear to admire the well-dressed jeep drivers who picked the mainly white people in his truck. At one point I gunned my courage and went to talk to one of these men. He told me he was a guide, which meant he drives tourists to the delta to show them the animals such as lions, hyenas, different antelopes and so on. I wondered though why tourist didn’t go into our shops or tuck-shop, I did not ask him though.

In 2011 an angle in the form of my guide brother talked to me in turning my hobby into business. He said, ‘you are really obsessed with safari, all these equipment lying around for the most part of the year can be profitable! He needed not to say more, the next day I was busy collecting information! And the rest is history as I resigned from my full time teaching job to start building a successful camping safari.

As a safari businessman, my job entails marketing my tours abroad in fairs such as ITB, Social Medias, Online Marketing platforms, signing contracts, designing safari routes and ensuring that my guests are cared and treated very well by my guides, chef and their assistant while on Safari. The team (safari crew) work together to ensure that the tents are clean, the bed is done and the doors are closed at all times, guests have enough drinking and showering water, cook tasty meals and that the mood in the camp is high! 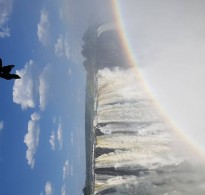 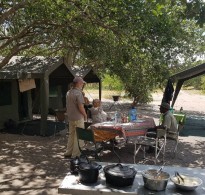