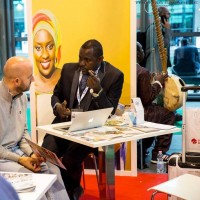 It is an integral wooden structure, dug from the first position of the trunk. Its realization remains mysterious and secret. Some allow villages to communicate with one another; Only insiders can affect this communication

The traditional societies of Diola in Casamance, which gives an important place to the spirit of community and religion, thus based on kinship and the establishment of age groups. Then it is directed by a king then assisted by assistants and so usual that guarantee social cohesion.

ARRIVAL AND TRANSFER TO SALY

After breakfast, departure for typical animist Villages in Casamance: Dioher with its sacred cheese, Ndambalang then continuation to the Ethnic Museum diola in the village of Mlomp lost among the secular cheese makers, then direction on the island of Carabane in pirogue, Former transit center for slaves. Site Paradisiac, with a pleasant climate and luxuriant vegetation in a very favorable environment for the exploitation of fishing in sea and river. Then dinner and overnight at Lodge Carabane.

Departure after breakfast, then transfer by canoe, then visit Ourong Island and then continue to Katakalousse via Capskiring, then visit the craft village. Then lunch free. Relaxation on the most beautiful beach of Senegal. Dinner and overnight at hotel

Departure after breakfast, through the tropical forest, of typical villages Diolas via for the capital of the Gambia (Banjul). Lunch at Makassutu Lodge, then continuation for the visit of the sacred crocodiles of Katchikali, the ethnographic museum, vision of the Ark 22 'is one of the biggest and most impressive building of the Gambia. The gate measures 35 m tall and two unknown soldiers, passage impossible to circumvent, given that Banjul is built on a peninsula. At its summit, one has a spectacular view over the city. Then dinner and overnight at the hotel.

Departure after breakfast transfer on Kaolack ferry crossing with police formalities, asking for a patience lunch pic nic. Dinner and overnight in Kaolack.

After breakfast we leave late for the island of Gorée, an island that witnesses an unprecedented human experience in the history of the peoples. Indeed, this "memory island" is for the universal conscience the symbol of the slave trade with its cortege of suffering, tears and death. Free lunch on the island, visit of the house of the slaves, its streets testifying a sad history of the African black people. Return to Dakar, visit the presidential palace, the Renaissance monument and dine in a typical restaurant and transfer to the airport