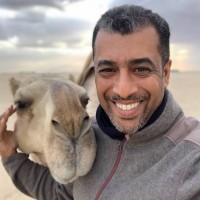 Kuwait, is a country located in the Arabian Peninsula, in the northwestern corner of the Arabian Gulf. The country is situated in a section of one of the least-hospitable, driest deserts on Earth. Its shore, however, hosts the Kuwait Bay, a deep port on the Arabian Gulf. Here, in the 18th century, Bedouins from the interior founded a trading post. With time and accumulated wealth, the small fort grew to become Kuwait City, a modern metropolis mingling apartment buildings, skyscrapers, and mosques.

Visit sights such as the Kuwait Towers, Al Mubarakiya Souq, Grand Mosque and Sadou House and hear tales about them that you might miss if alone. Complete your experience with dinner at your choice of the suggested local restaurants.

I can customize this tour based in your interest.