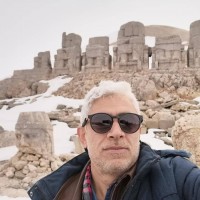 Nearly in the north of shelter,the structure carved into the main rock is 7 meters long.5 meters wide2.5 meters high and 35 square meters.on the eastern wall of the structure,there are columns carved into the main rock two large niches in the middle and two small niches in the middle on the both sides paint residues can be seen on the belt rising above the two columns around the big niche in the middle.probably on the aforesaid belt there were symbols belonging to mithras religion the plaque on which mithras sacrifing the bull scene was carved was also placed in the big niche in the middle the crown beam motif as one of the symbols of mithras is carved on the eastern wall in one of the small niches there is a rather smoothly carved water or blood bowl and a pool an he ground right in front of it the water or blood bowl and the pool area connected to each other with a channel through the wall and it is known that water or blood was used in the mithras religious ceremonies