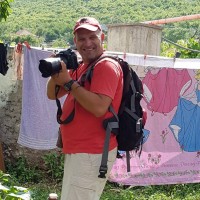 During this day trip we will visit Korca city considered the largest in the southeast of the country and a very important cultural center. Due to the French cultural influence during the ww1, it has been called often as "the little Paris". As the home of National Museum of Education and more museums, it offers a lot to the visitors. It's not known only for the history and the culture, but also for a diverse culinary which makes it a special destination.

Prespa lake is divided between the three countries. A local rumor says that always you have to carry a passport with you while you are swimming, you never know on which country shore you will be driven by the waves.