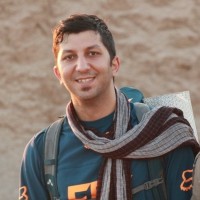 The name “Persepolis”is a Greek word for “the city of Persians”. It is located seventy miles northeast of Shiraz in Iran, which was built in terraces up from the river Pulwar to Kūh-e Raḥmat (“Mount of Mercy”). Persepolis, as the capital of the Persian Empire was founded by Darius I in 518 B.C., and then the construction of it, was continued by his Successors. It is a half artificial and half natural job of many architects, artists, master builders and too many other men and women who were insured as well as being paid by monthly salaries. Building of this masterpiece was lasted for about 120 years and by the exciting evidence from an unfinished palace we can say that it never got the chance to attain perfect. Persepolis was designed primarily to be a showplace and spectacular center for the receptions and festivals of the kings and their empire. It expanses for about125000 square feet. This magnificent masterpiece is a unique job which every year gathers too many tourists from all around the world just to see its Mysterious, extraordinary, elegant sights which contains of:

Official Palace and ceremonial palaces of Persepolis (Palace of the Gate of Nations).Living rooms and small private chambers.Treasury of the kingFortress and Protective CastleEntrance steps and Xerxes gate

Macedonian Alexander Gordian attacked Iran and set fire to Persepolis. But the ruins of this place are still known as one of the largest historical works all around the world as there are detailed pictures on the walls which is a true prodigity of the humans art and scince for its time.