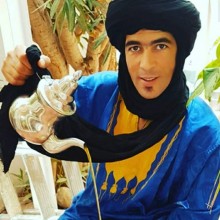 Abderrahmane Oukassi, a young native of the  mountains, experienced in tourism, who decided  to devote himself to instilling the love of an authentic and adventurous Moroccan experience, as he truly loves his country!

I am born in November 1986 as the third son of a traditional Berber family at a small village in the Dades Valley.

After 11 years of schooling, I followed in my father's footsteps, and helped building houses. I initially started in the villages of Dades and decided then to move to the city of Oujda, where I worked for some years as a constructor. Later – after getting my driver's license – I decided to learn to  drive a caterpillar, which was hard work, controlling huge machines.

To work in tourism, I needed to improve my French and had to learn English to be able to communicate with people from all over the world. I therefore started to work in a Kasbah hotel at the foot of the dunes of Erg Chebbi, doing a bit of everything.

After three years of education I moved over to Marrakech to work in some Riads for one more year. Then it was time to complete an examination to become a professional driver and to start working as a driver/guide for touristic private and group tours. 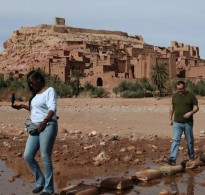