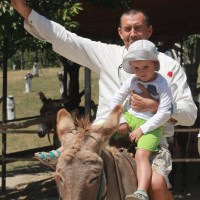 Jewish History Tours Around Ukraine. The Jewish community in Ukraine constitute the fifth biggest in the world

Please inquire for custom tour duration, and any number of people in the group.

In the Ukrainian People's Republic, Yiddish was a state language along with Ukrainian and Russian. At that time there was created the Jewish National Union and the community was granted an autonomous status. Yiddish was used on Ukrainian currency in 1917-1920. Before World War II, a little under one-third of Ukraine's urban population consisted of Jews who were the largest national minority in Ukraine. Ukrainian Jews are comprised by a number of ethnic groups, including Ashkenazi Jews, Mountain Jews, Bukharan Jews, Crimean Karaites, Krymchak Jews and Georgian Jews.

Ukraine was a settled land and a motherland for Jews from the antique and medieval times till nowadays. Jews lived practically around all the country. There are thousands of Jewish sites in Ukraine. Let us know the region / town of your interest, or your special interest and we will combine a customized route for you. The most famous Jewish culture towns are Odessa; Lviv and small towns of Galicia region; Chernivtsi (Bukovyna); Kherson (northern Black Sea Coast); Berdychiv, Vinnytsya, Khmelnytskyi, Zhmerynka (Podolian region); Zhytomyr; Uman' and others.

More regional details see on pictures in a photo album.