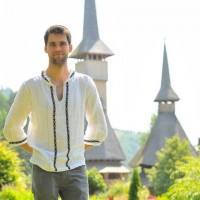 Half Day Tour of Bucharest by car: Old Town and 2 Museums

Discover the most emblematic places of the Romanian capital, on a private tour of Bucharest with an English guide!

The Palace of the Parliament, the Revolution Square, the House of the Press ... Learn more about the history of Romania on this tour of the most representative places of the Middle Ages, Monarchy, Communism and Democracy in Bucharest.

After having made the pick up service at the hotel, we inaugurate our private tour of Bucharest with a visit to one of the most emblematic buildings of the city: the Village Museum. Did you know that the houses that compose it were dismantled in the region of origin to be then reassembled inside the museum?

After the visit of the museum, we head towards Revolution Square to see the balcony from which the dictator Nicolae Ceaușescu looked out to speak to the people. Did you know that this emblematic square was the backdrop to the outbreak of the 1989 Revolution? Once here, we will have the opportunity to observe other points of interest in the capital, including the Royal Palace, the Romanian University and the Central University Library.

You will then continue in the direction of Calea Victoriei, one of the most famous avenues of the Romanian capital. Here, we will be surprised by the mixture of architectural elements that characterize it, by the exclusive shops and luxury hotels that populate it.

You will then visit the Palace of Vlad the Impaler, the summer residence of the Romanian ruler also known by the name of Dracula. Here, I will tell you interesting facts about this legendary Rumanian ruler and we will discover the factors that led Bucharest to become the capital of the country.

We will reach the last stop on the itinerary: the Patriarchal Cathedral, characterized by a unique architectural style and splendid frescoes typical of Byzantine churches. Built in the 17th century, the cathedral enjoys a privileged position, which will allow us to contemplate the Romanian capital in all its splendor. A breathtaking landscape!