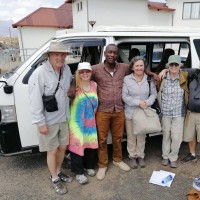 Samburu National Reserve is a Kenyan less visited Game Reserve and is situated within the Rift Valley. The Reserve Measures approximately 104sq. Km (approx. 65sq. miles) in size, this fenced Savannah grassland is roughly 350km (217 miles) from Nairobi. It is relatively small in size compared to other Kenyan parks, such as Tsavo but it has more to offer as well as several endangered species.

Pick up at 0630am after early breakfast from your hotel or guest house, drive to the rich agricultural area of Mount Kenya region via the famous Pineapple company Delmonte, you will also have an opportunity to cross the equator just before you arrive at famous Nanyuki Town.

The journey will continue through Isiolo only to arrive at the lodge in good time for lunch at the Samburu Sopa Lodge. After lunch transverse the Samburu game reserve in rare species of wild life that are found on the northern hemisphere of the country. The game drive here will take you very close to the elephant bedroom tower. The game drive will run for about 3 hours and there after you will return to the Lodge for dinner and overnight stay.

Further exploration of this fascinating reserve awaits you. Early morning and afternoon game drives give a chance to travel over some of the world's most spectacular and exciting terrain. You will have morning and evening game drives.

After breakfast we head north to Mount Kenya region. On your way stop at the equator and have special demonstration. Arrive in time for lunch. After lunch visit The Mau Mau Caves at the foothills of Mt Kenya open out to a beautiful waterfall and pass-through rocks on Burguret River. Once shielded by a dense forest cover, these caves near Nanyuki are well known for their historical significance.

During the Emergency period between 1952 and 1960, the Mau Mau Freedom fighters used these caves for storing supplies and as a hideout from colonial forces.

The 9km hike from Bantu Lodge goes over a dirt road through the forest on the foothills of Mt Kenya. The forest cover in this area is sadly sparse due to over-exploitation. However, it still provides a pleasant walk through wild bushes and relatively short indigenous trees teeming with baboons, birds among other wildlife. Footprints and animal droppings attest to the presence of hyenas, elephants, buffalos and other wildlife in this forest.

When you get to the caves, a swaying footbridge over the river takes you to the shallow cave, mostly made up of a large rock overhanging a large sheltered space. Directly across the caves is the pass through rocks on the river, with the cascading waterfalls directly behind. A short climb to the side takes you to the top of the waterfalls, with magnificent views of rapids preceding the waterfall.

Morning drive south towards Lake Nakuru National Park. Lunch at Nakuru before proceeding for an afternoon game drive in the Park. This is a shallow soda lake which inhabits more than a million flamingoes. The Lake Nakuru National Park also has a Rhino sanctuary. Other animals to be seen here are lion, buffalo, waterbuck, warthog and hippo. Dinner and overnight at your preferred at the Park. Dinner and overnight at Lake Nakuru Merika hotel

After breakfast leave for Masai Mara Game Reserve, arriving in time for lunch. After lunch proceed for an afternoon game drive in the game reserve which is Kenya's finest wildlife sanctuary. Including migrants, well over 450 species of animals have been recorded here. Although July, August and September are the months when the Mara plains are filled with migrating wildebeest and zebra, there is also resident wildlife year round. The famous Maasai tribesmen live within the dispersal area of the game reserve. Dinner and overnight at Mara

Our morning and afternoon (full day) game drives take us in search of Africa's Big Five and the plethora of other wildlife inhabiting this vast Kenyan game reserve. On clear days, the Mara offers fantastic orange-tinged sunsets that make for spectacular photos.

Many a number of game are coming at your door step when you in the park leaving you with only option of counting your blessings that nature holds for you as you view them in their natural habitat.

The Mara Reserve covers 1510km² of incredible wide-open landscapes and fertile riverine woodlands, following the looping meanders of the Mara and Talek rivers in southwest Kenya. One glimpse is enough to explain its appeal; it is typical open Savannah, with a mass of amazing wildlife. Wherever you go in the vast Masai Mara Park you will see a frequent amount of wildlife such as Masai giraffe, baboons, warthogs, bat eared foxes, grey jackals, spotted hyena, topi, impala, hartebeests, wildebeest. Elephants, buffalos, zebras and hippos are also found in great numbers. It is also common to see lions either basking after a heavy meal, or surveying the plains for their next meal. Cheetahs and leopards are harder to spot, but reasonably common.

The ultimate action here is without a doubt the annual wildebeest exodus, the Great Migration, in July and August when millions of these grazers move north from the Serengeti in search of lusher grass before turning south again in October for the new life circle to begin after a life threatening move across the strong jaws of East Africa crocodile found within the Mara River and Talek river.

We overnight at the same tented lodge in a natural setting in Masai Mara on both nights.

• Meals & drinks: All meals included plus drinking water (Other drinks not included)

Wake up call at 0600am, have a cup of hot coffee or African tea, proceed for early morning game drive, the early morning Game safari offers you golden opportunity for to sight the big five, namely buffalo, rhino, elephant, lion and leopard among other wildlife species. The game viewing takes about 2-3 hours then return to the camp for full breakfast.

After breakfast check out and proceed back to Nairobi with a stopover in Narok Town for Hot Lunch. Arrive in Nairobi in the early afternoon with time enough to do some shopping for souvenirs in the Capital. In the early evening head for the famous Carnivore Restaurant known for its wide variety of meat including giraffe, crocodile, ostrich, antelope and zebra; afterwards drop-off at the Jomo Kenyatta International Airport for your flight back home.

• Meals and drinks: Breakfast in the Masai, Lunch en-route in Narok while Complimentary Dinner is taken at the Carnivore Restaurant including drinking water (Other drinks not included)

Price for this package is $ 2140 per person sharing based on minimum 2 people.

Meals as per itinerary B=Breakfast, L=Lunch and D=Dinner.

Services of an English speaking driver/guide

Excursions and activities as per itinerary

Recommended Mineral Water while on safari

Drinks, tips, laundry, telephone calls and other items of a personal nature International flights plus Optional excursions and activities not listed in the itinerary like Balloon safaris, Masai Village and short Nairobi excursions.