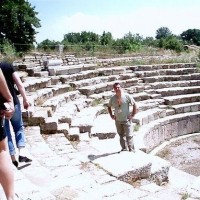 Halicarnassus' history was special on two interlinked issues. Halicarnassus retained a monarchical system of government at a time when most other Greek city states had long since rid themselves of their kings. And secondly, while their Ionian neighbours rebelled against Persian rule, Halicarnassus remained loyal to the Persians and formed part of the Persian Empire until Alexander the Great captured it at the siege of Halicarnassus in 334 BC.

Halicarnassus originally occupied only a small island near to the shore called Zephyria, which was the original name of the settlement and the present site of the great Castle of St. Peter built by the Knights of Rhodes in 1404. However, in the course of time, the island united with the mainland, and the city was extended to incorporate Salmacis, an older town of the Leleges and Carians[1] and site of the later citadel