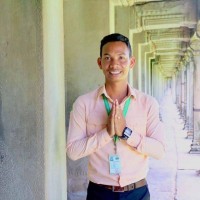 Mean Young
Other tours by this tour guide

Your day starts at 8:00 AM to visit South Gate of Angkor Thom, one of the 12th-century capital city and the last city of Khmer Empire, which was built by the Buddhist King Jayavarman VII. You will see the two rows of holding snake statues, the view of the beautiful moat and the huge four faces of the tower of the gate. After walking a bit around, our tour guide will take you to see Bayon temple, the temple with hundreds of smiling faces. Beside Bayon temple, our tour guide will find a suitable place for you to have your lunch in Angkor Park.

Ta Prohm, which is the Tomb Raider movie, was filmed. The last temple before sunset is Angkor Wat temple, the seven wonders of the world is going to be the next destination. After we have finished visiting the largest Hindu monument in the world (Angkor Wat Temple), we would like to take you to see the Sunset on the top of Bakheng Mountain, the capital City of Khmer Empire in the 9th century.

Continue our journey at 8: 30 am to visit five more temples in the Big circuit such as; Preah Khan Temple was served as the king’s father temple, Neak Poan (one of 102 hospitals of the King Jayavarman VII at the end of the 12th century), Ta Som (the small scale temple with the same style to Ta Prohm temple), East Mebon, the brick temple served as the ancestor temple, and Pre Rup (Turning Body temple).

Your day starts at 9:00 AM, transfer by car or minivan to see the garden temple of Beng Mealea or Jungle Temple, is about 60 kilometers from Siem Reap town. It is a huge temple, unrestored temple surrounded and partly overgrown by jungle near Phnom Kulen National Park. The temple was built out of large sandstone blocks adorned with both Hindu and Buddhist depictions, is faced towards the east. You should not miss the visit of this one because of 100 percent of this time no restoration).