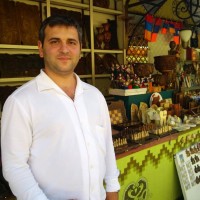 I offer you an amazing tour of the cultural attractions of Yerevan in a new and comfortable Mercedes-benz car and exclusive services in Armenia.

Matenadaran was built in 1920 and is one of the repositories of ancient manuscripts in the world (more than 17 thousand). Matenadaran located in the end of M. Mashtots street (main street of the Yerevan). Monuments of Mesrop Mashtots and other great Armenian historians and philosophers were erected in this part of the building. Inside, you will see a magnificent museum with a huge amount of ancient documents about a wide variety of countries.

St. Gregory Church was built in 2001 in honor of the 1700th anniversary of the adoption of Christianity in Armenia and is the largest cathedral in Yerevan and in Armenia. Inside you will see a huge hall for services, as well as the delicate architecture of Armenian architects. The Church is located in front of the shopping center Russia, on Tigran Mets Street.

The great fortress of Erebuni was built by the Urartian king Argishti the First in 782 BC and became the first architectural monument from which the construction of the capital Yerevan began. An archaeological find was made during the Soviet Union and it became a fact that Yerevan is older than Rome. A museum is located right in front of the steps of the entrance, with ancient relics and cuneiform writing of the ancient Urartian kingdom, and the ruins of the historic city rise on the top of the hill. According to Forbes magazine, it is one of the nine oldest fortresses in the world, which everyone should to visit.