Millau is a city in France with deep cultural and historical traditions. From the very first moment you enter this region, you will notice a classic beauty that overwhelms the senses and can awaken your interest in exploring every corner of it.

The commune of Millau is located in the south of France in the Midi-Pyrenees region, in the department of Aveyron, and it is surrounded by plateaus (spits) of calcareous origin and alluvial soils, which are irrigated by the rivers Tarn and Dourbie. 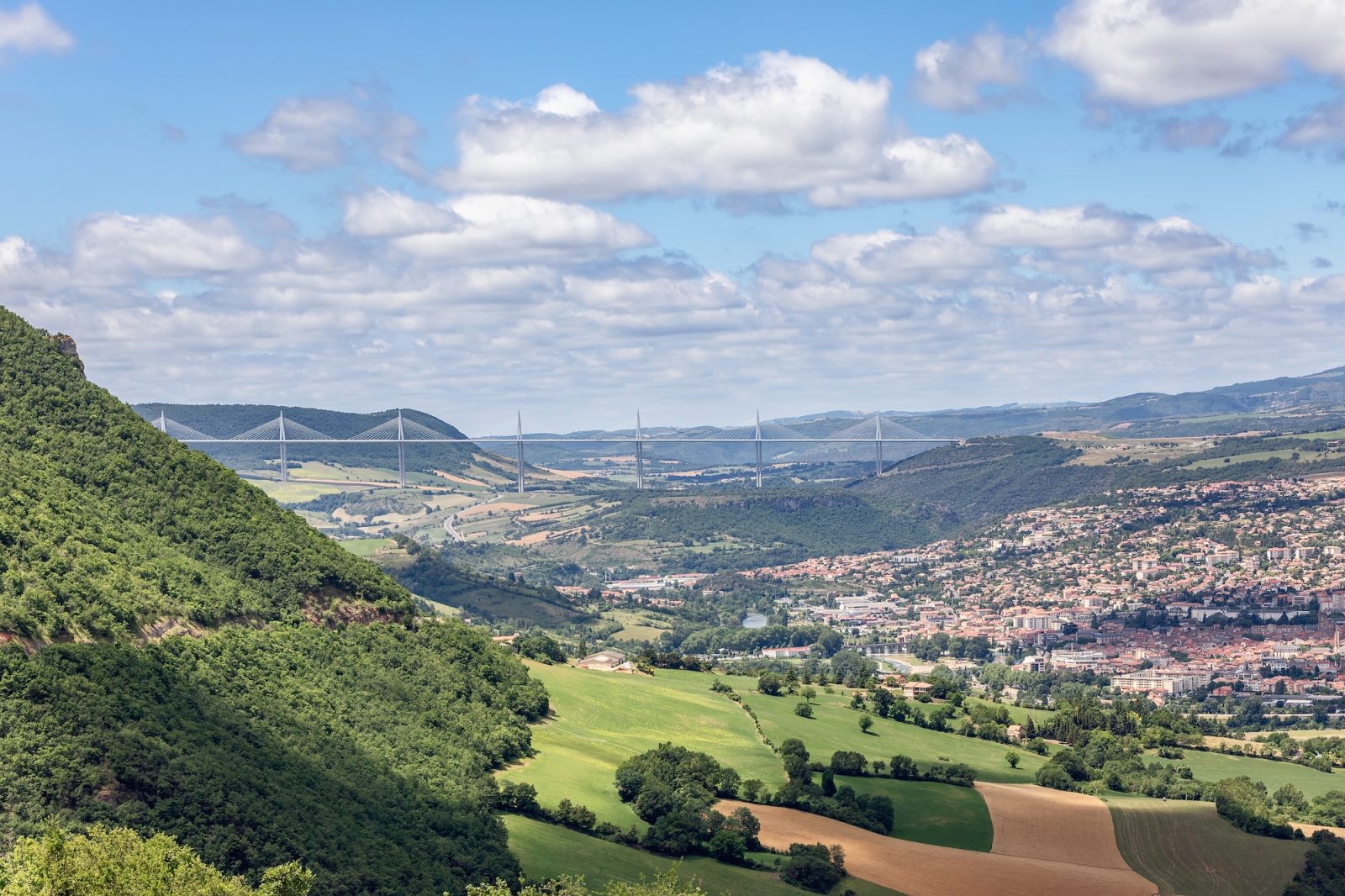 Millau is a destination in France that offers tourists natural attractions, and you can enjoy them in the most convenient way for you. If you are looking for adventure, then you have options such as kayaking, paragliding (extreme sport), quad biking, and hiking. Or you have the opportunity to visit the ancient center of ceramic production, get to know the city of insects "Micropolis", explore the caves where the Roquefort cheese is kept, or just walk through the botanical garden of Kos. And private tour guides who live in the neighboring cities of Millau will help you organize any of these activities in the best possible way. In 2 clicks on our website, you can find a personal guide who will arrange for you an individual tour of the Millau Viaduct and show you its unique construction up close, as well as tell you how this miracle of technological thought was built and how important it was for the ecology of the region as a whole.

Now Millau is a small town in the heart of France, which has preserved the magical spirit of the Middle Ages and even antiquity since it was founded in the 3rd century BC (!!!). Once it was famous throughout the Roman Empire as a center for the production of ceramics. The center of Millau is truly a medieval city with buildings constructed 5-7 centuries ago. All the most important architectural sights of the city of Millau are located within its historical center, so 2 hours will be enough to see it all! 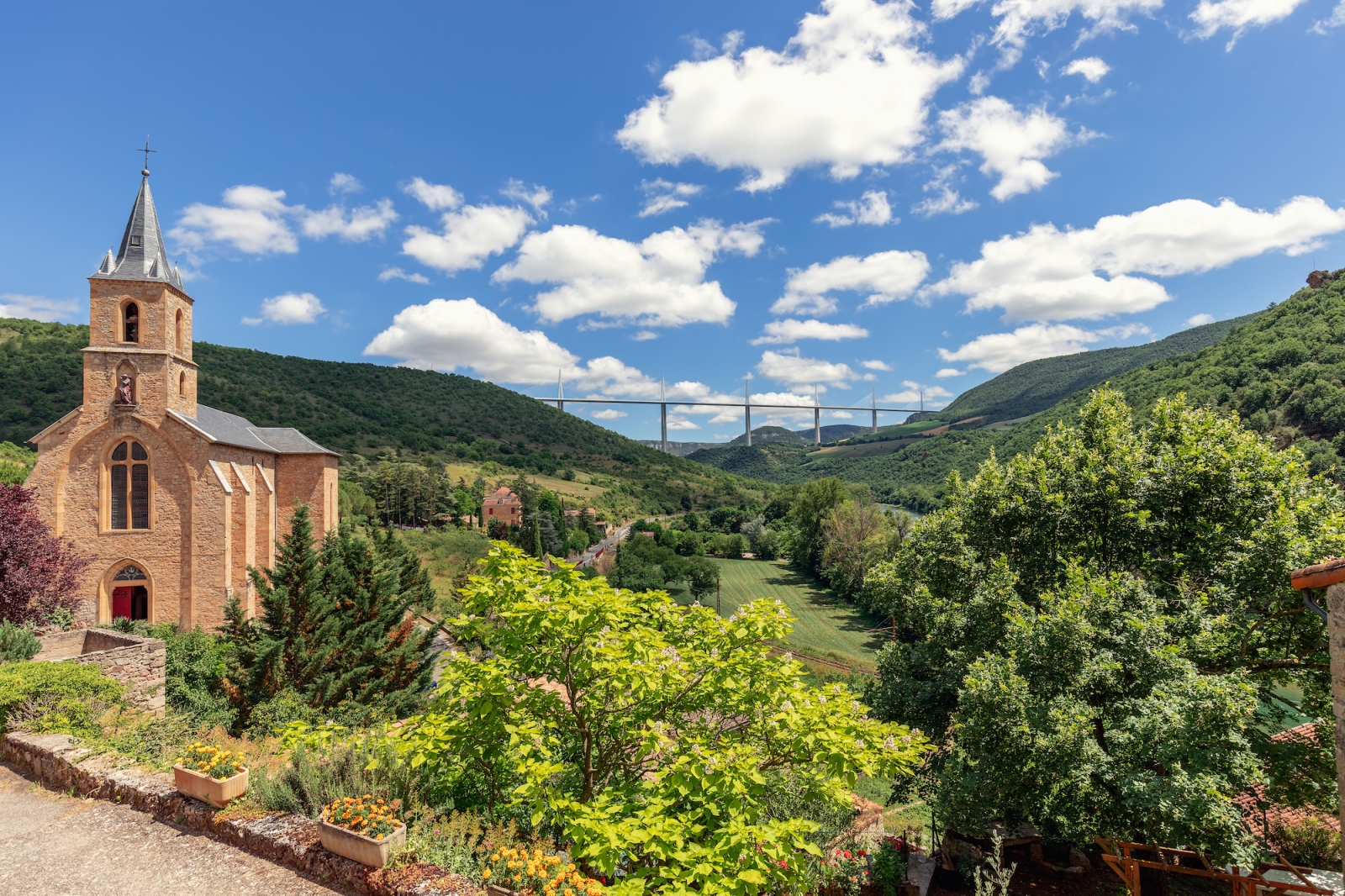 In addition to all these attractions, many tourists travel to this city just to see its famous landmark with magnificent architecture - the Millau Viaduct.

How to observe Millau Bridge? 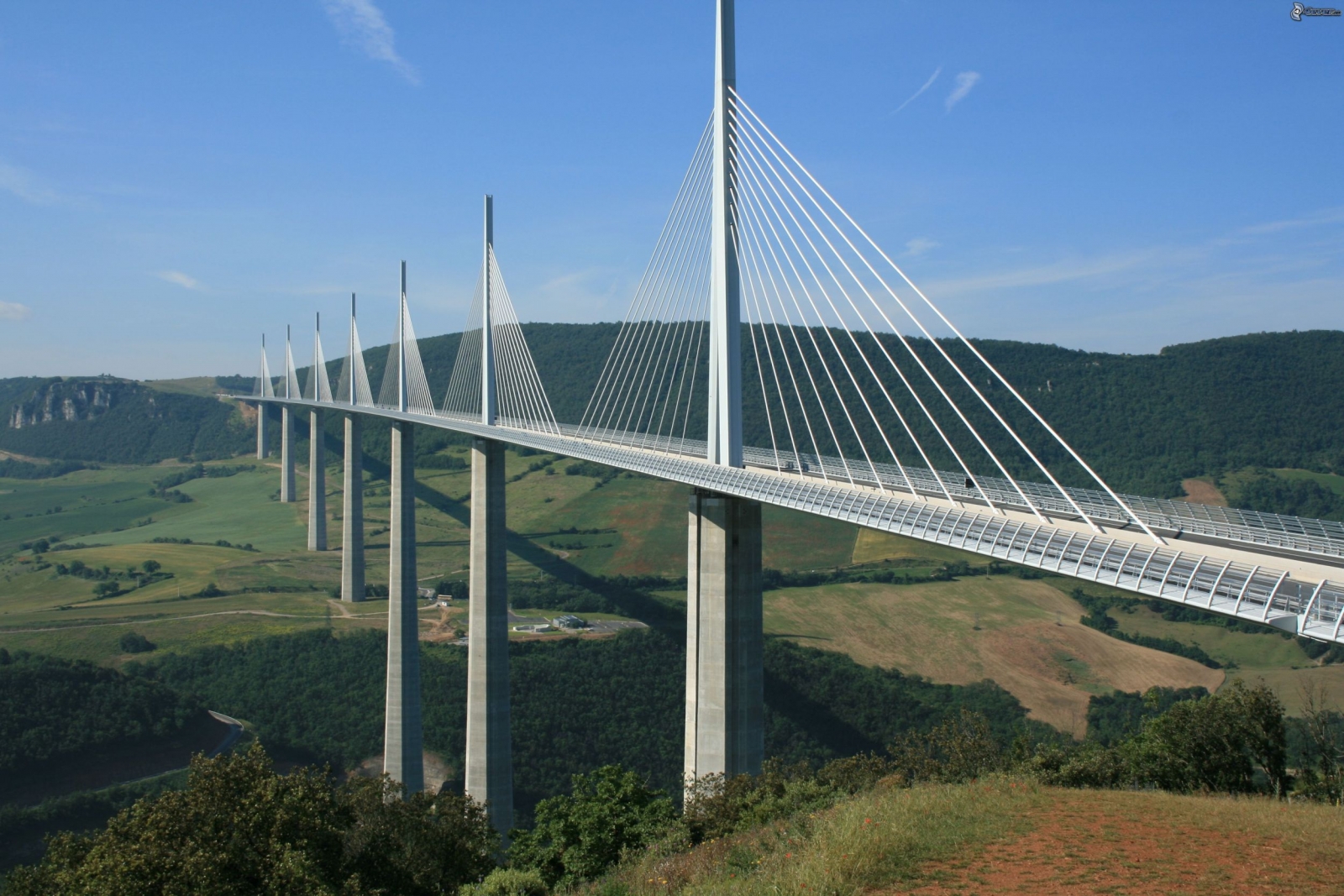 You may find it a little strange to plan a tourist trip to the French city of Millau just to see the viaduct. In order to dispel any doubts and convince you that the Millau Bridge is worth a visit, we look at what makes it so special.

The viaduct project came about as a solution to alleviate traffic congestion along the streets of Millau caused by the large number of holidaymakers traveling from Paris to the southern coast of France to enjoy the Mediterranean year after year. In such summer seasons, kilometer traffic jams and many hours of exhausting waiting on the A75 highway to cross the city of Millau increased more and more, which lost all meaning of this expressway, which was also free for almost 340 km! Imagine what the environment was like on the highway passing through residential areas! 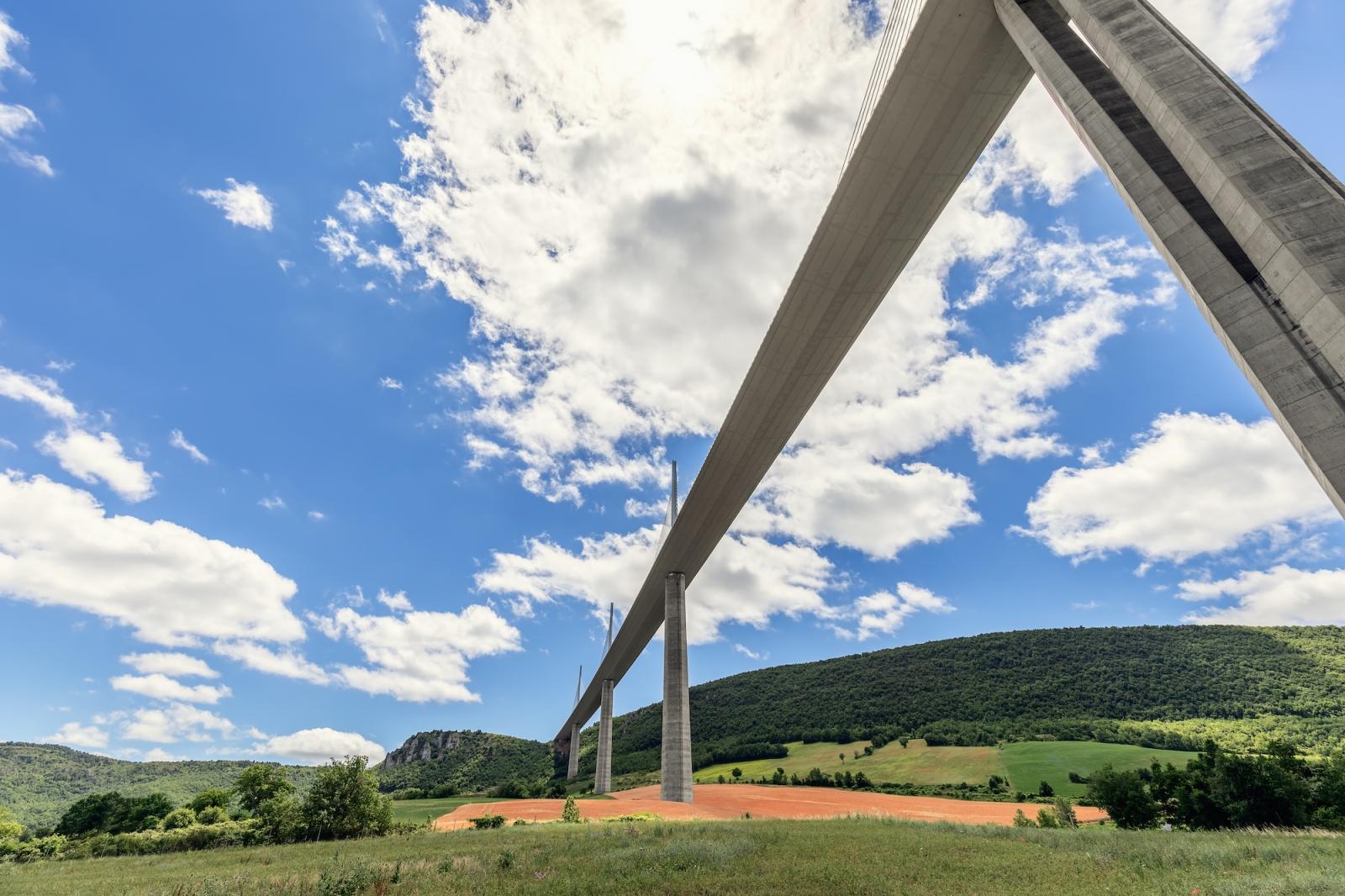 The A75 highway connects the cities of Clermont-Ferrand and Montpellier, and is one of the busiest sections of the route, passing from the more northern cities of France, such as Lyon, Dijon, Paris, Limoges, Bourges, Orleans, Vichy to the resort towns on the Côte d'Azur - Montpellier, Marseille, Aix-en-Provence, Avignon, Nimes, Narbonne and on to Cannes, Nice, Monaco, and Barcelona in Spain.

In the face of this task, it was necessary to combine efforts and strict design, 13 years of which took calculations and 3 years of construction itself, this viaduct was erected, and it connects the cities of Clermont-Ferrand, Beziers, and Narbonne, although located not far from each other, if you look at the map of France, because of the unevenness of the terrain, getting from one to the other was an eternity!

The construction of any viaduct has its own difficulties. The Millau Viaduct took them to a new level, presenting a challenge to design and architecture due to the geography of the location with rocky cliffs, swamps, and strong winds that can reach 200 km/h. Moreover, it was necessary to design structures that could withstand the influence of the Tarn River at the bottom of the valley.

The French engineer Michel Virlojo and the English architect Lord Norman Foster managed to fit the Millau Viaduct into the surrounding nature as much as possible, thereby emphasizing the beauty of the whole place.

You can visit the Millau Bridge on your own. But a tour with a personal guide is the best option. A private tour guide will help you with more than just the viaduct. So that you can immerse yourself in the details of the city of Millau or any of the neighboring equally interesting and ancient cities, a personal tour guide will offer you to participate in the journey with the best conditions and comfort.

What makes the Millau Viaduct outstanding?

When you first see the Millau Viaduct, you get the feeling that it is suspended in the air, it seems to be floating in the air, its white roadbed is supported by 7 colossal concrete columns with shrouds (supporting cables) on each side, which give the impression of a ship's sails, which fascinates with its beauty the entire valley of the Tarn River. 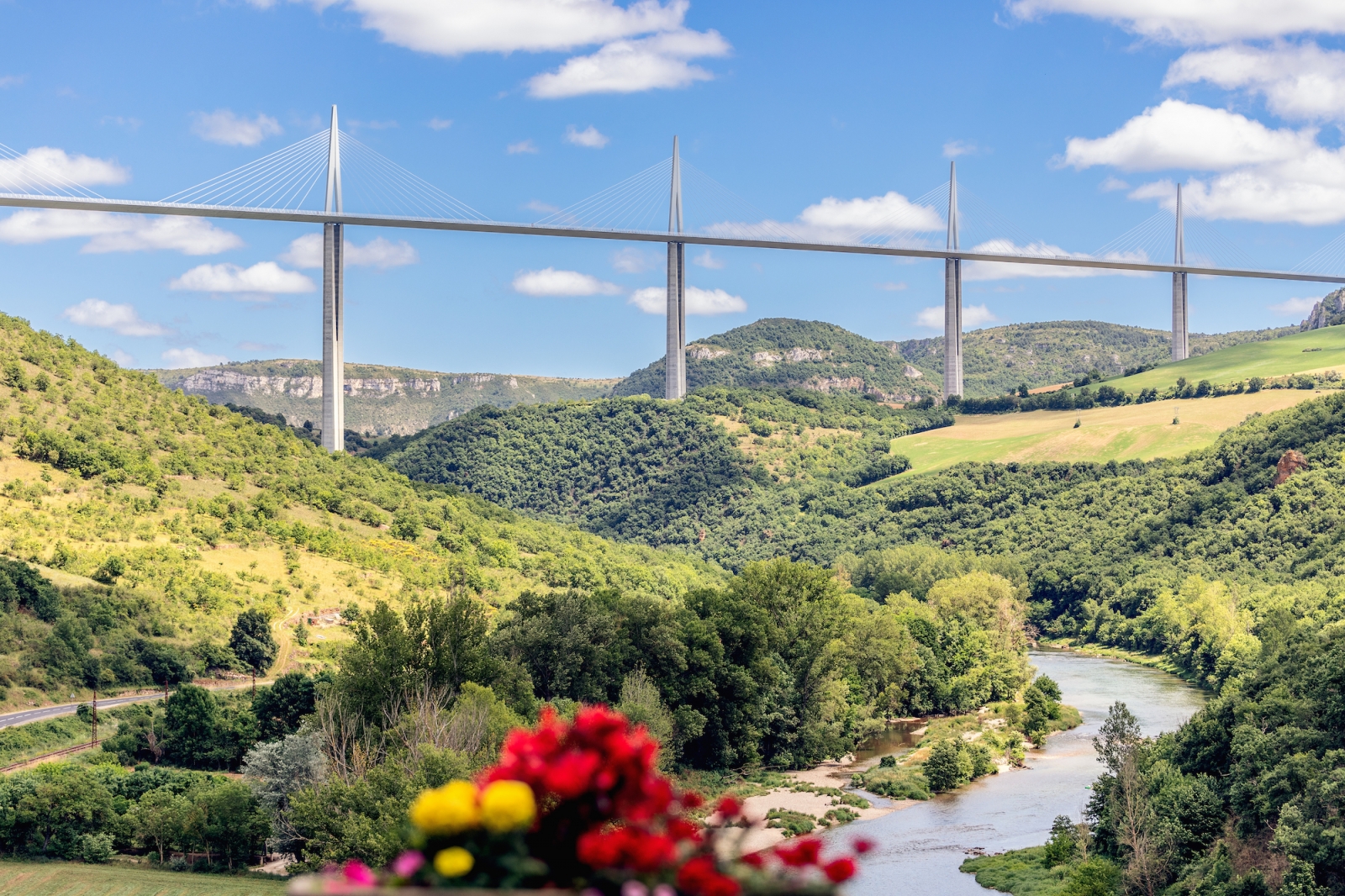 In terms of numbers, the design has several records that distinguish it from others. It has a maximum height of 343 meters, which is higher than the Eiffel Tower (a record) in Paris, and a total length of 2460 meters (a record). These dimensions have not been surpassed by any other cable-stayed bridge to this day, since it was opened on December 14, 2004. The viaduct is slightly taller than the Eiffel Tower in Paris, France, and only 40 meters lower than the Empire State Building in New York City, USA. 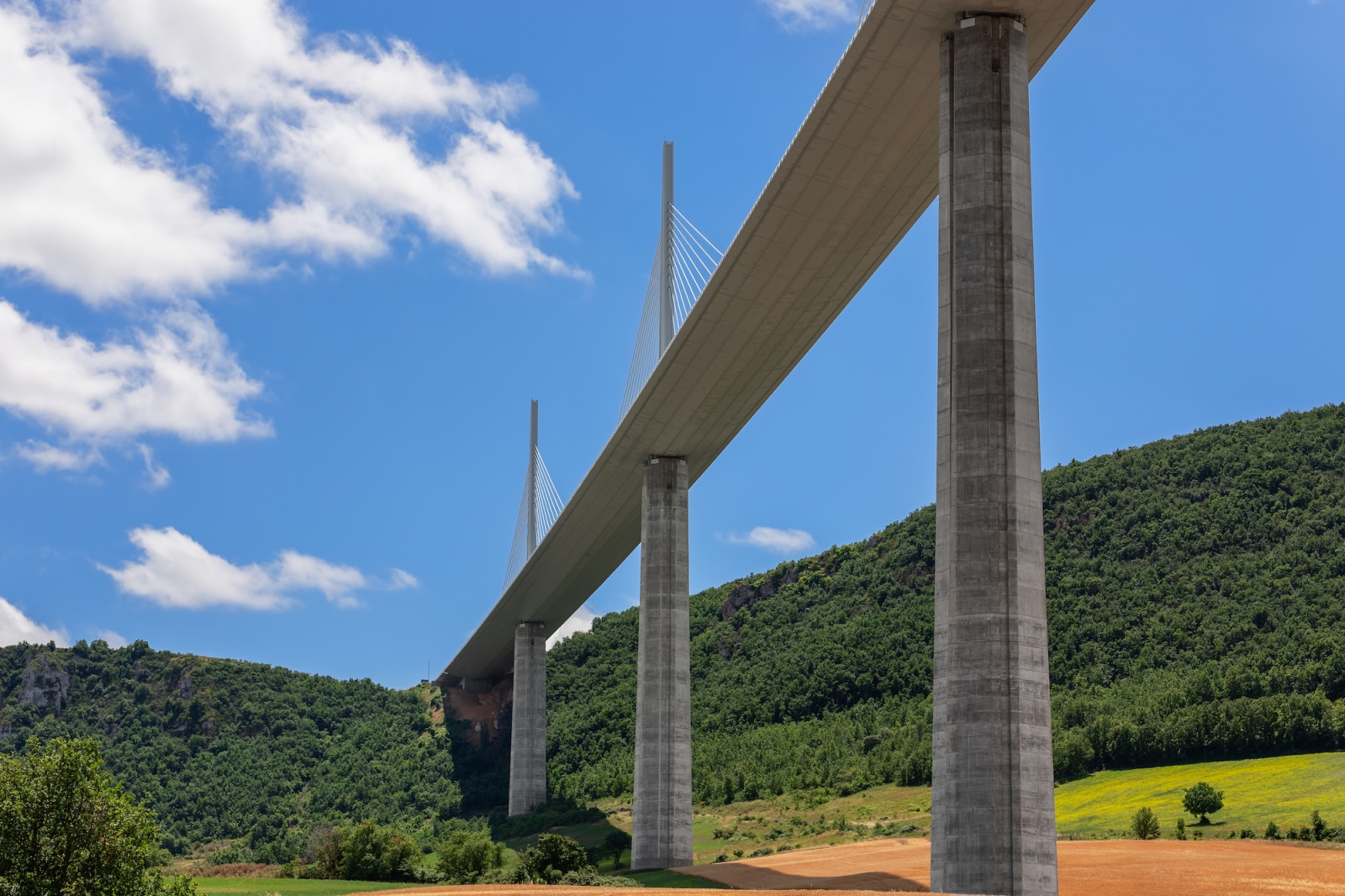 The Viaduct has received two world-renowned awards, the Environment Design and Architecture Award 2005 and the Outstanding Structure Award (IABSE), which recognize the Millau Viaduct as a work of outstanding value, developed using innovative processes and techniques that are guaranteed to be used in many other developments.

The majesty of the beauty of the viaduct and its relationship with the city of Millau makes it possible to see the Millau viaduct from any distance when it connects the widest edges of the Tarn valley.

Another way to get to know it is to cross the viaduct across the 32m wide highway which has two lanes in each direction. However, this is the place from where you will be able to know its grandeur and complexity to a lesser extent, compared to the option of being above the structure itself. 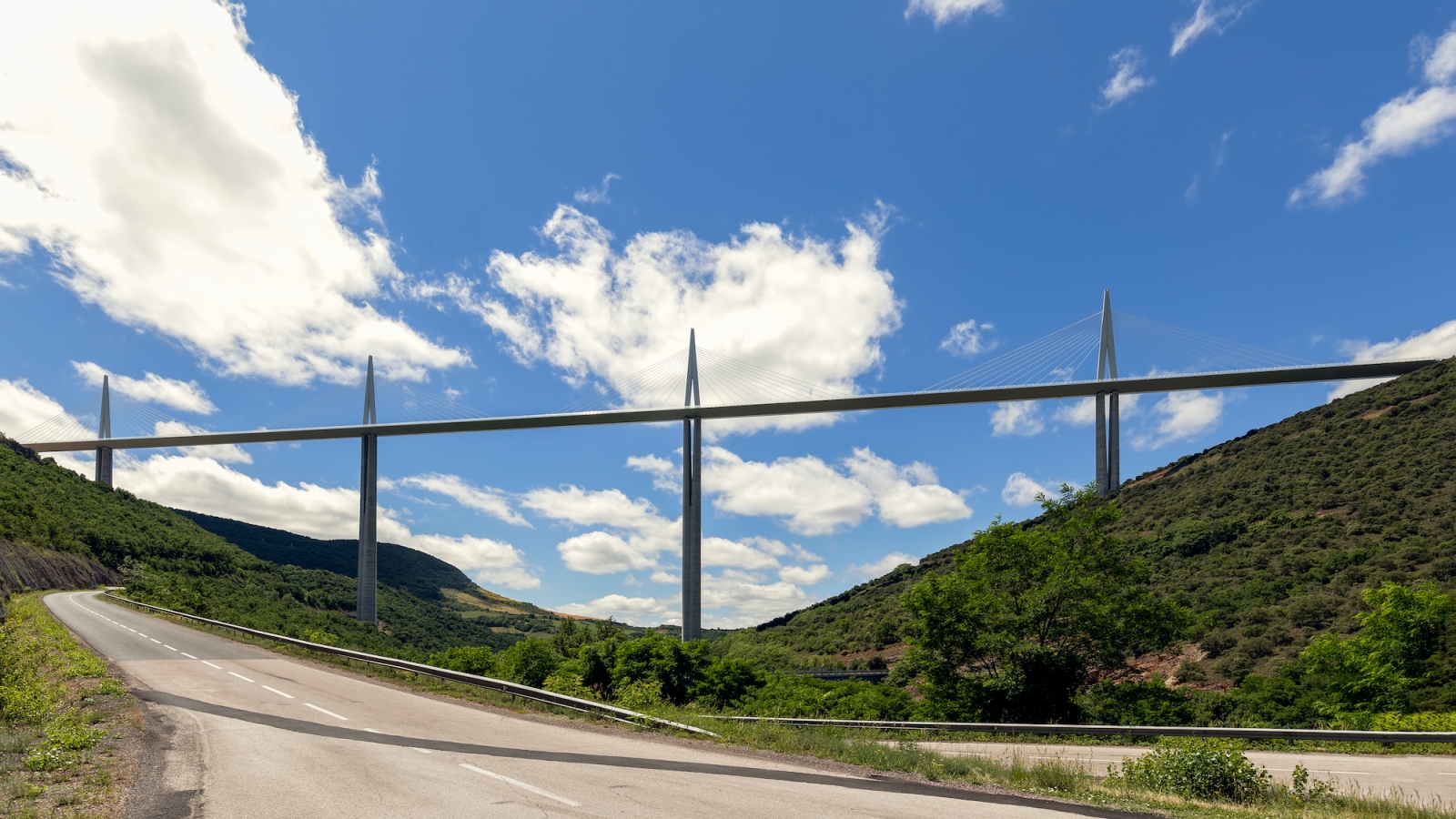 The Aire du Viaduc observation deck is an option that offers you panoramic views for incredible shots from different angles. It is fully prepared for you to enjoy the grandeur of the project with all the comforts.

As you gain confidence, you can descend into the viaduct valley and reach the Espace viaduct Info stand. Here you will see an exhibition that provides detailed information on the viaduct. This place is a must-see and everything is ready to show you how it was built, what obstacles the engineers, architects, and workers had to face, and what materials were used in the construction.

For those who need an adrenaline rush in their daily lives, they can walk to a track specially designed for quad biking, walking, or guided walking private tours and walk under the Millau Viaduct.

One of the breathtaking possibilities is to take advantage of the services of the boatmen of the Millau Viaduct (les bateliers du viaduct). The idea is to be able to enjoy the whole structure from below while sailing along the Tarn River without losing the opportunity to see the flora and fauna of this place. 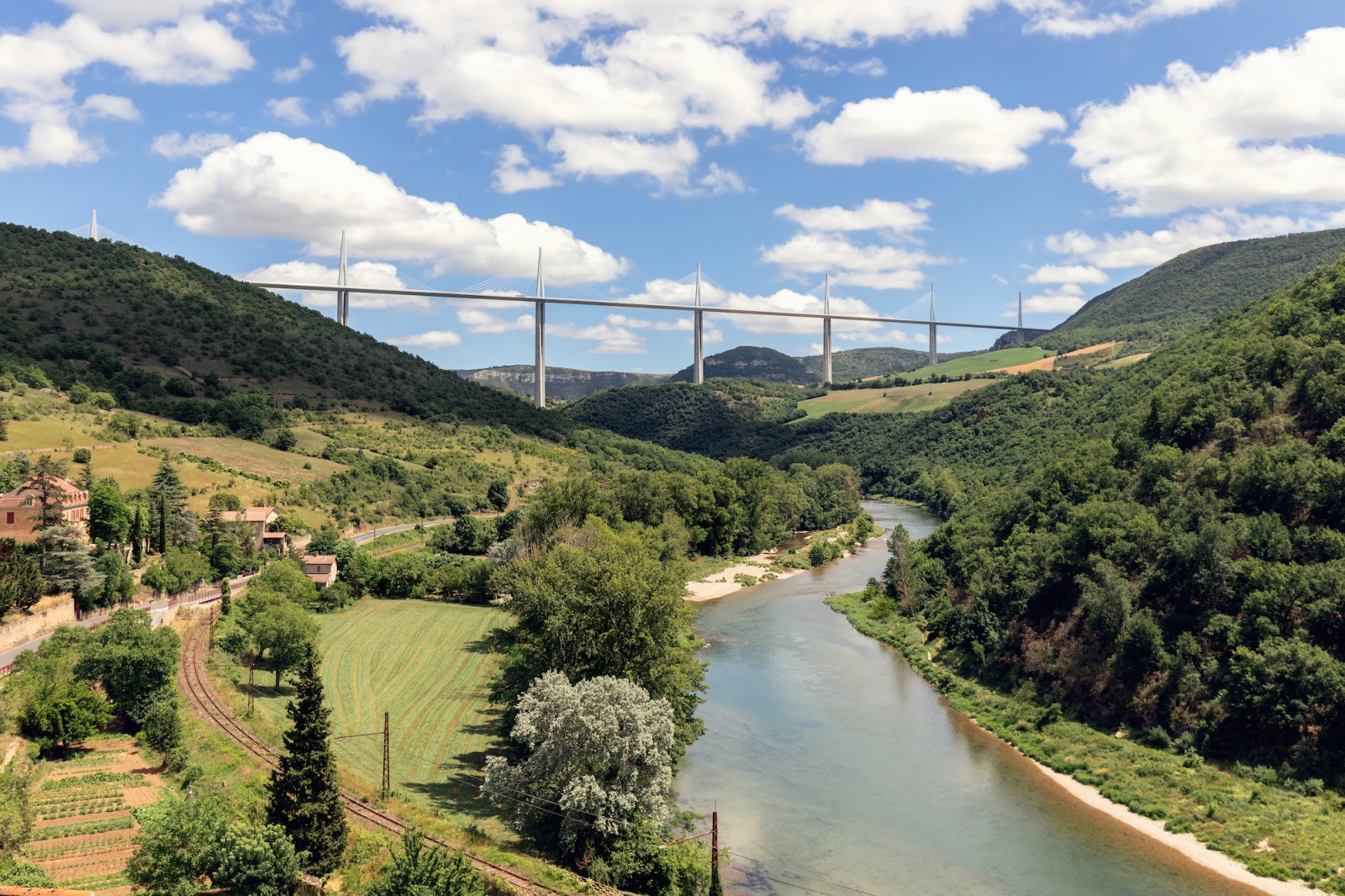 But if you still lack something, then you can go to the historical production of leather gloves in Millau, which is world famous. Or enjoy the cuisine by tasting the famous Roquefort cheese, aged in the caves of the village that bears the same name.

For you to get the best experience, there is an item that you have not considered so far. If you are going to use the services of a local individual tourist guide, then there are quite profitable options. For example, if you want to travel by boat or quad bike, then you can hire a personal tour guide for a specific time, half a day, a whole day, or several days at once. This option will give you the opportunity to learn more about the Millau Viaduct and be in the reliable company of a private tour guide who, in addition to his native French, speaks several other languages - yours will surely be among them!

Does the Millau Viaduct seem interesting to you? Will you include it in your travel itinerary? This place is truly unique because the pillars of the highest pylons of the Millau Viaduct are based on the bottom of a very deep gorge, and this makes the viaduct the highest of all transport structures in the world in terms of constructivism.

Well then, for dessert, we have a couple of friendly tips for how else you can entertain yourself in the vicinity of the viaduct: 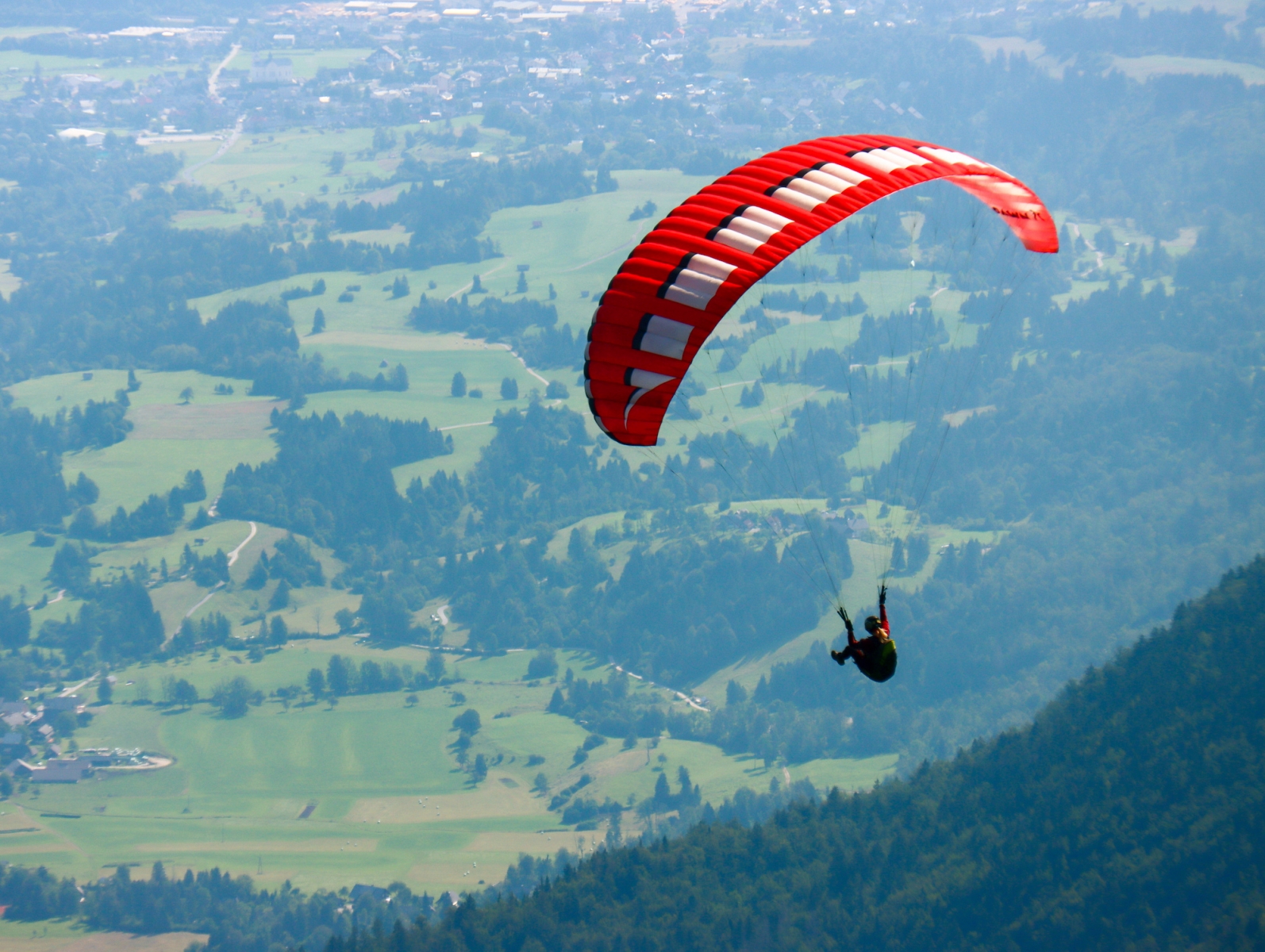