The Wonders Of Alexandria

The City of Alexandria is the home to one of the Seven Wonders of the World. But that’s not all. Founded by Alexander the Great and ruled by Queen Cleopatra, Alexandria’s history since its birth is full of famous men and women.

Besides the Pharos Lighthouse, the city is home to the Great Library of Alexandria and contains some of the most ancient architecture and places that are a must-see for every tourist who wishes to see the City of Alexandria within and out.

As it is the second largest city in Egypt, it is very easy to get lost in the streets of Alexandria. If you are traveling alone or are traveling for the first time, it is advised that you hire a private tour guide in Alexandria as they can take you to the desired places without any difficulty.

Following is a list of some of the must-see places in the Great City of Alexandria.

Located in the district of Cormous, the Catacombs of Kom el-Shuaqqafa date as far back as the 2nd century AD. The Catacombs are the perfect fusion of Greek, Roman, Egyptian and Alexandrian styles. The Catacombs are laid out over many different levels of tomb chambers and are hewn from the slope of the hill. 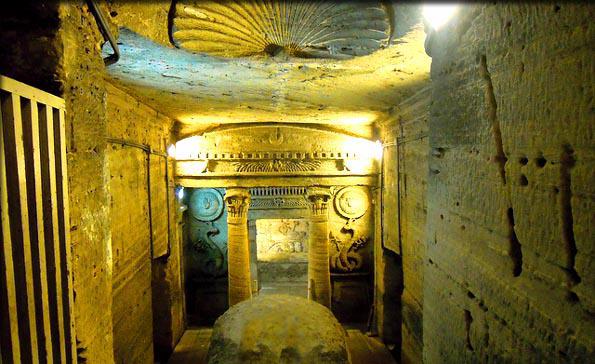 A staircase leads down to the main building which has a pathway to the Chapel that contains many tombs in its burial chambers. Each of these tombs can house three to four mummies. On the left-hand side of the building, you enter the Triclinium Funebre, which is a great hall that was used for banquets.

The main market of Alexandria is located in the Midan Tahrir in the central city. Everything is available there. From food to jewelry to clothes, everything is sold here. The Souk is not an attractive spot for tourists but a market for everyday vendors and buyers, but many tourists visit the Souk for a chance to experience the quintessence of the Alexandrian lifestyle.

The Souk is a combination of lanes, alleys, and streets that mesh into one another with each portion dedicated to a certain type of product. If you want to experience Alexandria as a local, then don’t miss your chance to visit the main Souk. 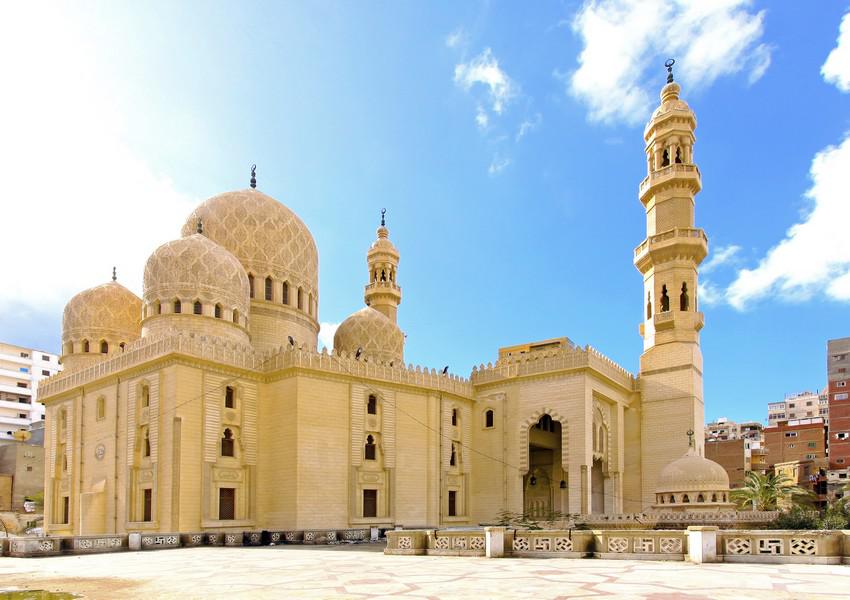 Built-in 1796, the mosque serves both religious and travel purposes. Many people visit it for religious reasons and to find peace while others visit it just to look at the calligraphy and intricate mosaic art that is strewn all over the walls.

Located at Muhammad Karim Street, anyone who wishes to visit the Mosque should dress properly and take off their shoes.

In 1947, Yousri Street was being cleared up to make way for a new housing scheme. It was then that Kom El-Dikka was discovered. Not only was it a great excavation site but it contained many ancient artifacts and architectures including a small Roman Theater, a Ptolemaic Temple, and mosaic tiles of rich Roman era houses. Thousands of tourists go to the “Mound of Rubble" to visit the lost Roman ancient ruins. 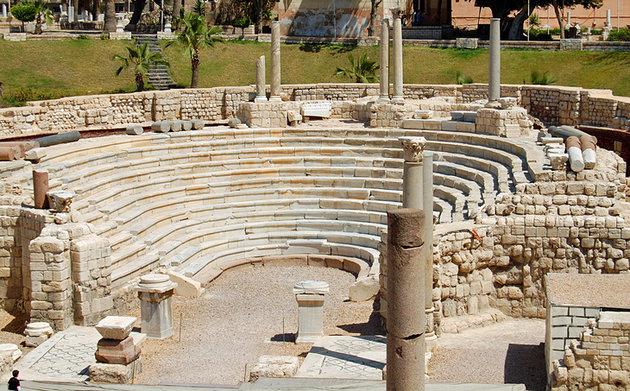 The Ras el-Tin Palace was once considered a summer home for the sultans of Egypt when the desert heat reached an all-time high. The Palace is used by the Egyptian Navy today, so, tourists cannot go inside the Palace. However, it is quite easy to look at the elegantly preserved Palace from the harbor waters.

This palace is also the last king of Egypt who relinquished his rule in 1952 and sailed into exile toward Italy.

Not a lot has survived of the once grand city of Alexandria located near the Eastern Harbor, but jump underwater and you find a lot more of the ancient Alexandrian ruins that made the ancient city great. The site, though only open for archeologists, in the beginning, is now open to tourists and local divers now that all the artifacts and treasures have now been removed and are on display in Alexandria’s museums.

The most popular site, named Cleopatra's Palace was a palace back in the day, but it is still not proven if the Queen actually lived there or not. All the statues and columns and sphinxes are still preserved underwater which makes it a great spot for people to visit. The underwater experience is great.

Located on Corniche’s Eastern edge, Montazah Gardens is full of tall palm trees, lawns, and flowers. The Gardens were once exclusively open for the royal court but is now open for all to visit. 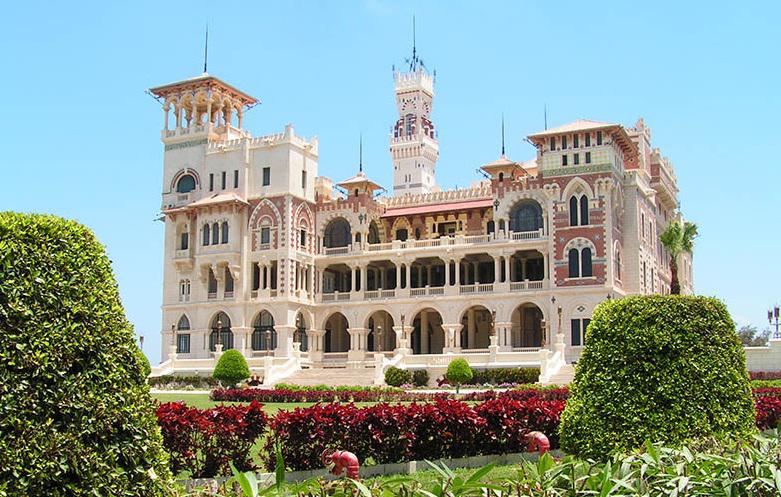 The Montazah Palace replaced Ras el-Tin Palace as the summer escape for the royal family. The palace itself is not open to the public, but the Gardens are open to the general public. The Gardens also have a small beach at the end of it that has a bridge that leads to a small island. If you need tranquility and peace, then Montazah Gardens is just the place for you to visit.

There are many minibusses that go to the Montazah Gardens that charge around 1-2 EGP but it is best that you take a tour guide with you, so you don’t get lost on your way.

Anfushi is the working class district of Alexandria that expands left from Fort Qaitbey. It contains some of the best seafood restaurants in Alexandria. Anfushi is the city’s liveliest area to visit after sundown. If you are a fan of coffee houses, fish and shisha then this is the best place for you. 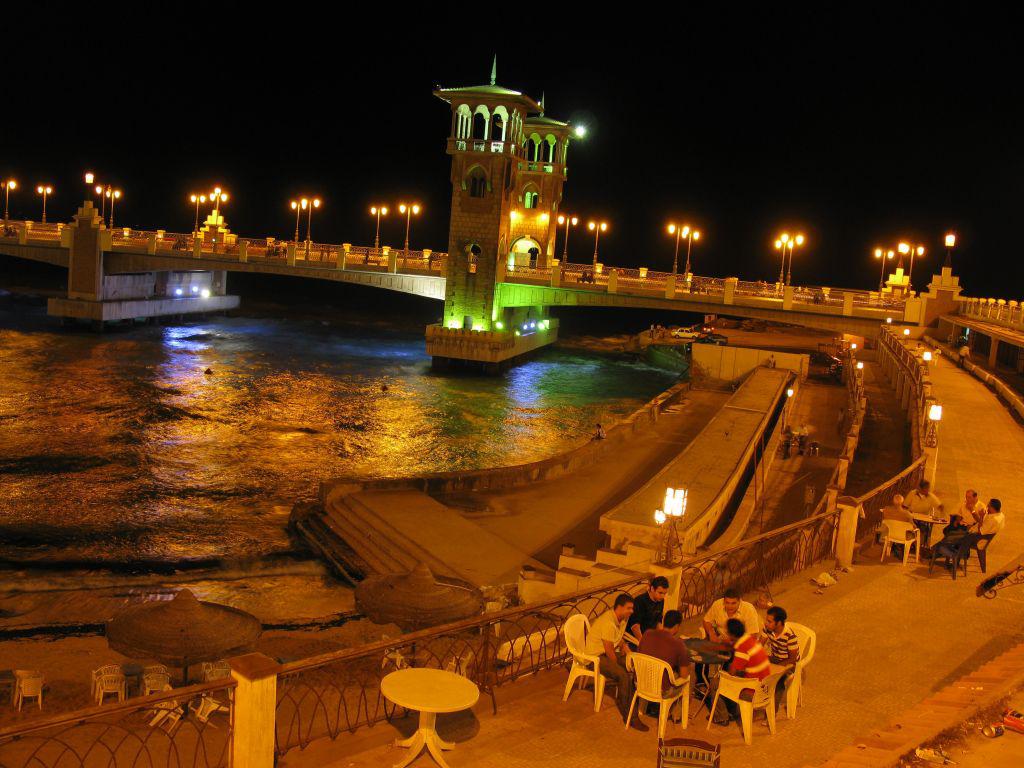 Qasr Ras el-Tin Street consists of Alexandria’s fish market, which is an attractive spot for many photographers.

Read our previous article Sylhet: The face of Modern Bangladesh

Read our next article Edinburgh: The city of the castles