For your next wildlife safari, are you looking for a thrilling dive with the infamous predator of the ocean or a tranquil moment with the animal that is famously known for forever being stuck in slow motion? How about a rewarding holiday with the sharks and koalas of Australia or the sloths of South America?

Check off another box from your bucket list on your next safari holiday and dive with the sharks of Australia. You will be in the safe confines of a cage so you won’t have to worry about reenacting Jaws anytime soon. Out of the 370 or more species of sharks in the world, 100 of them are living in the waters of Australia. This high number of shark species along the coastline of Australia is an indication of how healthy the marine ecosystems are. The crystal and clear waters of South Australia are one of the best spots to see these protected sharks in their natural habitat and one of the few places in the world where you can get up close and personal with the legendary Great White Shark.

On your safari trip, see the Great White Sharks that can grow up to 6m long and weigh more than 2,000kg with a mouth full of 7.5cm long razor-sharp teeth. The majority of the 100 species of sharks in Australia are not aggressive under most circumstances but the white, bull, and tiger sharks are considered the most significant threat. But despite this terrifying fact, the truth is, you are five times more likely to get struck by lightning than to get bitten by a great white shark. The great white shark is a magnificent yet misunderstood species that play a vital role in the nature of our open oceans. Appreciate its magnificence in a once-in-a-lifetime cage-diving experience. 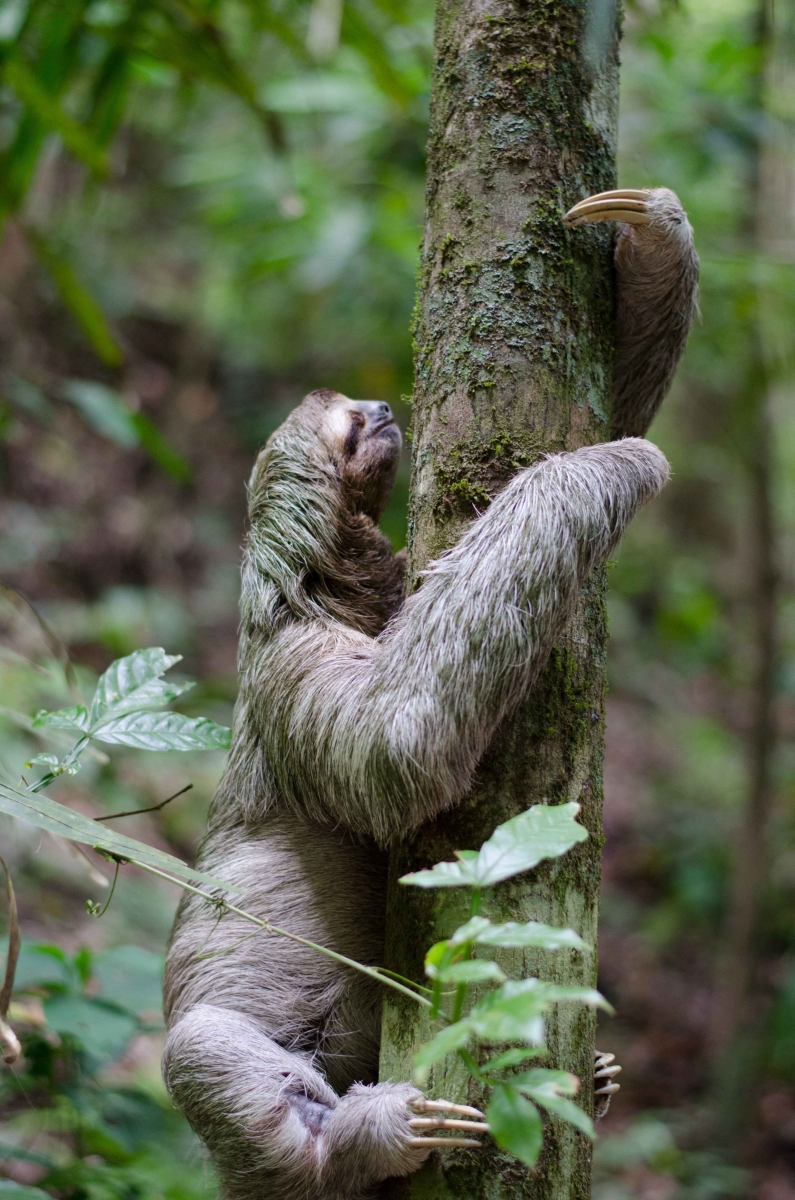 Go on a safari tour in South America where the sloths originated in the late Eocene period, “the dawn of recent life.” Ancient sloths could grow as large as an elephant and roamed North America until they became extinct around 10,000 years ago. There used to be over 35 types of sloths but now there are only 2 types of sloths – the two-toed sloth and the three-toed sloth – with 5 species living in the tropical rainforests of Central and South America. The two-toed sloths of South America are herbivores and eat tree leaves, shoots, and some fruit. They also have short flat heads, short snouts, and tiny ears.

The safari and the world’s slowest moving animal move only about 53 feet per hour on the ground and about 480 feet per hour in the trees. It is so slow that algae grow on its fur but this also helps them blend better among the trees to hide them from predators. A sloth’s life revolves around sleeping and eating and they can sleep from 15 to 20 hours per day in captivity. The sloths of South America also carry most of their activities – eating, sleeping, mating, giving birth, and tending to their young – hanging upside down in trees and they may live up to forty years. Learn to live life nice and slow with these amazing creatures. 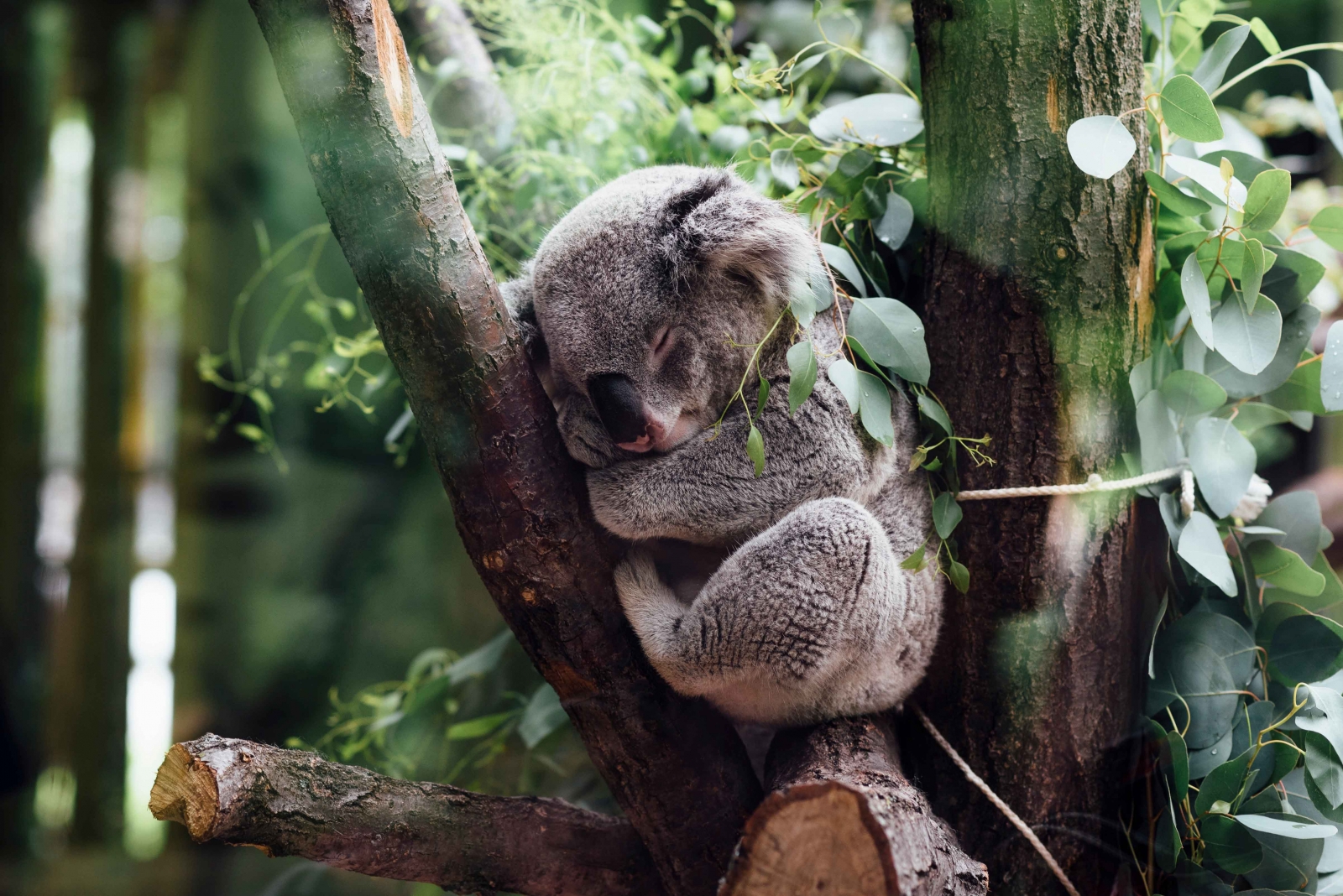 Visit the koalas on your safari travel to Australia. Because of the destruction of its natural habitat, there are likely to be less than 80,000 koalas remaining in Australia and their population has even dropped by 90% in less than a decade. Each koala’s home is made up of several “home trees” covering a “home range” area that these koalas like to regularly visit. Logging, agriculture, and urban development have not only reduced the area available to them but also added other dangers such as road kill, attacks by neighboring pet dogs, and disease. Koalas can only live in Australia which is why it is vitally important to save what is left of their natural habitat.

Never mistake the koalas at the safari park for bears because they are actually marsupial mammals that are closely related to kangaroos and wombats. The only reason why they are called koala bears is that they look like teddy bears. Similar to kangaroos, koalas are born immature and they develop further in the safety of a pouch. They are mostly nocturnal and often sleep up to 18 to 20 hours each day to conserve the energy needed for digesting their toxic, fibrous, low-nutrition diet. So there is no such thing as a koala who’s drunk on gum leaves!

Take a luxury safari to Australia and South America and get acquainted with the misunderstood sharks, slow sloths, and sleepy koalas. Tick off a box in your bucket list and take a dive with the sharks or learn to take it slow with the sloths and the koalas. A trip with these animals will surely be an experience worth remembering for a lifetime. Not only will you get a thrilling and memorable experience, but you will also learn a lot about these creatures and why they are worth protecting. There are so many wonderful animals in the world and these three are surely worth your attention.