METEORA - medieval monasteries under the heaven (part I)

There is nothing on the planet more bewitching, unusual, so hard to reach, and at the same time so attractive, created at the cost of colossal human efforts, and imbued with faith in purity, God and paradise .... These buildings rose high on the rocks and almost reached the sky, and they are called - Holy Christian monasteries in Meteora, inferior in importance only to the sacred Mount Athos! 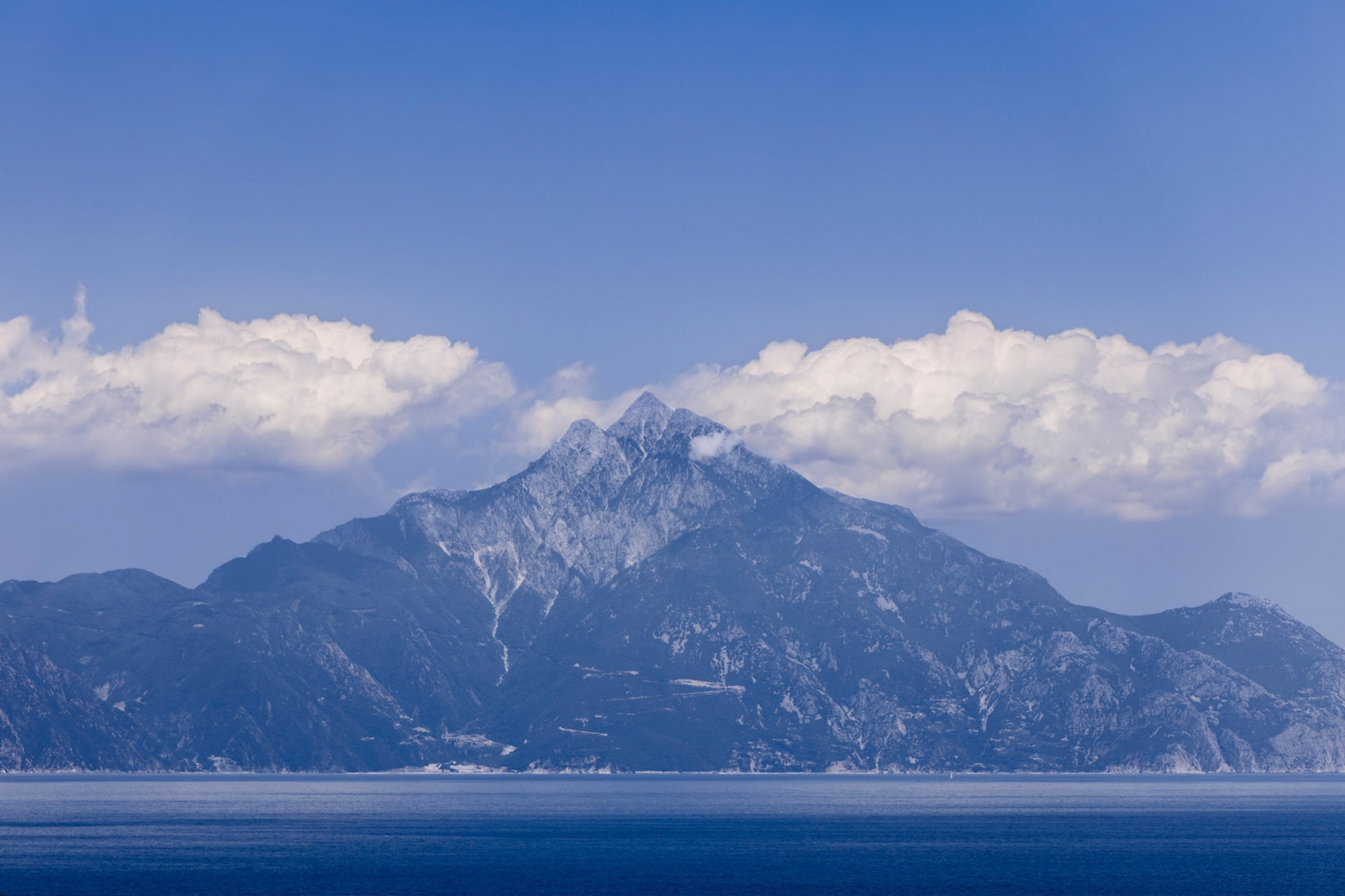 Mount Athos is very high (2,033 m or 6,670 ft) right next to the shore. During summer times the heat, evaporation, and cold air create a cloud around the top,

The Meteora complex is located in the Thessaly plain region, Trikala prefecture, Kalambaka province, Greece, east slopes of the Pindus mountains. All of the monasteries are located on the southern steep slopes of the mountains of Andikhasia, north of the E87 highway between the villages of Ioannina and Larissa, in the upper reaches of the valley of the low-water Pineios River, 1-2 km north of the village Kalambaka and 25 km north-north-west of Trikala. The area where the monasteries are located is about 2-3 km from southeast to northwest and 1.5 km at its widest point (including the village of Kastraki), which is approximately 375 hectares. 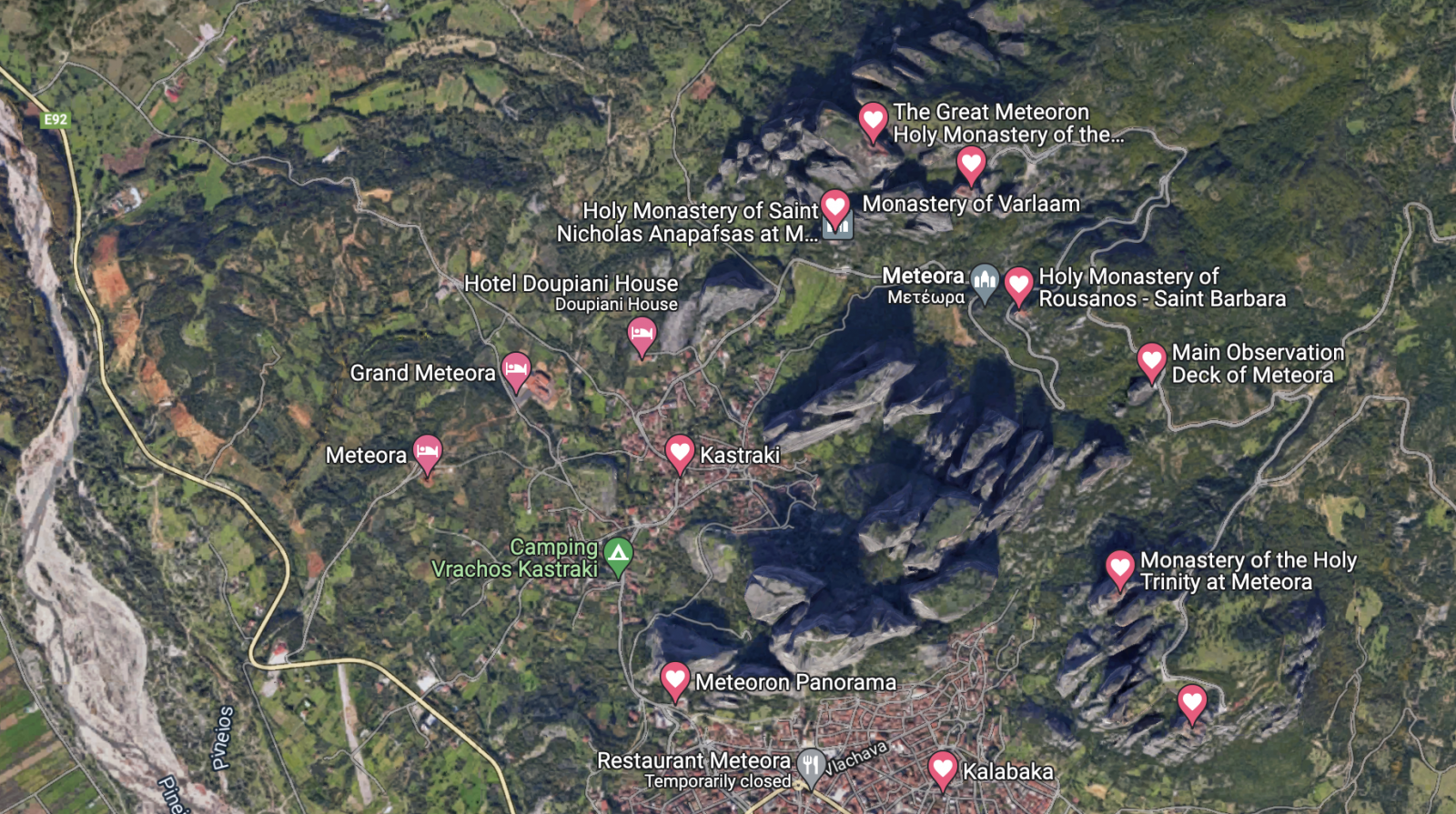 The monasteries are built on rocky peaks called Meteora, which are of deltaic origin, consisting of brown sandstone and other rock fragments, rising more than 400 m over the Thessalian plain. Their chemical analysis and geological evidence suggest that the peaks were created about 60 million years ago during the Tertiary period, rising from the mouth of a river and undergoing further transformation through numerous earthquakes and erosion. 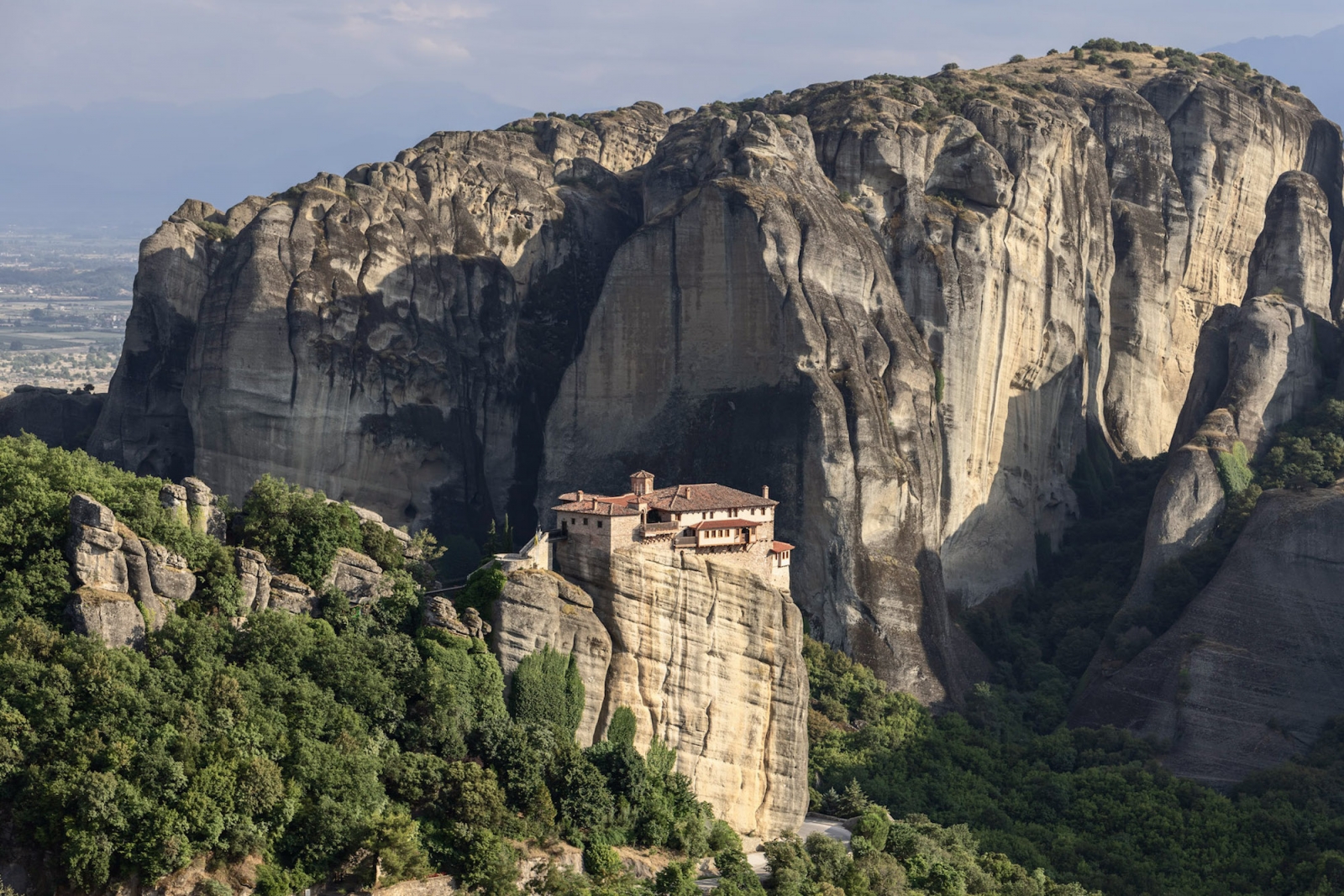 The landscape includes riverine forests of Platanus orientalis and species such as the endemic Centaura lactiflora (found near the village of Koniskos) and Centaurea kalambakensi. The closest protected area is the Trikala Aesthetic Forest (28 ha), established in 1979, which is cultivated with Pinus halepensis and Cupressus sempervirens. The attainable vegetation cover is illustrated as supra-Mediterranean, with a close cover of Quercus and Ostrya and Fagus forest above 700 m. 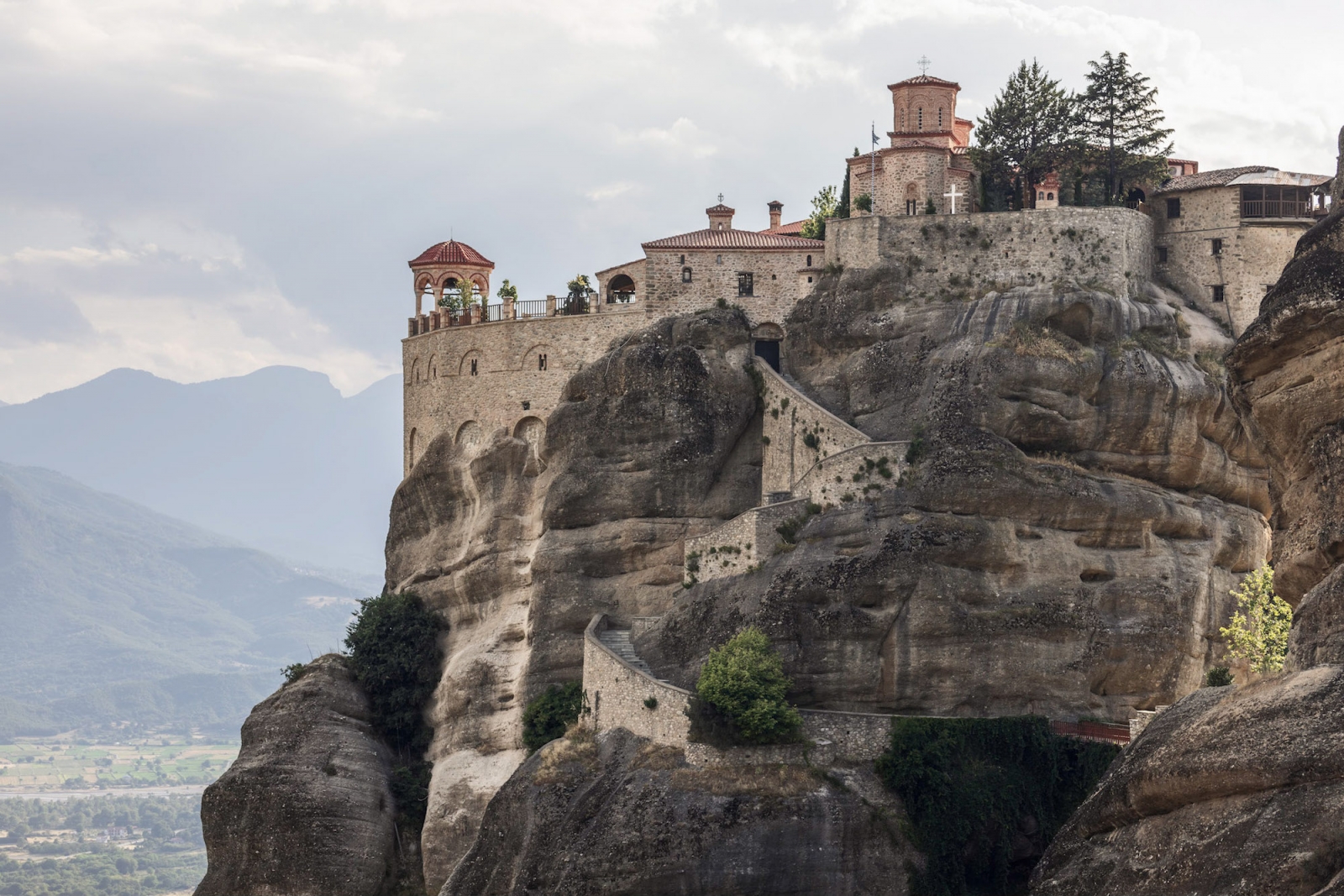 The Meteora group consists of 24 separate monasteries, but only 6 of them are open to tourists. And of course, the organization of this rather complicated trip would be better to order from a local private guide in Greece, who will make a convenient route, knows the schedule and roads and millions of other secrets hidden from regular visitors! 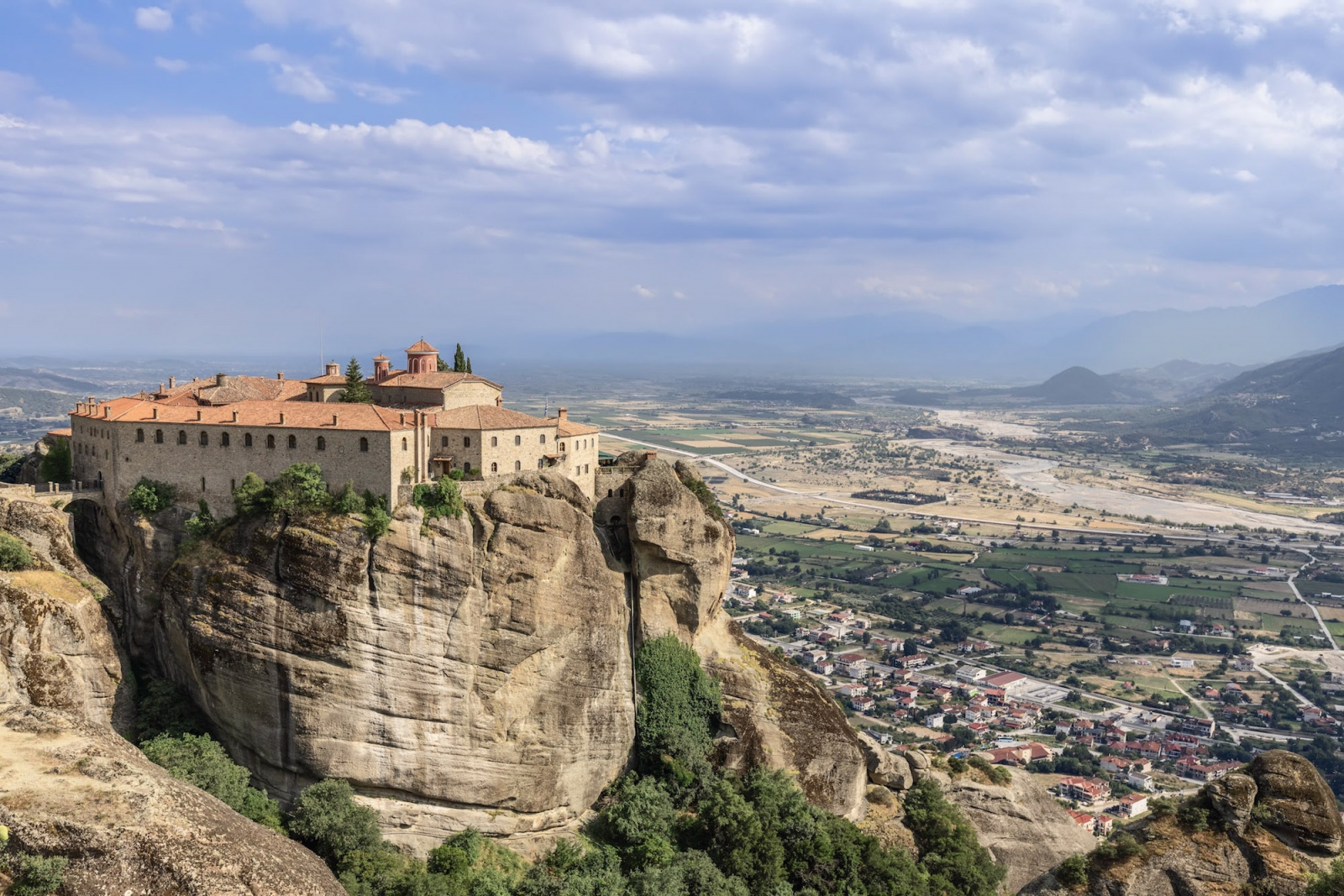 They are built directly on the surfaces of rocks without a foundation as such. Access to the monasteries was initially (and in some places still) difficult. The religious life that began in hermitages can be outlined back to about 1000 AD, with the first monastic community emerging in the 14th century, and reaching its peak in the 15th-16th centuries. By the 17th century, the ascetic residents had reduced to one-third of their authentic size. During World War II, the site was attacked by the Germans and many art gems were stolen. 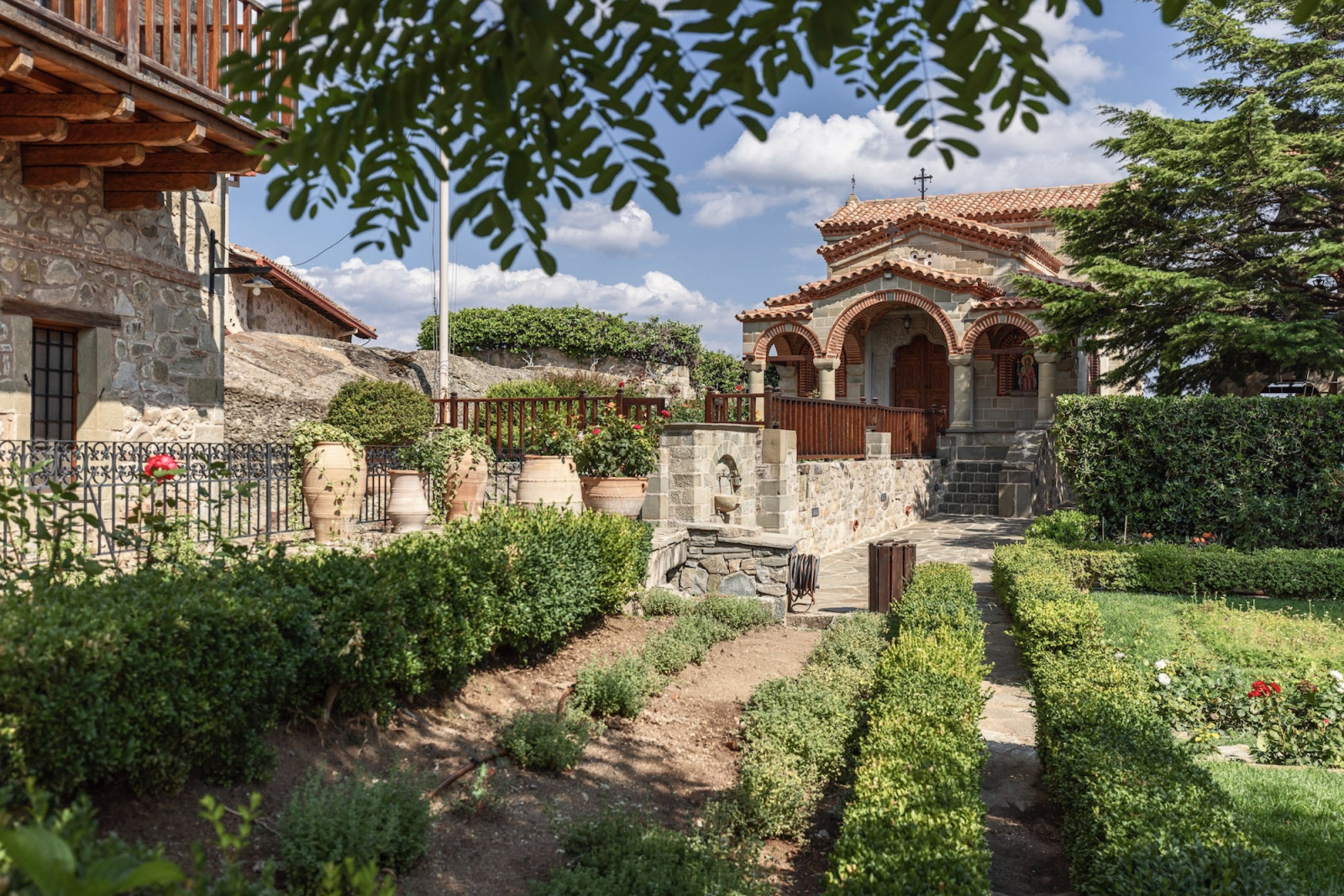 Since 1972, the monasteries have been repaired and preservation work is carried out annually by specialists, including archaeologists. Conservation work uses a variety of techniques, including chemical research of pigments and concrete. The monasteries are located in an area within which various types of construction work are prohibited or restricted. 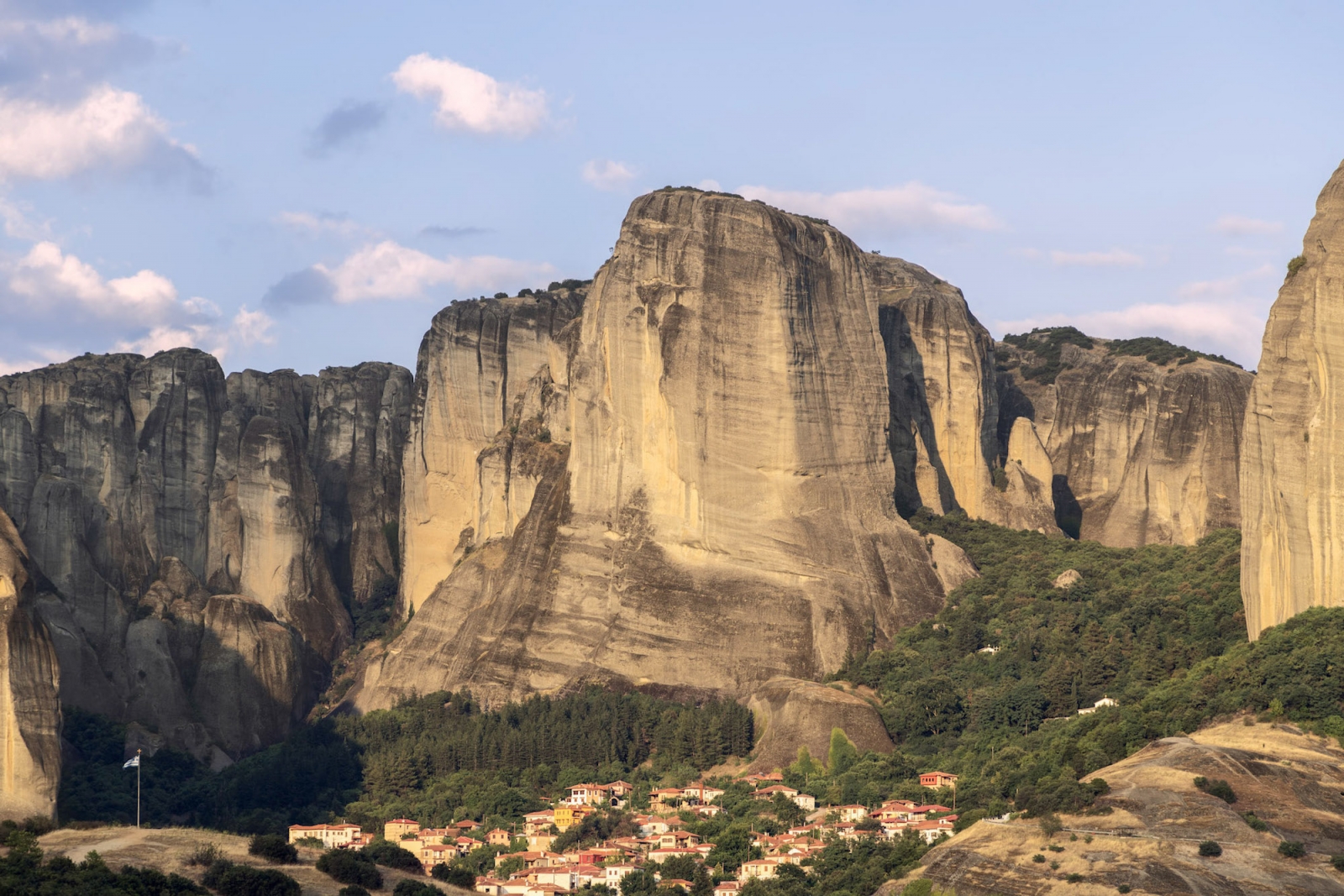 Rocks of various forms and sizes which make up the Meteora complex encircle the townlet of Kastraki, its' title is derived from the word kastro, or "Byzantine castle", that is in ruins today

The main dangers to objects are both natural and anthropogenic. The first contains the possibility of earthquake crack; tremors occur here often, but, fortunately, not of high intensity. The latter include atmospheric troubles by low-flying airplanes and uncontrolled clearing of sycamore forests in valleys. As a result of excessive disturbance and changes in farming practices, vultures require access to safe artificial feeding grounds. Being such enormous, unexpected rock pillars, rockfalls are a consistent threat to pilgrims and tourists in Meteora.

COMPARISON WITH OTHER AREAS

The natural features of this place are the large and picturesque sandstone pillars that form citadels, on which seven monasteries were built a few hundred years ago. Similar sandstone pillars can be seen in many other places around the world (primarily in several national parks in the U.S. state of Utah, USA), but the Meteora group differs in that these stones are used as the foundation of religious structures. There are some similarities to the Göreme World Heritage Site in Turkey, but here the structures are conical and composed of volcanic lava and tuff. 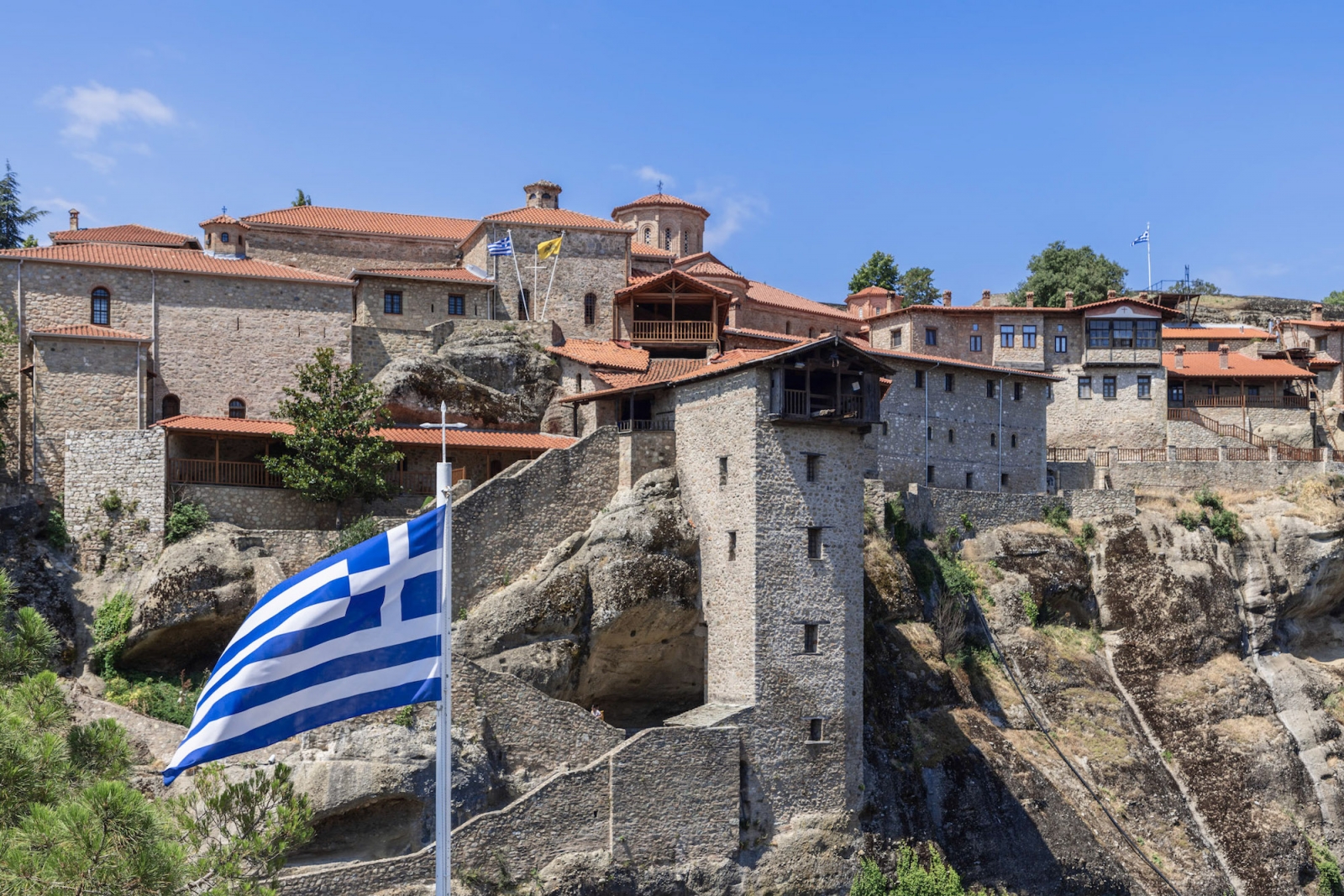 The monks had to drag stones and other building materials on their sometimes elderly shoulders over these rocks in order to build a monastery. Sometimes they had to be lifted from the very foot of sheer cliffs. Since the monks had to defend themselves from robbers and robbers who often attacked, they could not build a normal staircase even for their own convenience. The special rope belt, and sometimes connected from simple monastic clothes, ladders were used.

With private tour guides registered on our website, you can find itineraries for one-day or multi-day excursions from Athens and other big cities in Greece, which include visits to the monasteries in Meteora.

Be prepared that you will sometimes have to climb very steep steps to reach the entrance to this or that unique monastery. In addition, you must be dressed appropriately for the occasion. Men must not wear short shorts, and women are only allowed in long skirts and off-the-shoulders (a shawl can also be rented). That is why in all abbeys women are asked to put on a long skirt, rented or bought as a souvenir, before entering. Good walking shoes with non-slip soles will also come in handy. It is not enough for women to just cover their knees, so no pants or shorts. Men should wear a T-shirt or a long-sleeved shirt. Please do not forget that monasteries are places of sacred religious worship, so be respectful and behave properly towards its ministers. 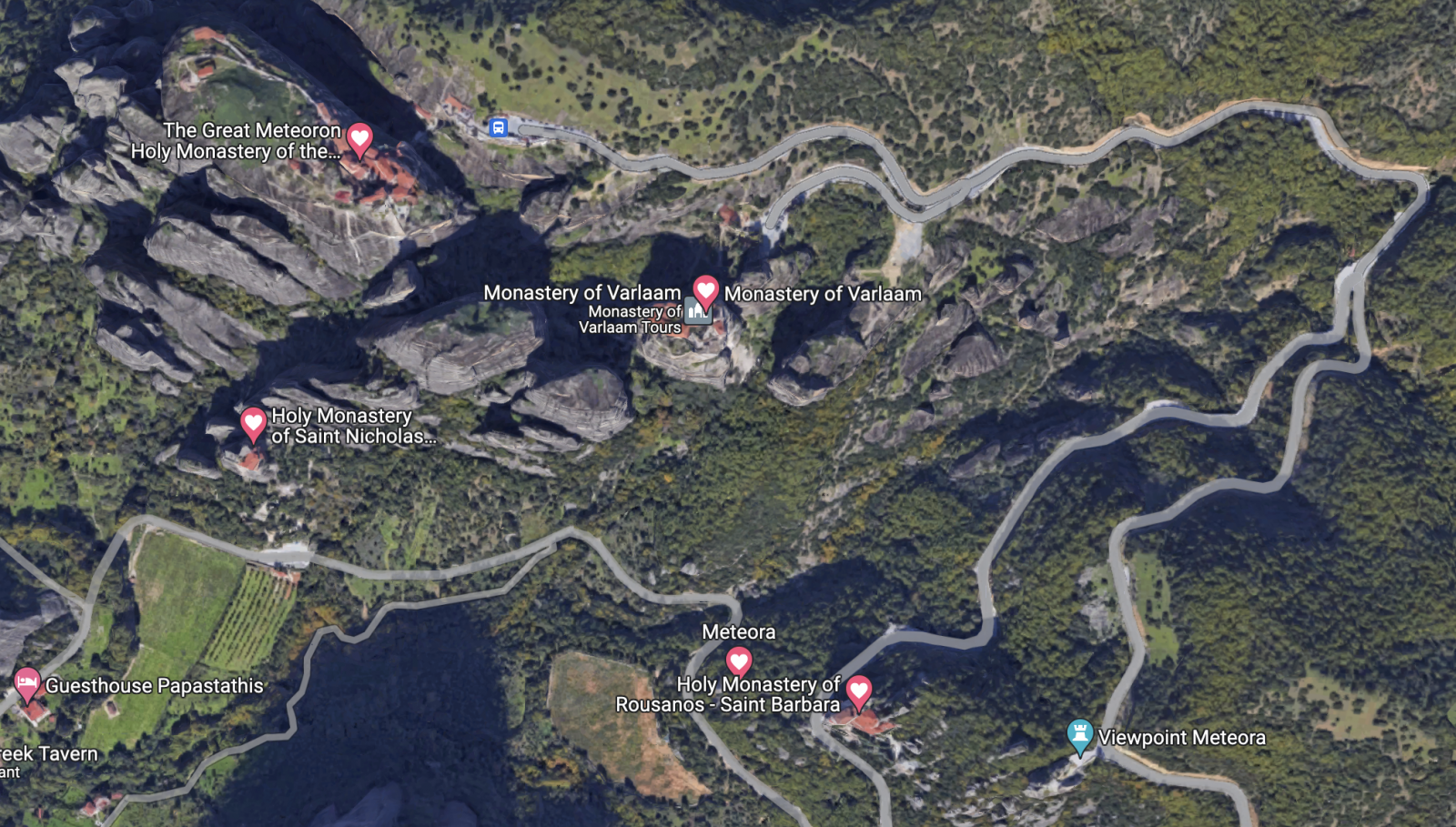 As for the reach of the shrines, you should not worry - even elderly tourists can master the stairs, for example, the Monastery of the Holy Trinity or the Great Meteoron, where they are less accessible (more than 300 steps must be overcome). Monastery of St. Rousanou, Monastery of St. Varlaam, and St. Nicholas Anapausas have an average of 140 steps. Some monasteries, in addition to stairs, need climbing uphill along neatly paved, non-slippery paths with railings. 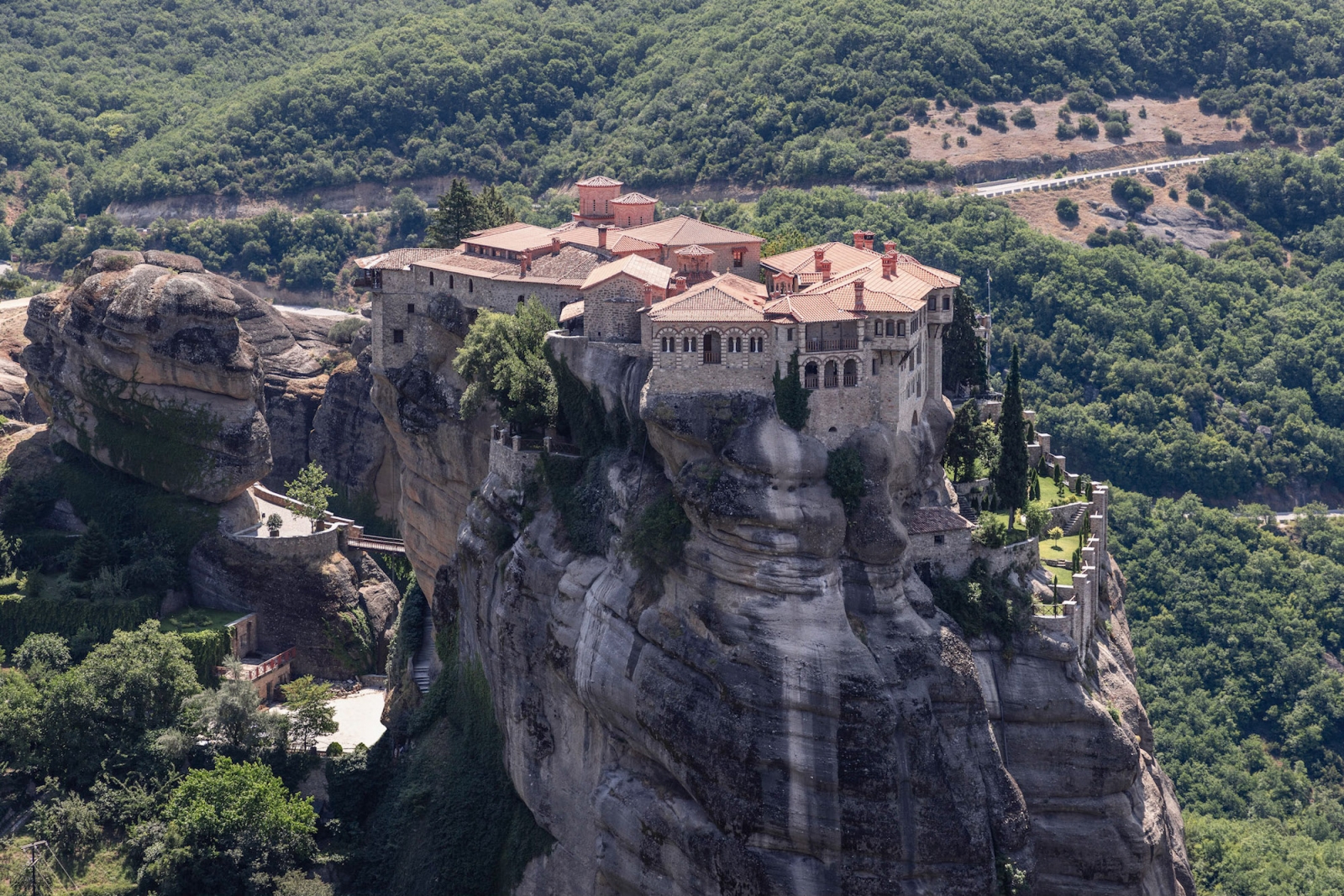 Everywhere in the Meteor area, you will find highways serpentine around a beautiful landscape with enchanting views and observation decks. Do not miss the opportunity to take a stunning and successful photo of the monastery from one of them, or even several monasteries at once, if you are lucky with the angle. In the meantime, a record - the photographer managed to capture 4 monasteries at once in 1 picture - rare luck and a keen eye! Coming here, you can quickly and without hassle get from one to another monastery in a few minutes. They each have their own car park, usually free of charge, as are some of the scenic viewpoints, which means that getting around this architectural and religious open-air museum is quite easy.

Be aware that there is always one monastery during the week, closed to the public in the middle of the week. Therefore, listen to the suggestions of private tour guides in this region - they certainly know the schedule by heart. You do not need to buy tickets in advance (unless you are traveling by bus as part of a group of 50 tourists).

Surprisingly, these 6 monasteries are still active places of pilgrimage, and although the parking lots and stairs have long since replaced the baskets and ropes used in the construction of these heavenly temples, visiting Meteora is like a giant leap back in time, into the past. 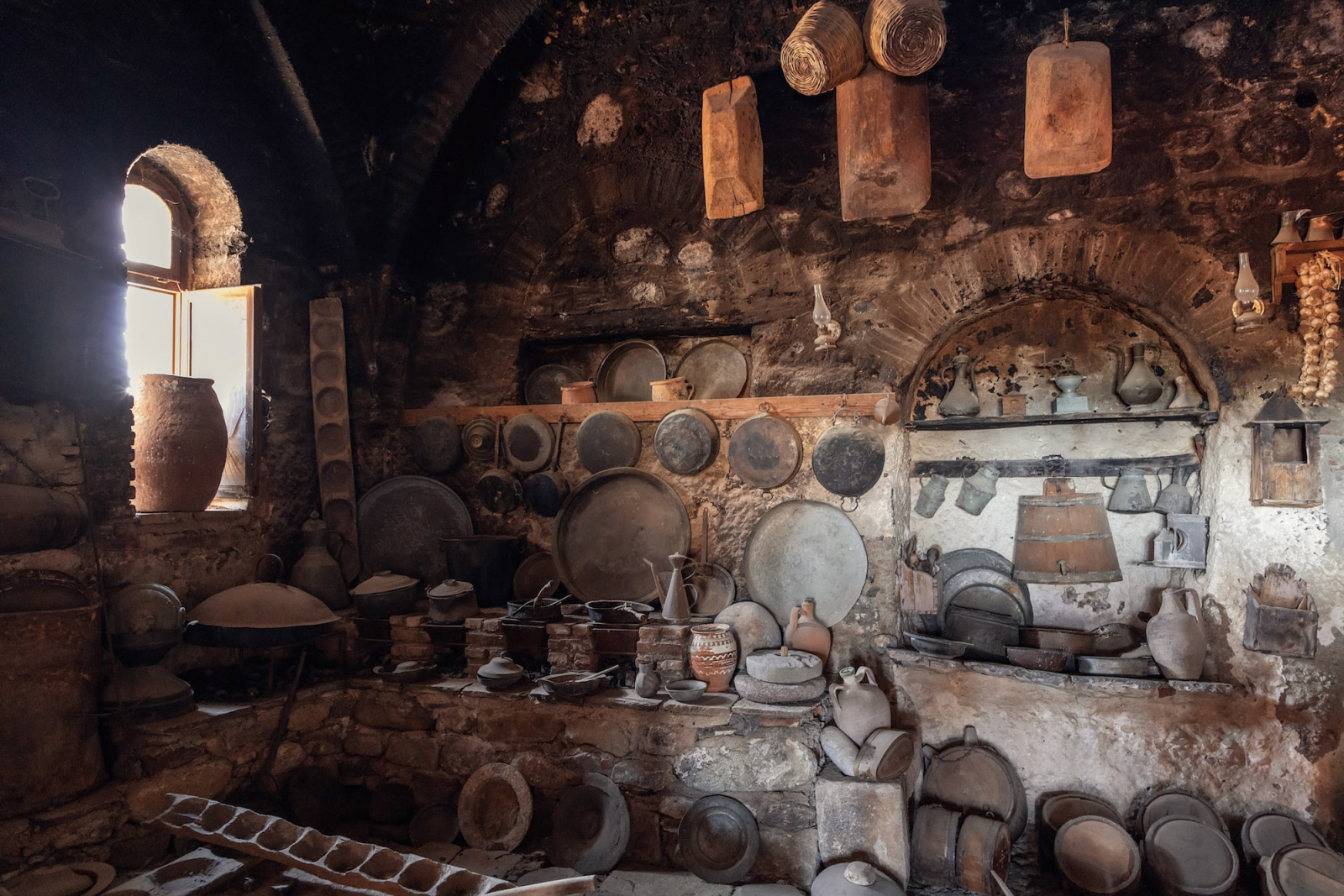 Start by visiting the sacred monasteries Monastery of Great Meteoron and Monastery of St. Varlaam in the early dawn.

Skip St. Nicholas (the first monastery you come across on your way down the road), drive past the monastery for a little over 100 meters and park your car on the side of the road. Here the footpath begins to rise to the Great Meteoron and Monastery of St. Varlaam (look for a small nondescript wooden bench without markings). The hike to the Monastery of Great Meteoron will take about 45 minutes and will mostly be on the shady side during these morning hours, but the path is bumpy and uphill. About 3/4 of the way you will reach a fork in the road - take the left path to continue towards the Great Meteoron.

The Holy Monastery of the Great Meteoron is the largest and oldest monastery left in Meteora, founded in the 14th century by Saint Athanasius the Meteorite. The monastery has a gallery and the main church, but take your time and spend time admiring the breathtaking view of Kalambaka from the observation deck from its enclosure. 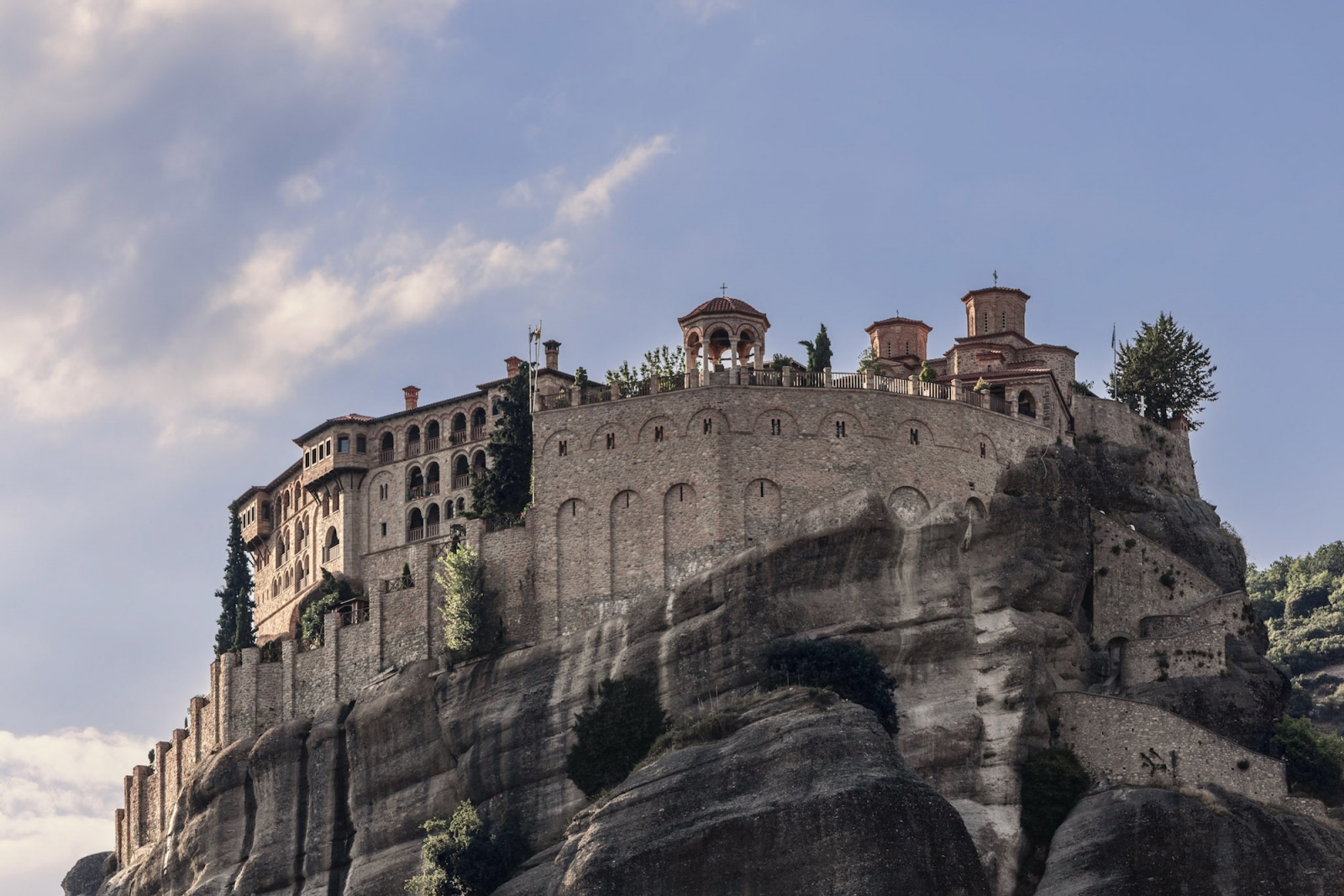 Wander around the Great Meteoron and after that walk a few steps to another neighboring monastery - St. Varlaam, which is located next to the elder brother. Founded also in the 14th century, the Monastery of St. Varlaam is the second largest in Meteora and is considered the guardian of the finger of St. John and the shoulder blade of St. Andrew. You can easily spend 30-40 minutes wandering around each monastery and looking at the chapels, courtyards, cellars, and monastery shops for cute souvenirs and monastic delicacies like honey. If you still have some power then go to have a look at The Dragon Cave located to the south, below the monastery. If you move a bit to the east, you can meet the ruins of Kelarakia opened recently. The Cell of St. Paul the Apostle can presumably be recognized with Kelarakia. 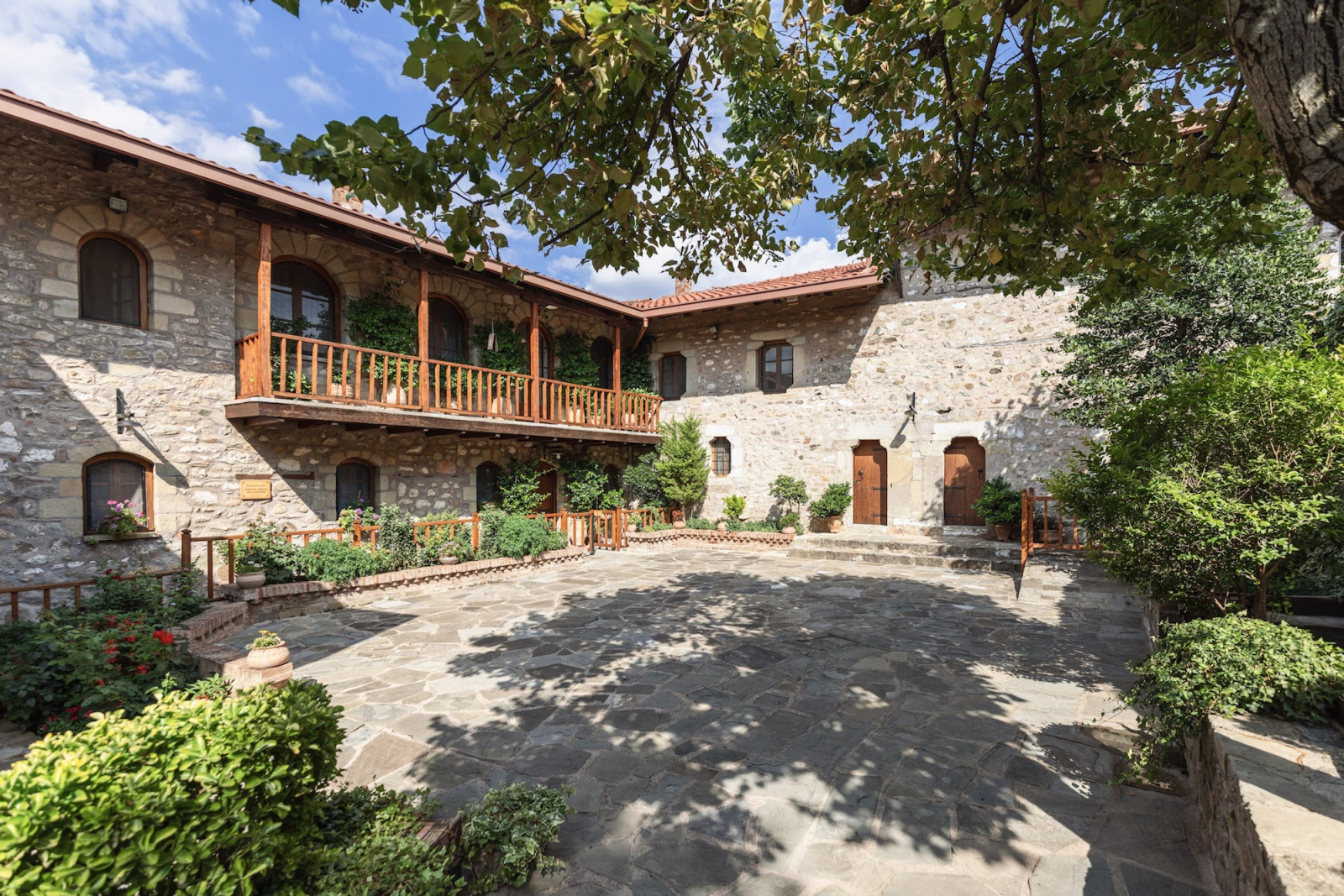 And at the end of the route, do not forget to go up to the observation deck of any monastery and raise your head up or look around! And listen to the sound of the wind and feel the peace - you are behind the clouds! 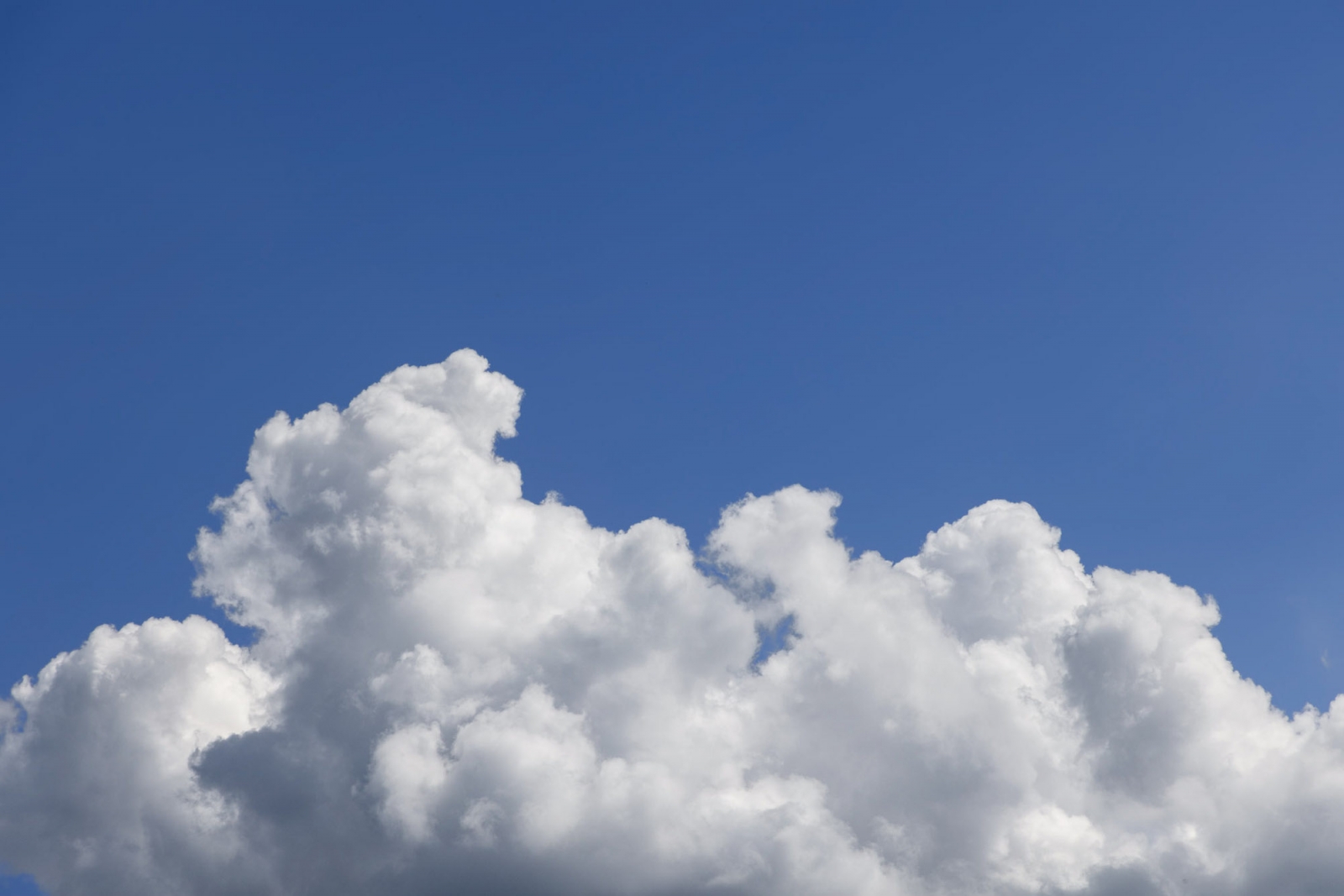 Read our next article Nepal and the charm of its majestic mountains!