Istanbul - familiar and unknown at the same time

If you are in Istanbul on a short visit, then we will tell you how to cover the most important things in this city. Of course, a short informational report is not enough for an inquisitive traveler, which is why we recommend that you contact a private tour guide who, together with you, will go through the entire route planned with your participation through the narrow streets and huge squares of this ancient city. 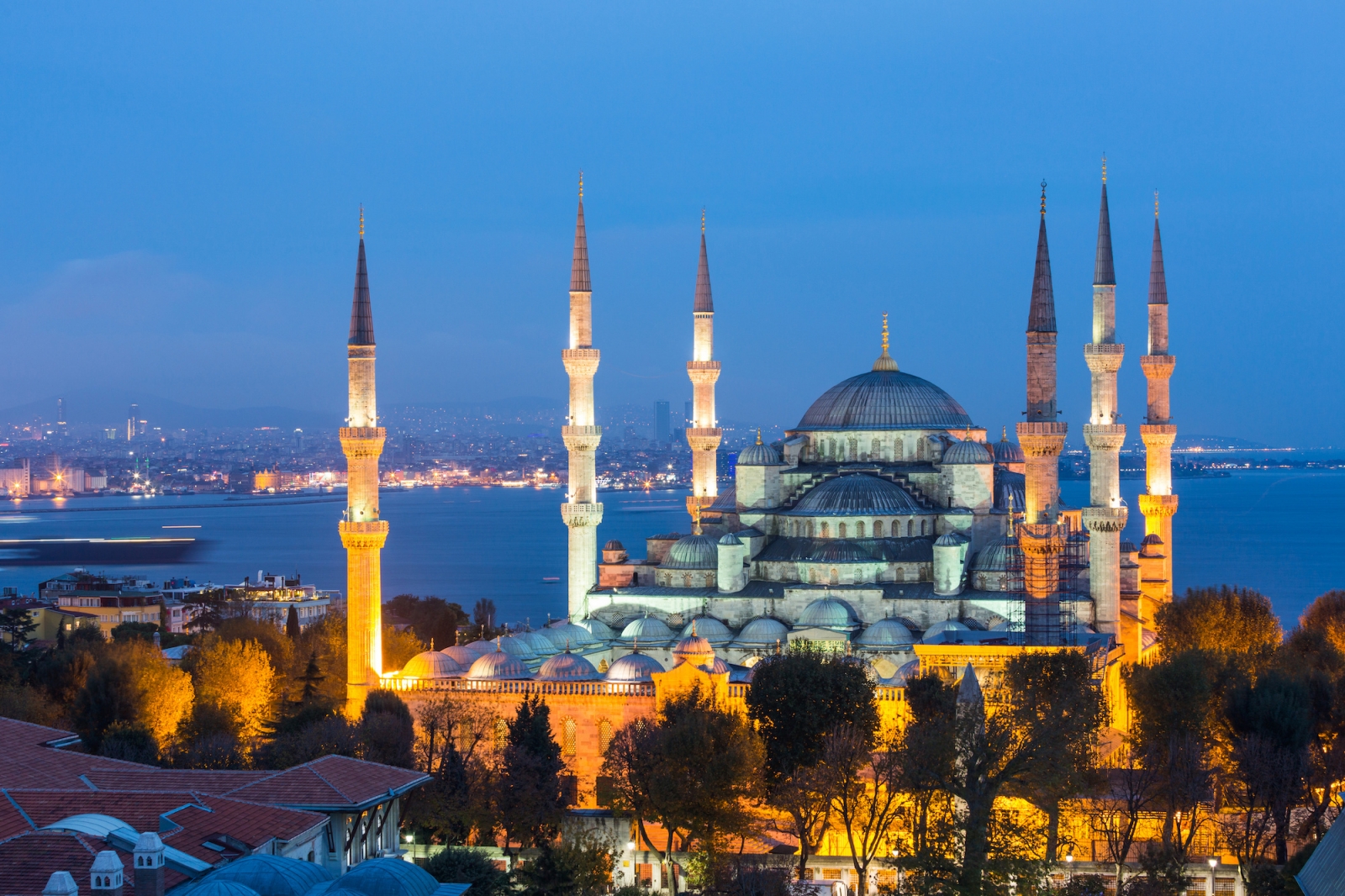 Founded by the ancient Greeks in the 7th century BC, Istanbul is the only city in the world located on two continents at once, it managed to be the capital of four empires and absorb the spirit of three religions. Many sights of the Greek, Roman, Byzantine, and, of course, the Ottoman period have been preserved here, while Istanbul is a huge modern city, even according to official sources its population is 15 million people, but not officially it comes up to 20 million living here.

The territory of Istanbul exceeds 5,000 square kilometers, so it is not surprising that it is very easy to get lost in this Byzantium city. If you come to Istanbul for the first time, then the most convenient places to stay and explore the sights are the Sultan Ahmed area, Beyoglu, and located on the Asian coast Kadikoy, although the latter seems a bit out of the way, river buses regularly depart from its pier to the Galata Bridge, so it is easy to get from there in any part of the historical center. The boat trip takes about 20 minutes and costs less than 1 euro, and each of these areas is easily accessible by direct buses from the new Istanbul Airport, the journey takes about 60 minutes. 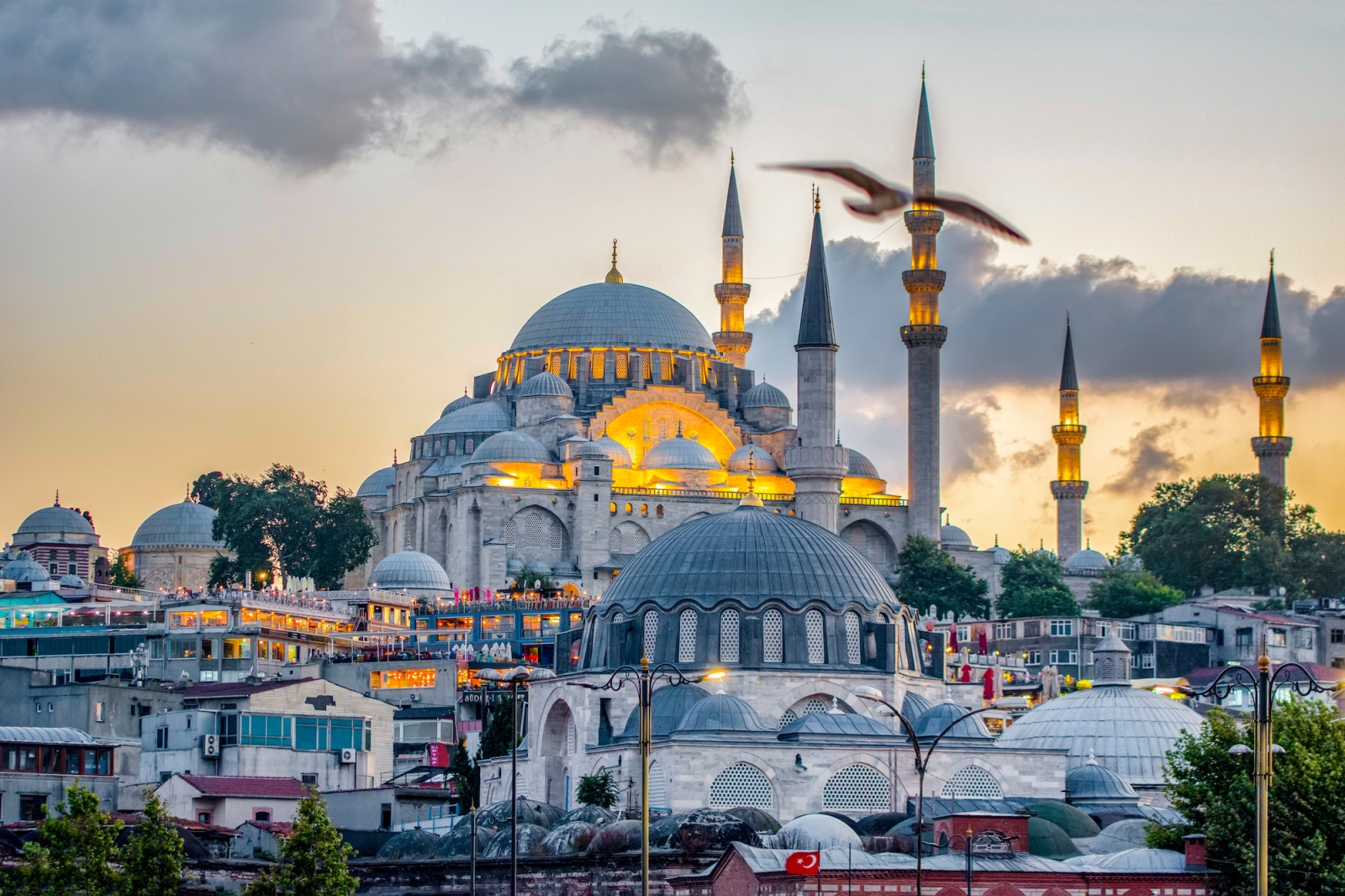 Any local private tour guide will tell you that the best place to start exploring the city is Sultan Ahmed Square. It is here that the density of key attractions is highest in the center, and you can get around all the most important things quickly enough! 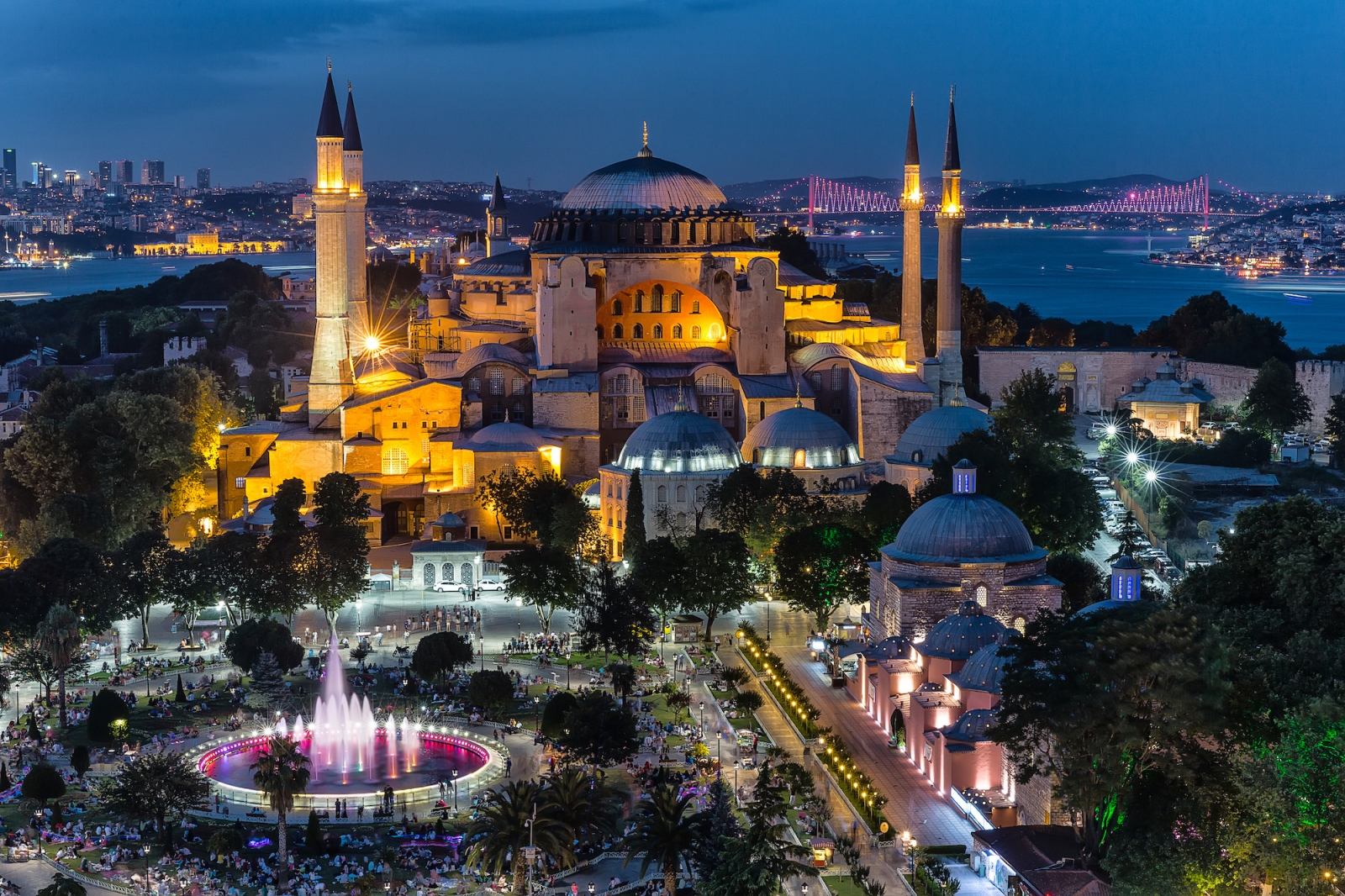 When traveling to Istanbul for one or two days, it is also ideal to choose a hotel somewhere near the square. Oddly enough, they are relatively inexpensive here. It is believed that the evening and nightlife in the Sultan Ahmed area are not the most diverse, but this does not mean that there is nothing to do in the evening. As elsewhere in Istanbul, there are a large number of cafes, restaurants, and hookah clubs for every taste and budget. In addition, you can take the T1 tram or metro to the vicinity of Bayazet Square and easily find yourself in all the key places in the city on the European side.

Napoleon Bonaparte: "If the Earth were a single state, Istanbul would be its capital" 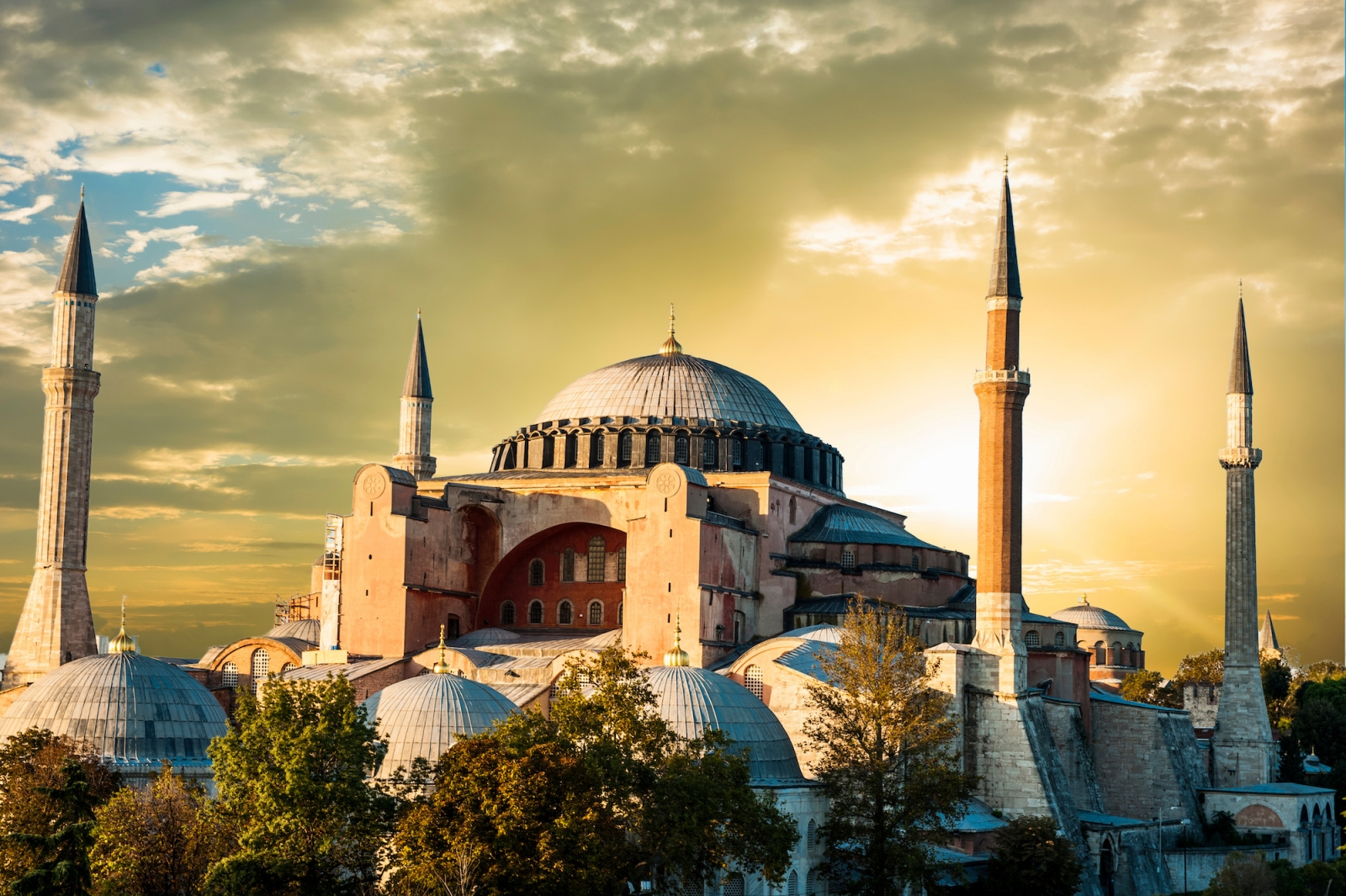 A must-see in Istanbul is Hagia Sophia, it was built in 537 AD in a record 5 years and they say that its construction took a three-year budget of the entire Byzantine Empire. Throughout its history and under many rulers, Hagia Sophia has remained a cult place for the city and the whole world. For almost 1000 years, it served as the main patriarchal temple of Constantinople, managed to be a Catholic basilica, and after the bloody capture of the city by the Ottomans, it spent almost 500 years in the stable status of the most important mosque.

It is strange but interesting that the Ottomans who captured the city did not destroy Christian frescoes and mosaics on its walls, but simply covered them up with plaster, thanks to which a significant part of them have been perfectly preserved to this day. Since 1935, for the next 80 years, Hagia Sophia was functioning in the status of a historical museum, the ancient images and frescoes were cleaned up, and everyone could admire them at any moment.

This continued only until 2020, when, with the return of the previous status of a mosque to Sofia, the images of Christian saints were again hidden from visitors…. from everybody. Nevertheless, even with the hidden frescoes, Hagia Sophia continues to be the main and most beautiful pearl of modern Istanbul and the symbol of the Byzantium Golden Age! 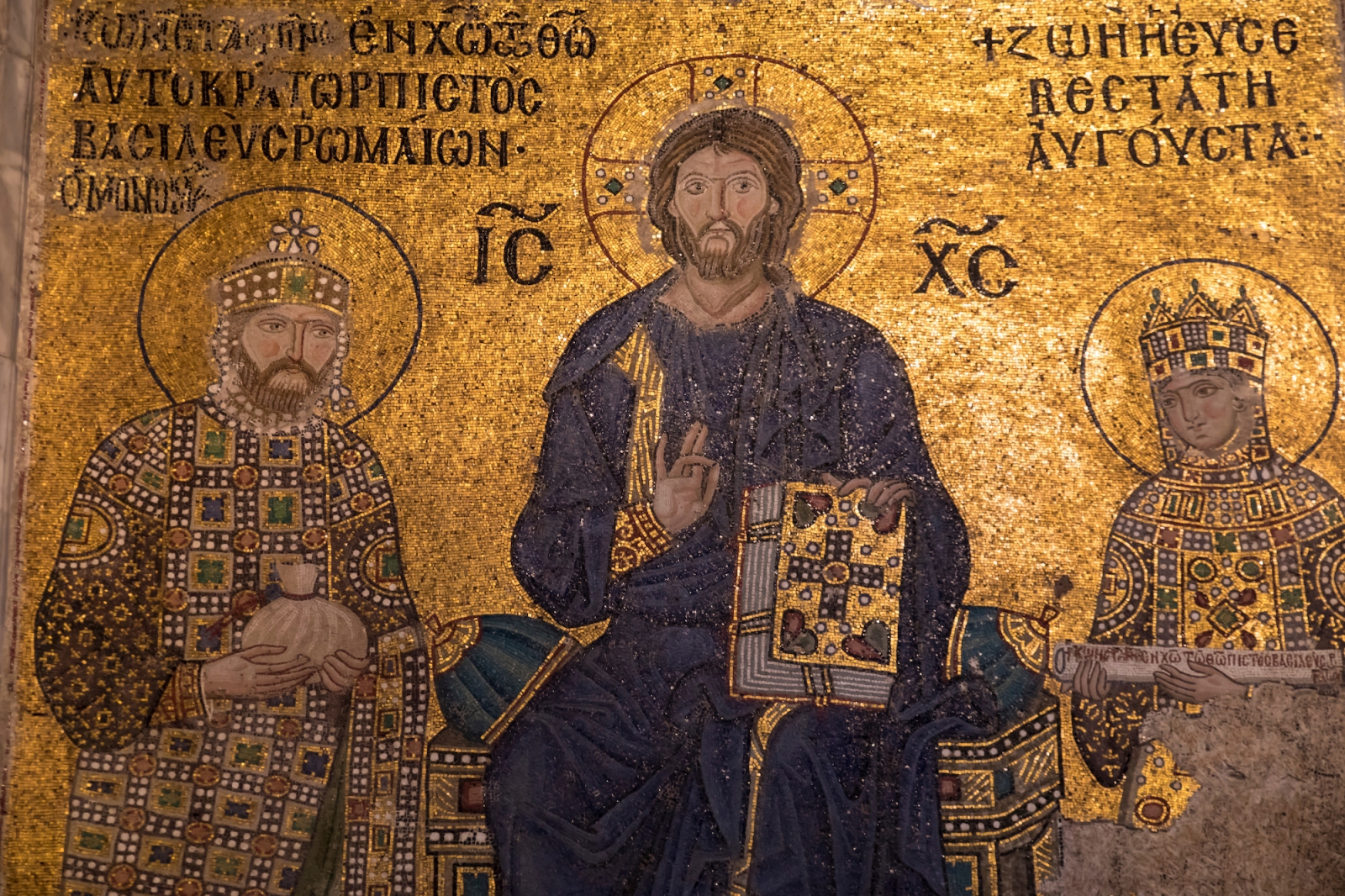 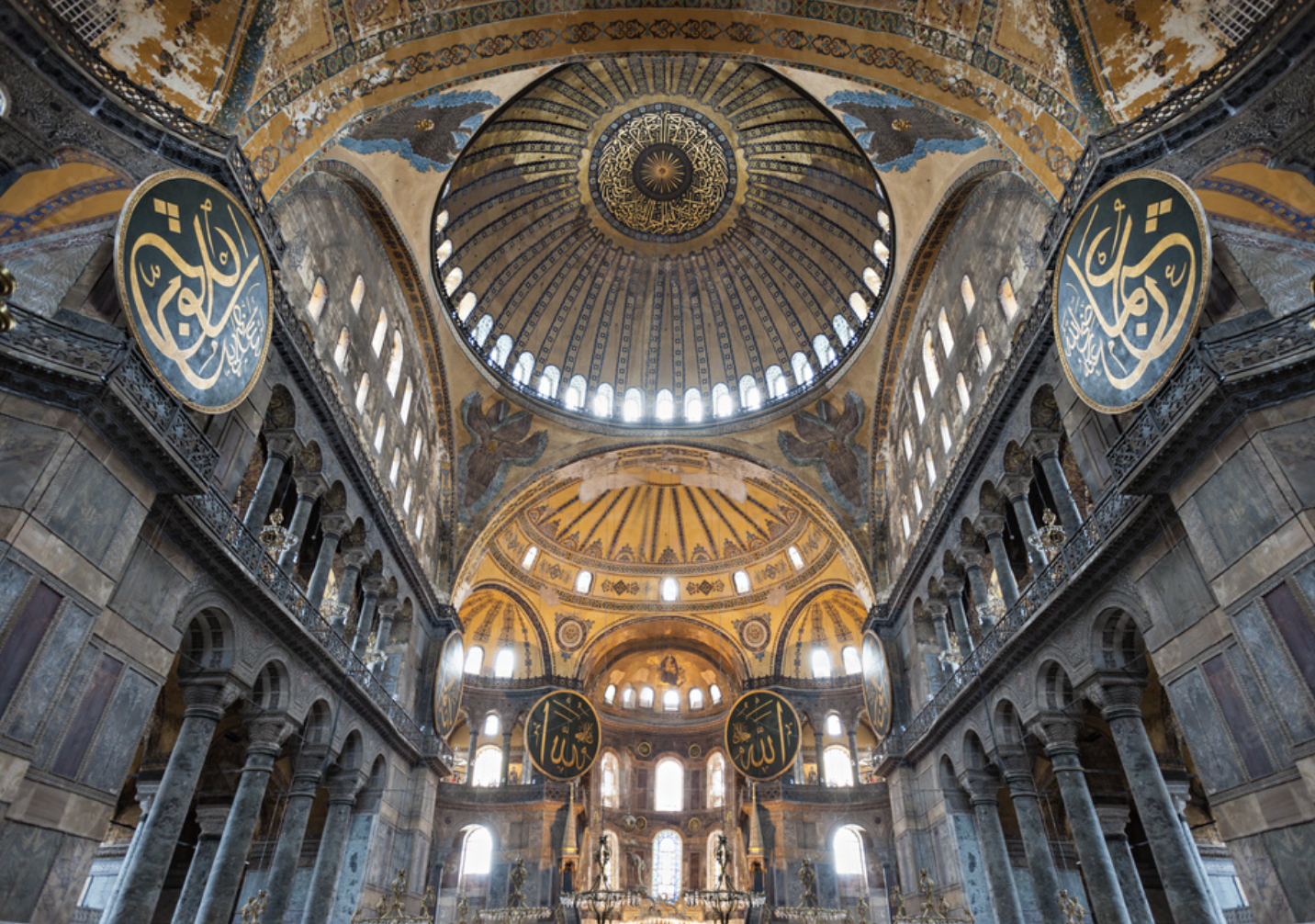 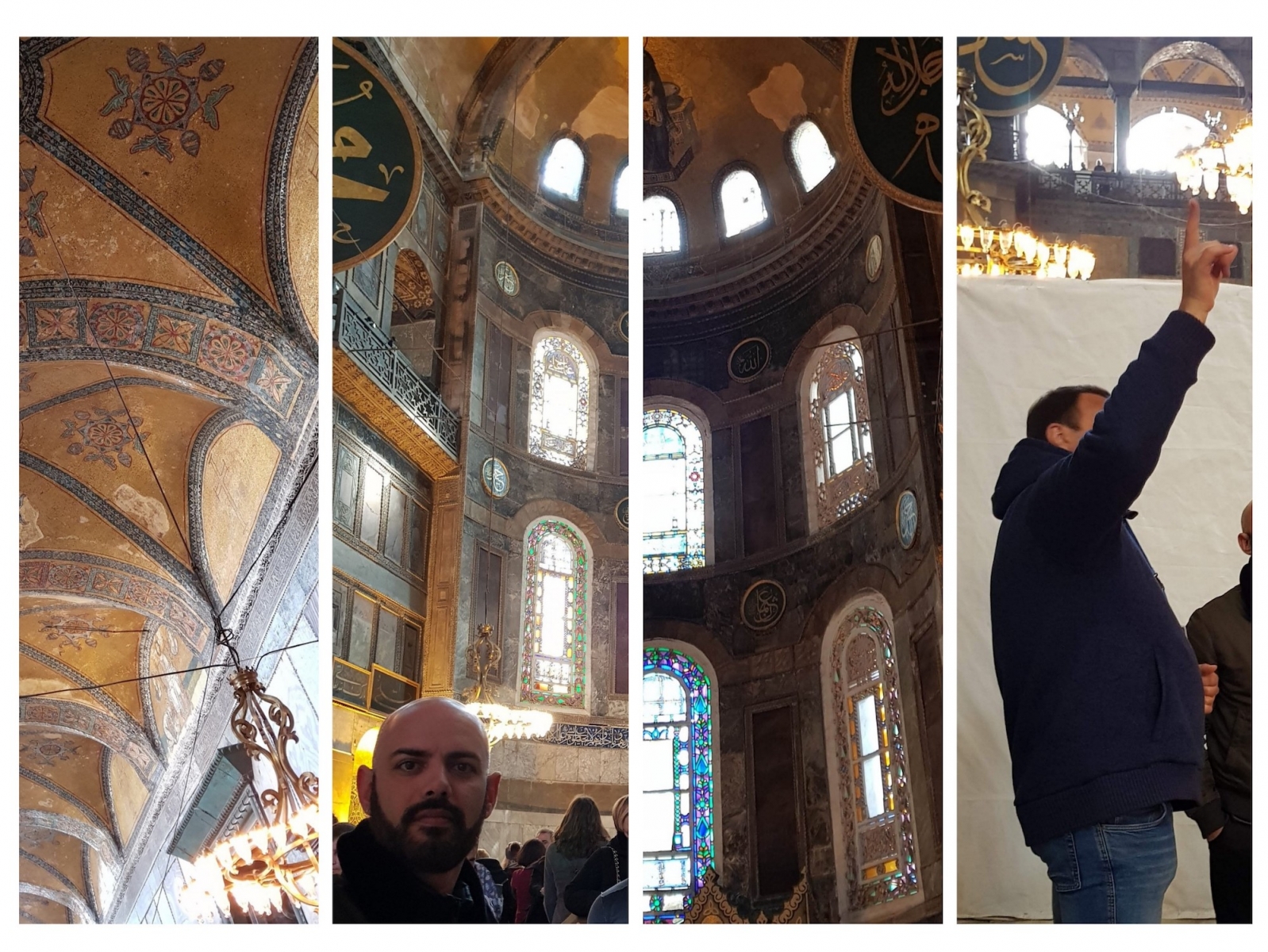 In front of the Hagia Sophia is the Sultan Ahmed Mosque, which is often called the Blue Mosque. It is located literally three hundred meters from the Hagia Sophia, so it is very convenient to watch them as part of one visit with a local personal tour guide who will tell you in detail about the significance of all the architectural elements and decor of these outstanding buildings! 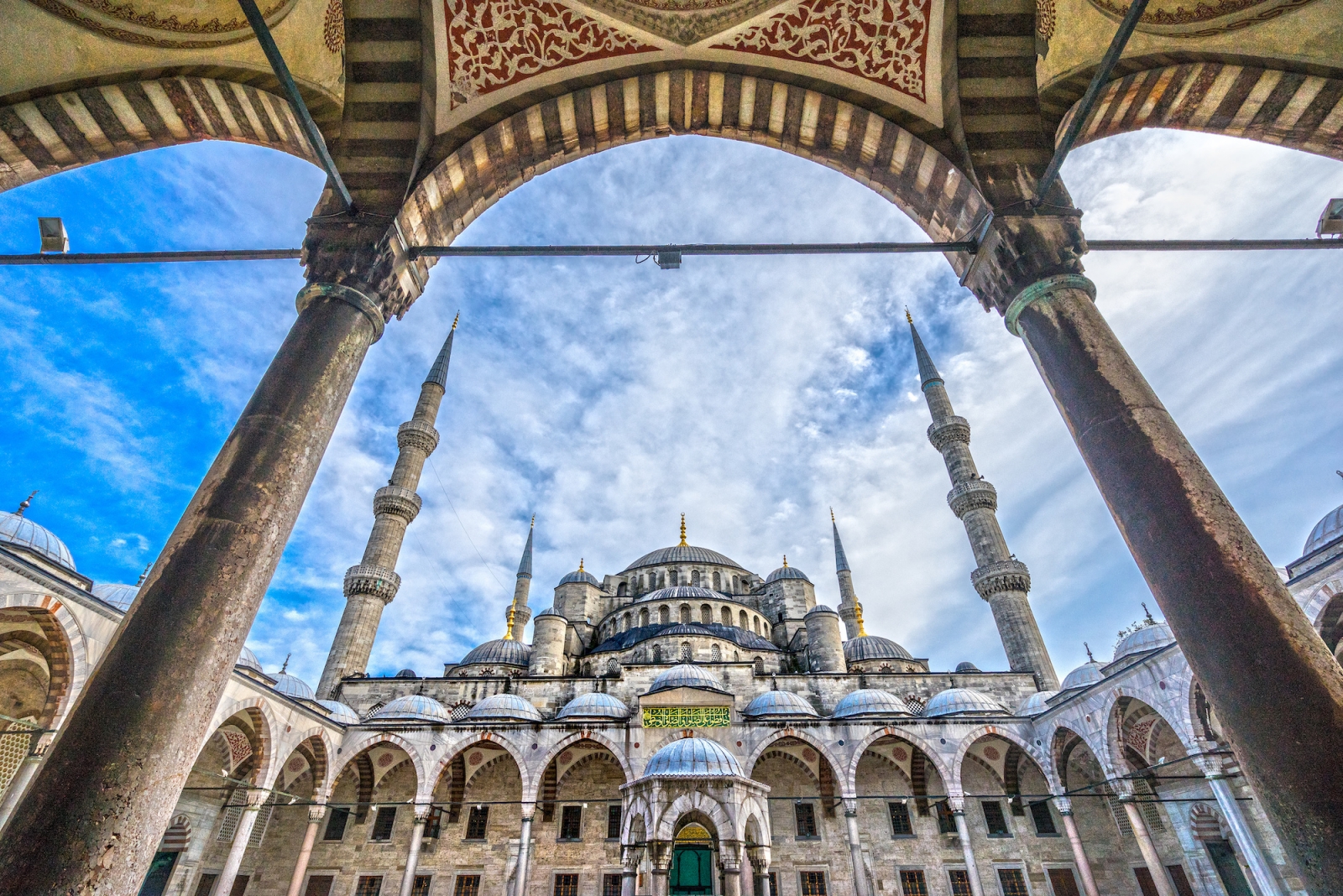 The Blue Mosque is considered the first in importance among all the mosques in Istanbul and an outstanding monument of Ottoman architecture. Its construction was initiated by Sultan Ahmed I at the beginning of the 17th century, he sought to surpass Hagia Sophia in this way and strengthen his own authority, spoiled due to military defeats. According to the ancient tradition of the Sultans, the financing of the construction of mosques was due to military booty, but since the Sultan's troops were not lucky on the battlefield, in order to complete the shrine, he had to go pretty deep inside of his own treasury. 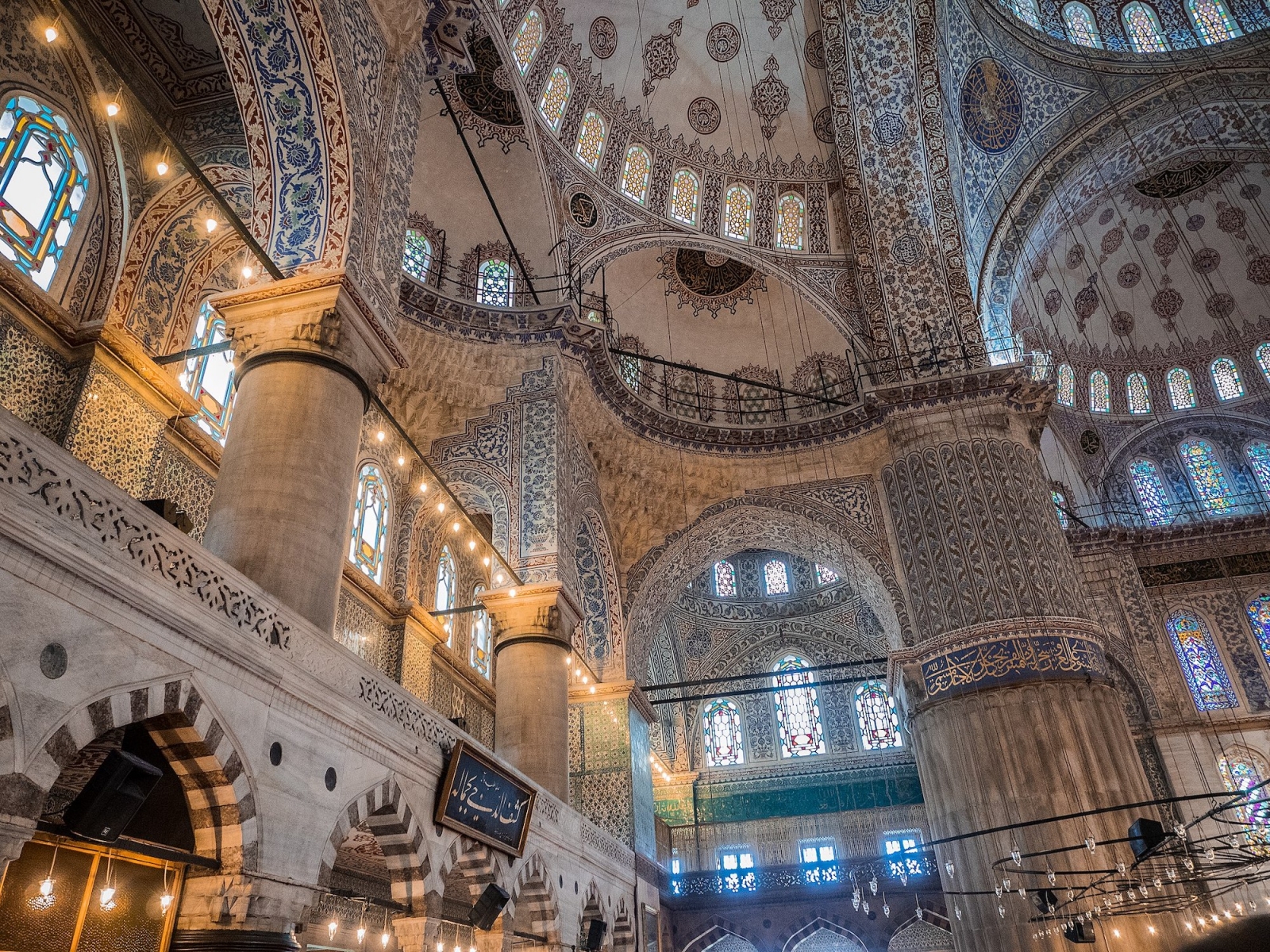 The Blue Mosque is one of the few in the world that has 6 minarets! They say that when the Sultan instructed the architect to build a mosque, the architect, who was already very old and hard of hearing at that time, confused the word “six” and “gold” because in Turkish these words are very similar in pronunciation “Alty” and “Altyn”, he thought that the Sultan wanted 6 minarets for this mosque ... The Sultan had to reconcile the scandal that broke out soon with Mecca, since at that time only there could be the maximum number of minarets - 6, so the Turkish Sultan also financed the construction of an additional minaret in Mecca from his treasure box. 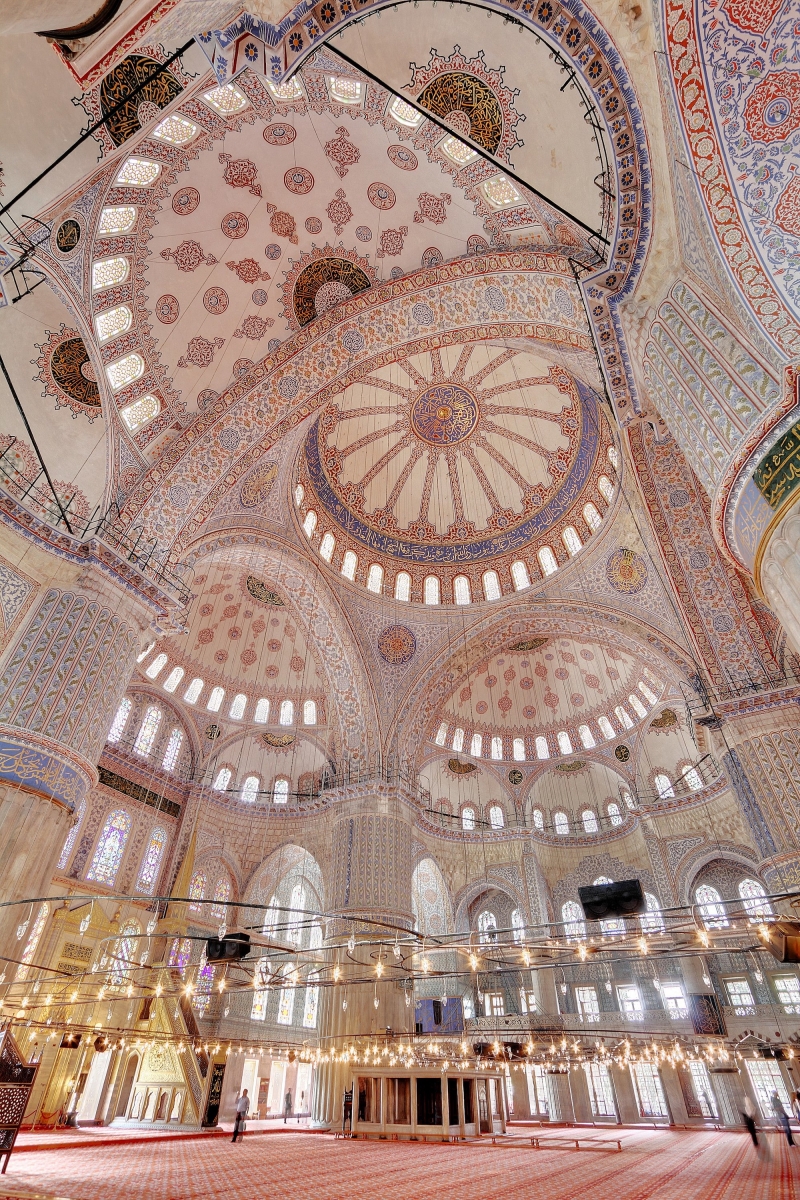 The name "blue" has been fixed for this mosque because of the tens of thousands of white and blue tiles used in interior design. The mihrab, carved from a single piece of marble, deserves special attention during the visit, where a black stone specially brought from Mecca is located. 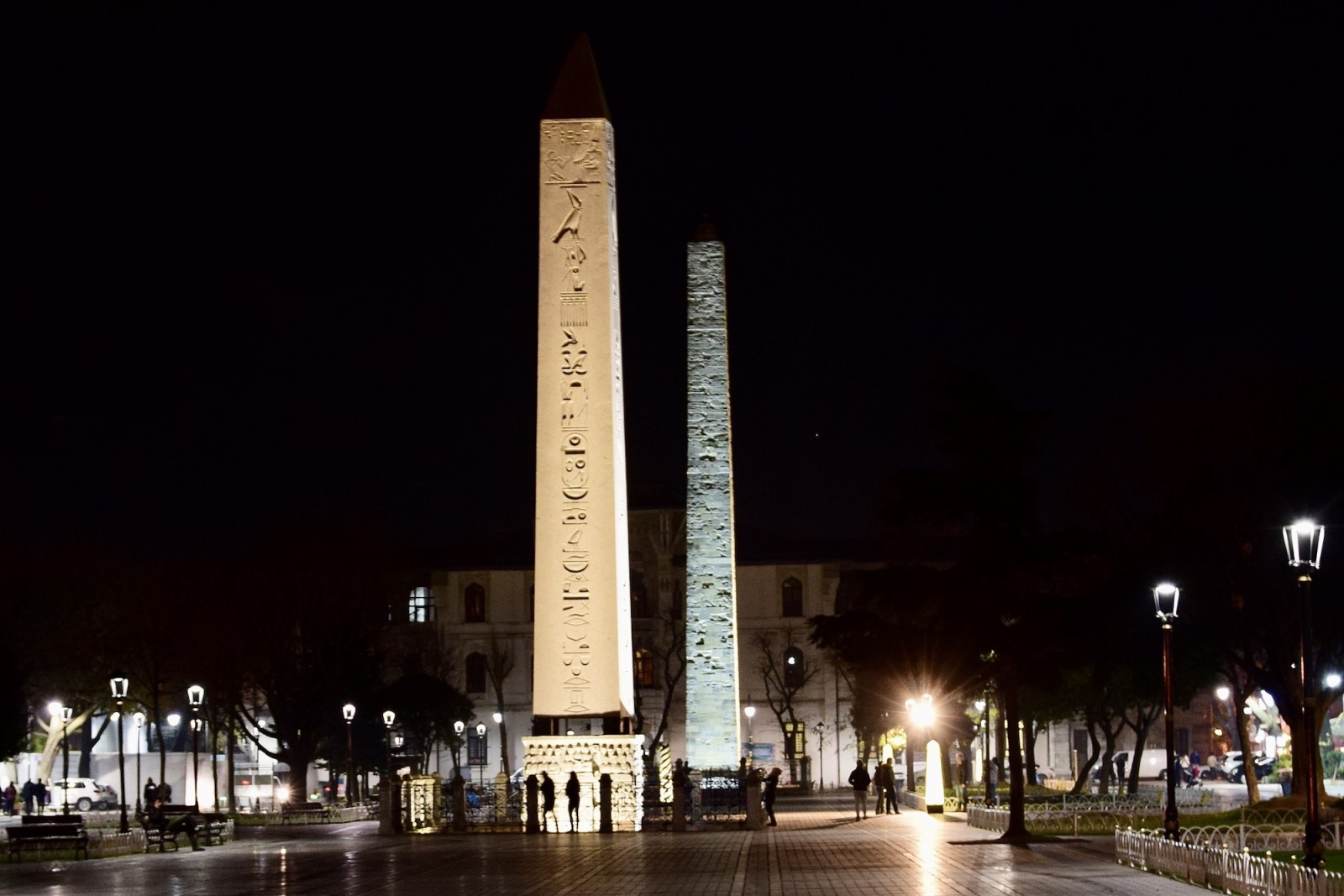 Next stop at Sultan Ahmet Square! You exit the Blue Mosque and enter the long, oblong Sultan Ahmet Square. In fact, between the Hagia Sophia and the Blue Mosque, but a little to the side, there is also Sultan Ahmet Square - this is its unusual shape. This square is located on the site of the former Roman Hippodrome. The construction of the hippodrome was begun by the Roman emperor Septimius Severus in the 3rd century AD and completed under Constantine the Great. Since its construction, the hippodrome has been one of the main structures of Constantinople. In its best times, it could accommodate up to 100,000 people, and today not only the shape of the square, but also a number of ancient monuments have survived on its territory to this day, and the Egyptian Obelisk deserves special attention among them because it reminds of the former grandeur of the huge Roman arena. 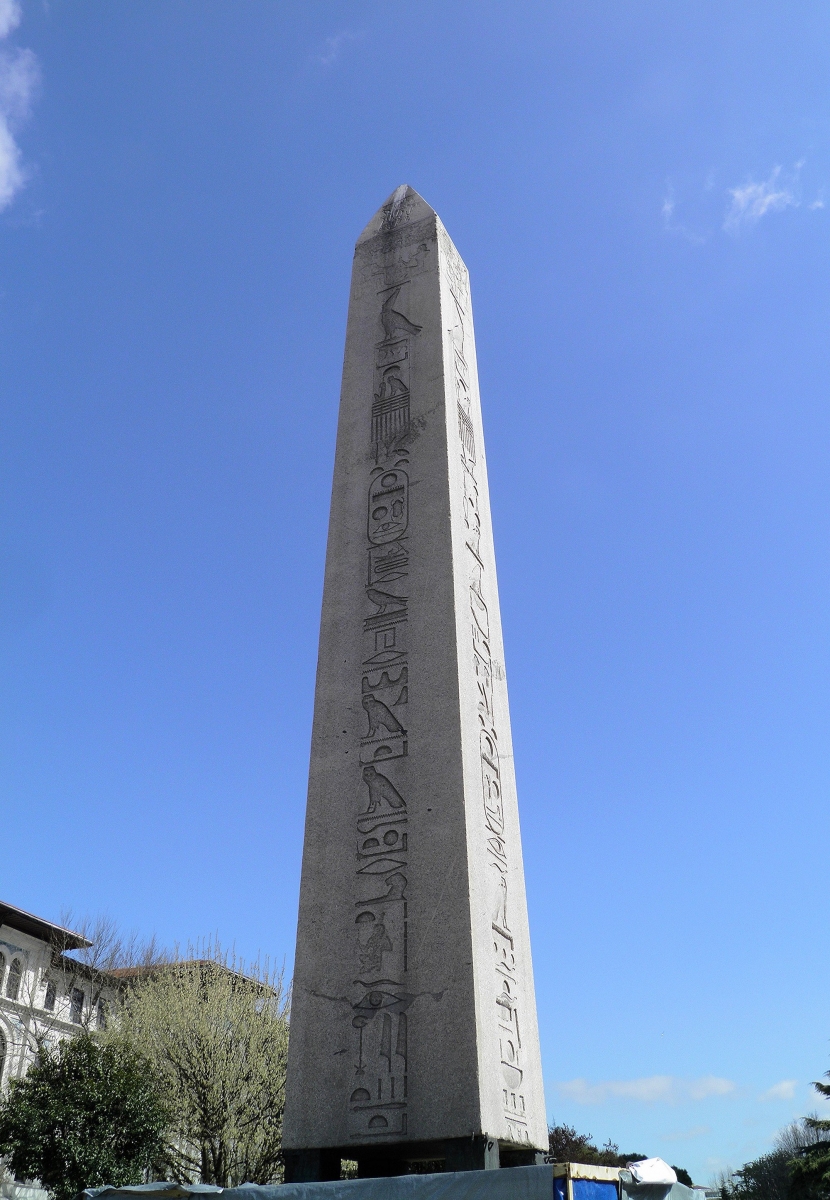 This is perhaps the oldest man-made form in the entire territory of Istanbul, it dates back to the 16th century BC. Previously, this Obelisk adorned the Egyptian temple of Amun-Ra in Thebes, but in the fourth century, thanks to the efforts of Emperor Theodosius, it was taken to Constantinople. The height of the obelisk is about 20 m, and about 7 m more belongs to the pedestal, which depicts scenes from the life of Theodosius. It is noteworthy that initially, the Obelisk was almost twice as high, but during transportation, it split into two almost equal parts, and because of this, only one of these parts was installed at the Hippodrome in Istanbul. 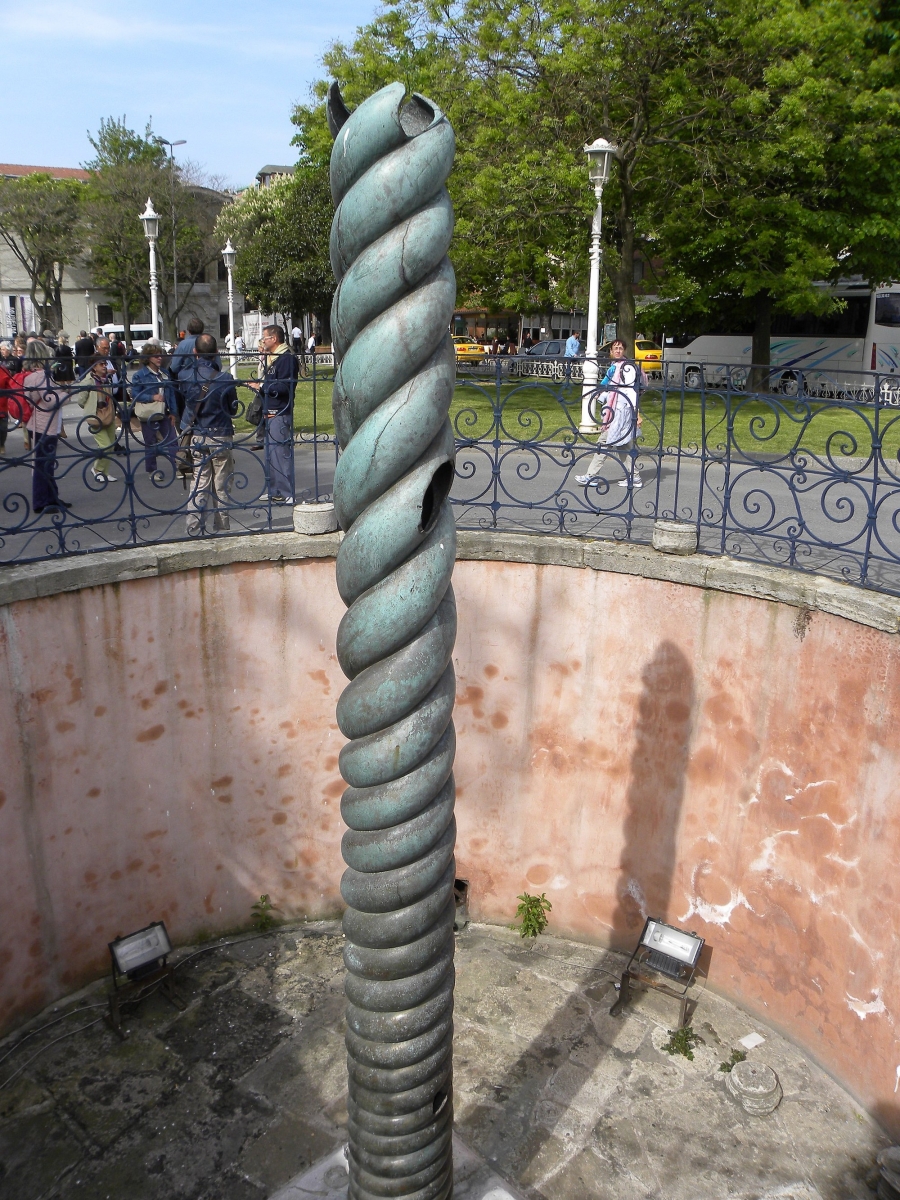 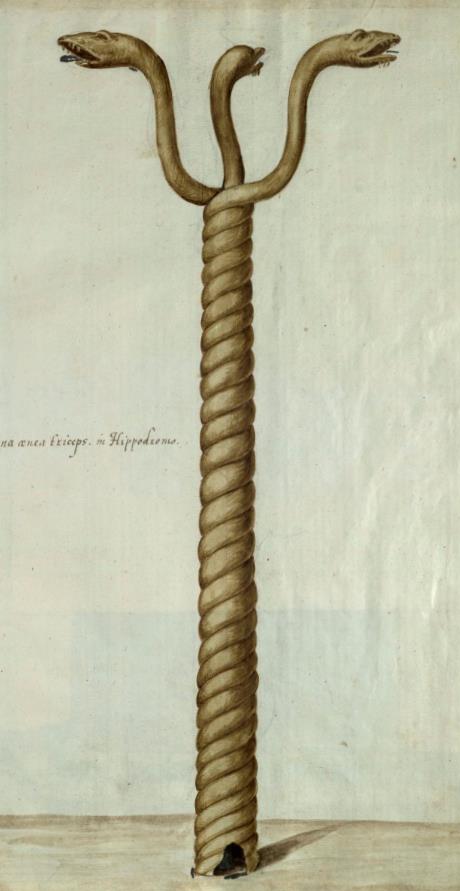 And here is another interesting sight on the square - this is the Serpent Column - this column is notorious for the fact that it was built by the Greeks from the bronze shields of the fallen Persian soldiers in one of the largest land battles of the Greco-Persian wars, which took place in 479 BC on the slopes of Mount Cithaeron near the small town of Plataea in Boeotia. For centuries, this Column adorned one of the most important ancient sanctuaries in Delphi, until Emperor Constantine the Great ordered to transport it to his new capital and installed it at Constantinople’s Hippodrome. Once upon a time, the column was also crowned with three bronze snakeheads, but one of them disappeared without a trace, the second is in the Istanbul Archaeological Museum, and the third is in the British Museum. By the way, one of the decorative elements of the Constantinople hippodrome can be found even in Venice - the famous quadriga adorned St. Mark's Cathedral for hundreds of years and was relatively recently replaced with a replica! It was taken out by the crusaders led by Doge Enrico Dandolo after the capture of Constantinople in 1204. It is believed that this is the finest work of the famous ancient sculptor Lysippus, and its age is more than 6300 years. 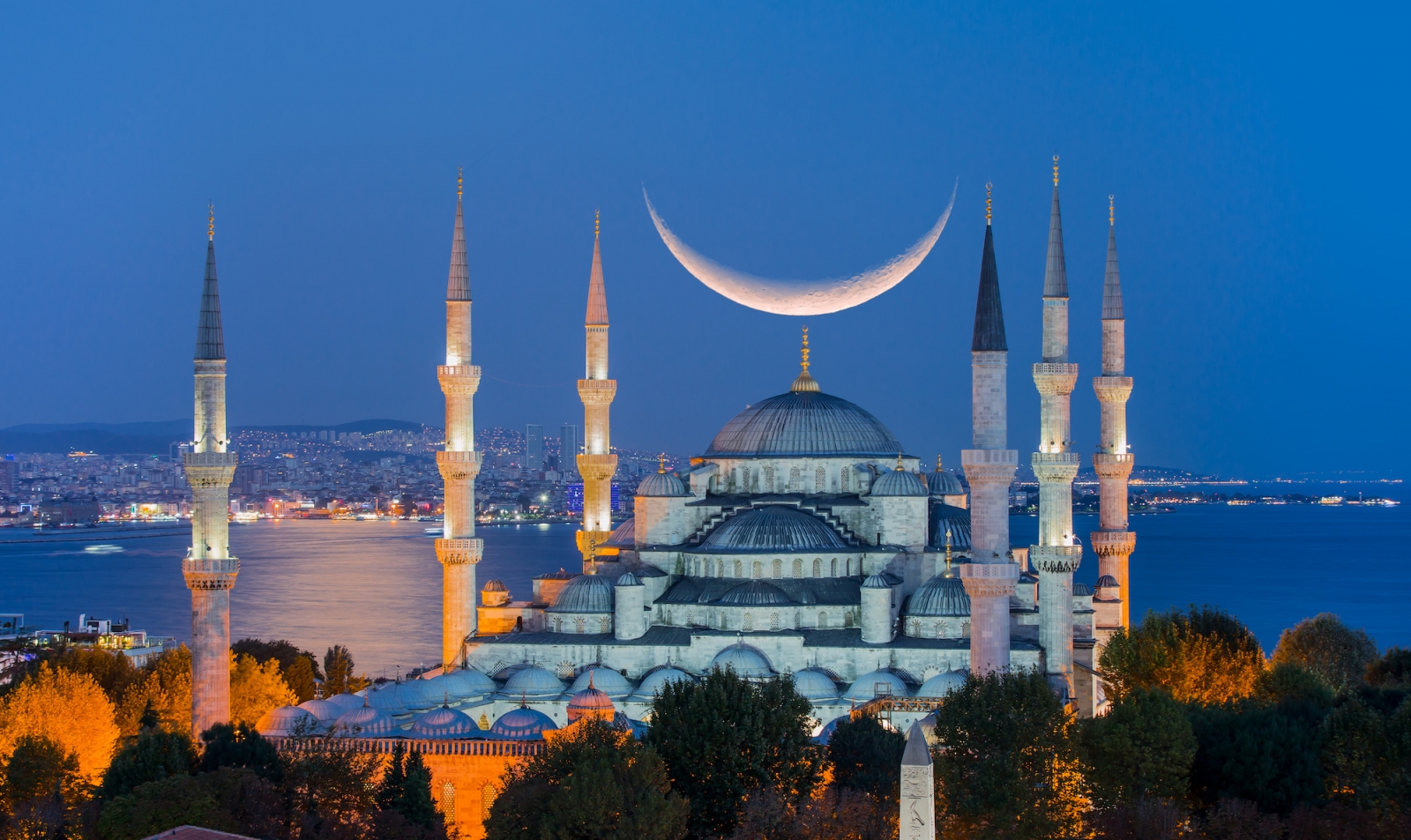 In the following articles, you will continue your acquaintance with Istanbul and its attractions.

Read our previous article The UAE is a country of contrasts